CROMWELL, Conn. – Zach Johnson heads into the weekend one shot back at the Travelers Championship, but he was a matter of seconds away from being tied for the lead.

Johnson had an 18-foot birdie putt on No. 3 at TPC River Highlands, his 12th hole of the day, but left the ball hanging on the lip. As Johnson walked up to tap the ball in, it oscillated on the edge and eventually fell in without being hit.

According to the Rules of Golf, and much to Johnson’s chagrin, the answer was a par. Players are afforded “reasonable” time to walk to the hole, and after that they are allowed to wait for 10 seconds to see if the ball drops of its own accord. After that, it either becomes holed by a player’s stroke, or falls in and leads to a one-shot penalty, resulting in the same score as if the player had hit it.

According to Mark Russell, PGA Tour vice president of rules and competitions, Johnson’s wait time until the ball fell in was between 16 and 18 seconds.

“Once he putts the ball, he’s got a reasonable amount of time to reach the hole,” Russell said. “Then once he reaches the hole, he’s got 10 seconds. After 10 seconds, the ball is deemed to be at rest.”

Johnson tried to emphasize the fact that the ball was oscillating as he stood over it, and even asked rules officials if marking his ball on the edge of the hole would have yielded a “bonus 10 seconds.” But after signing for a 2-under 68 that brought him within a shot of leader Brian Harman, the veteran took the ruling in stride.

“The 10-second rule has always been there. Vague to some degree,” Johnson said. “The bottom line is I went to tap it in after 10 seconds and the ball was moving. At that point, even if the ball is moving, it’s deemed to be at rest because it’s on the lip. Don’t ask me why, but that’s just the way it is.”

While Johnson brushed off any thoughts of the golf gods conspiring against him on the lip, he was beaming with pride about an unconventional par he made on No. 17 en route to a bogey-free round. Johnson sailed his tee shot well right into the water, but after consulting his options he decided to drop on the far side of the hazard near the 16th tee box.

His subsequent approach from 234 yards rolled to within 8 feet, and he calmly drained the putt for an unexpected save.

“I got a great lie. Just opened up a 4-hybrid, and it started over the grandstands and drew in there,” Johnson said. “That’s as good of an up-and-down as I’ve witnessed, or performed.” 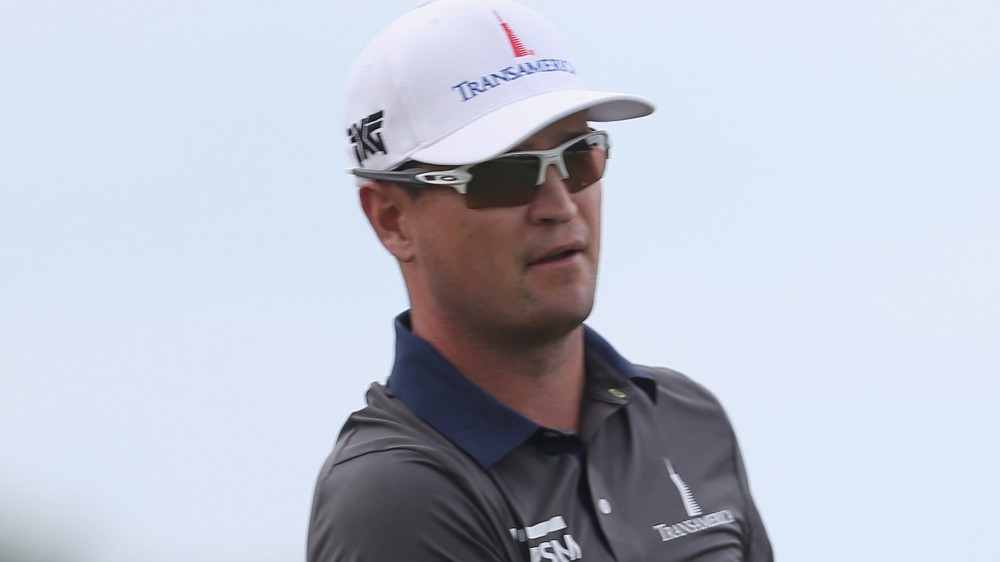