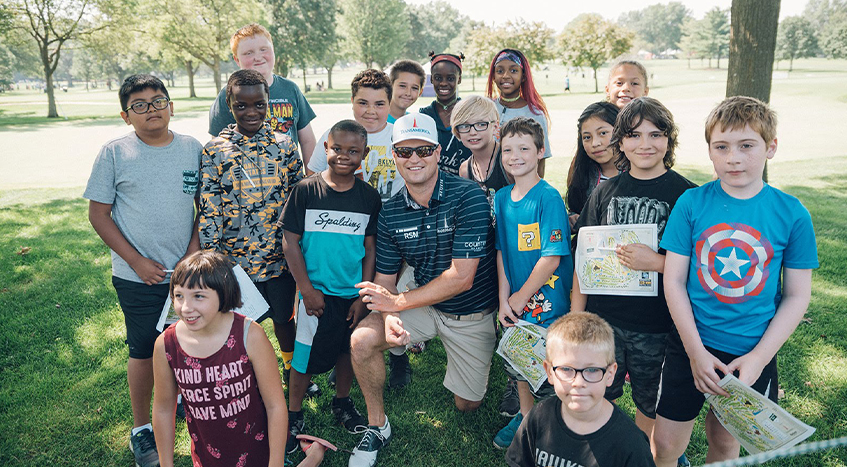 Whether it’s helping underprivileged kids in his home state of Iowa or mentoring young players on TOUR, Zach Johnson has demonstrated his character throughout his career.

That is why he is a deserving recipient of this year’s Payne Stewart Award, which is given to a player for his character, sportsmanship and dedication to charitable giving.

We asked those closest to Zach to share stories that demonstrate who he is, both as a person and a competitor. One common theme arose in speaking to those who know Zach best: he is proud of his Iowa roots and dedicated to creating opportunities for kids to succeed.

Below are 18 stories that illustrate why Zach Johnson was awarded this year’s Payne Stewart Award.

“As Zach’s wife, I get a front row seat to who he is as a man, a husband, a father, a golfer and a friend. It’s difficult to find just one story that highlights his character because there truly are too many to count. However, all of them really come back to one central thing: he always remembers who he is and where he came from. When he won the Masters in 2007 and famously said in his press conference, ‘I’m Zach Johnson, from Cedar Rapids, Iowa,’ that moment encapsulated the essence of my husband. He’s so committed to the people who propelled him to where he is that he is still announced off the tee from Cedar Rapids even though our home is in Georgia. He embodies the idea of “to whom much is given, much is expected.” He is the same solid Midwest boy who married a sweet Southern girl almost 18 years ago. He has always been who he is now. God has just blessed him with a bigger platform to live out his life and he never takes that for granted.”

“During 18 years working with Zach, I’ve seen that serving others is truly a way of life for him. As I reflect on his career to find a story that best reflects who he is, it is a highly personal one that stands above all the others. One of my very best friends was starting to lose a long battle with cancer and it was clear the end was near. I wanted to do something special for him to lift his spirits. I asked Zach if he could help arrange a very special golf trip for Will. First, Zach arranged for Will and I to play East Lake. The club opened on an off day to accommodate us. We were the only two golfers on the course. The second day was unforgettable. Zach had never met Will, but he arranged for us to play Augusta National. Zach didn’t stop there. He drove more than eight hours round-trip to play with us. As we came to Amen Corner and took pictures on Hogan’s Bridge, Will turned to me and said, ‘If this is the last round of golf I play, it’s the best I could imagine.’ Zach making all of these accommodations and the effort to be there for someone he had never met says all I can say about this man that I am honored to call my great friend.”

“We both grew up in Iowa, and one of my best friends was his neighbor, so I’d go over there and play basketball. I was 13 or 14, and we were the older kids, and we wouldn’t take it easy on Zach and the younger guys at all. I’ve since gotten to know him quite well, and it starts with character. When there were floods in Iowa in 2008, and I was doing something for relief in Cedar Rapids, Zach was the first person I called. His attitude was, ‘Where can I help? How can I help? I’m willing to do whatever I can.’ We did something called An Evening with Champions and brought people into a theater for a Q&A session with us sitting up there. We raised more than $40,000. He has a heart for other people.”