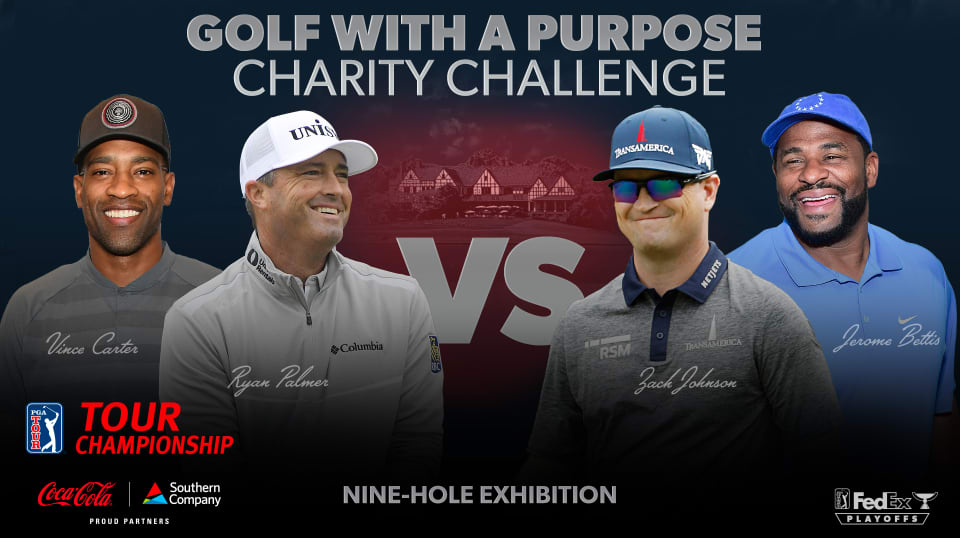 ATLANTA – TOUR Championship officials and the PGA TOUR announced today the creation of the ‘Golf With A Purpose’ Charity Challenge, a televised nine-hole charity exhibition to benefit the East Lake Foundation and the TOUR Championship’s other charitable beneficiaries.

Coverage of the exhibition match will air from 2-4 p.m. (EDT) as a special presentation of PGA TOUR LIVE and will be simulcast on Golf Channel, GOLFTV (internationally) and other PGA TOUR media platforms, including PGA TOUR social channels.

TOUR Championship Proud Partners Coca-Cola and Southern Company, along with several local Atlanta partners, have come together to donate $750,000 through the ‘Golf With A Purpose’ Charity Challenge, with all proceeds benefitting the East Lake Foundation and other tournament charitable beneficiaries.

“This tournament takes a great deal of pride in giving back to the incredibly worthy causes in the East Lake community,” said Allison Fillmore, Executive Director of the TOUR Championship. “Given the unfortunate circumstances created by the COVID-19 pandemic, this charity match provides a unique platform for our partners and fans to pitch in and support the East Lake Foundation and our other charitable beneficiaries who need our support now more than ever.”

When the match reaches the signature par-3 15th hole, the players will be met by Solomon Dobbs (Morehouse College) and Jakari Harris (Hampton University; currently pursuing joint PhD at Georgia Tech and Emory Medical School), two HBCU golfers and former members of the First Tee® of Metro Atlanta. The six players will compete in a closest-to-the-pin contest using hickory clubs in an ode to the great Bobby Jones, who honed his game as a youngster at East Lake Golf Club.

Fans can support the East Lake Foundation’s mission of continued neighborhood revitalization and commitment to advancing and operationalizing racial equity by visiting TOURChampionship.com/Charity.

Following the ‘Golf With A Purpose’ Charity Challenge, the TOUR Championship and the East Lake Foundation are partnering with Ideas United, an Atlanta-based creative studio, to host the inaugural TOUR Championship Golf Ball (http://www.TourGolfBall.com), a virtual fundraising experience that will be streamed live starting at 7 p.m. EDT on Thursday, Sept. 3, the night before the TOUR Championship, and continue through Monday, Sept. 7. Viewers are invited to attend the virtual events and donate for the chance to win exceptional experiences, with all proceeds benefitting the East Lake Foundation, Purpose Built Schools Atlanta and Grove Park Foundation.

The 2020 TOUR Championship is the finale of the FedExCup Playoffs and features the top 30 PGA TOUR players vying for the prestigious FedExCup as the season’s top player. East Lake Golf Club will host its 20th playing of the TOUR Championship from Sept. 4-7, with the tournament to be broadcast live on Golf Channel and NBC.

For more information about the 2020 TOUR Championship, please visit TOURChampionship.com.