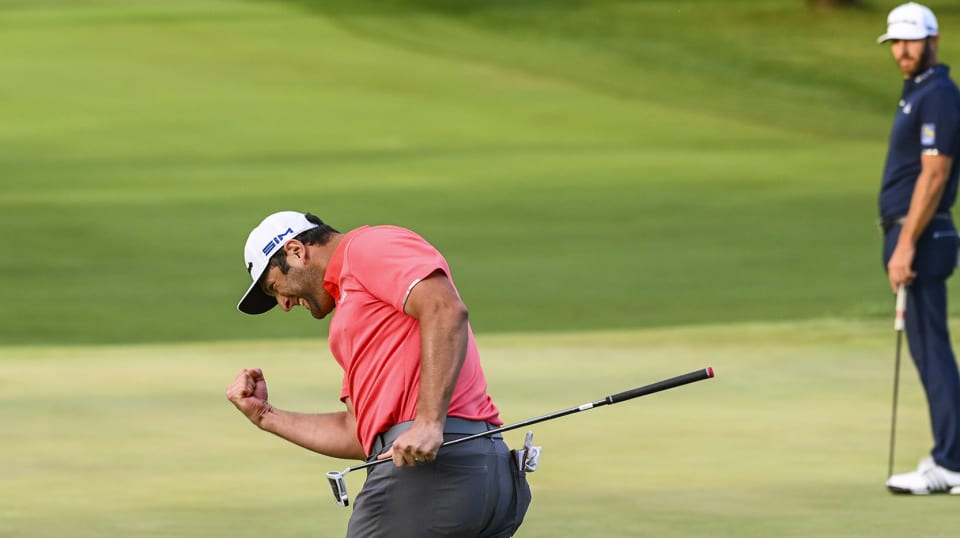 The PGA TOUR’s Player of the Year and Rookie of the Year awards are
up for grabs, as well. Those races are still too close to call. Like the
FedExCup, they could come down to the final putt at Atlanta’s East Lake
Golf Club.

The rookie race comes down to Scottie Scheffler and
Viktor Hovland. Scheffler could be the second consecutive player to win
the Korn Ferry Tour Player of the Year and PGA TOUR Rookie of the Year
awards in consecutive years. Sungjae Im did it last year. Before him,
only one player, Stewart Cink, had accomplished that feat.

Scheffler,
who’s 17th in the FedExCup, finished fourth in both a FedExCup Playoffs
event (THE NORTHERN TRUST) and a major (PGA Championship). He also had
two third-place finishes this season, and shot a 59.

Viktor
Hovland, on the other hand, has something Scheffler does not: a win.
Hovland’s came at the Puerto Rico Open. He also finished third in the
Workday Charity Open and ranks 27th in the FedExCup. He probably needs
to surpass Scheffler this week to have a chance at taking home top
rookie honors.

The race for Player of the Year is much more wide open.

At
least one-fifth of the TOUR Championship field has a chance at the
Player of the Year trophy, which is voted on by the players. Justin
Thomas leads the TOUR with three wins this season, including the World
Golf Championships-FedEx St. Jude Invitational. Another five players
have won twice this season (strangely, we’ve seen more multiple winners
in this shortened season than we did last season). Any of those two-time
winners can lay claim to the Player of the Year Award if they win the
FedExCup. Not only would the TOUR Championship be their third win of the
year, but it would come with the prize of the FedExCup, which awards
season-long excellence.

The group of players with two wins
includes Johnson, Rahm, who has conquered two of the four hardest
courses this season (Muirfield Village, Olympia fields); Webb Simpson, a
medium-length driver thriving in an era of long hitters; Brendon Todd,
whose comeback from oblivion would undoubtedly garner votes from his
peers; and Morikawa, who was beat out by Matthew Wolff for college
golf’s top awards in 2019 but could be PGA TOUR Player of the Year a
year later.

Morikawa starts the first round at East Lake five
strokes behind Johnson. It’s the same position in which McIlroy started
before winning last year’s TOUR Championship and FedExCup.

This
is the second year of the TOUR Champioship’s staggered start. Johnson,
the FedExCup leader, starts at 10 under. Rahm is 8 under. And players
farther down the FedExCup standings will start farther behind Johnson.
Then, come Monday, the final leaderboard also represents the final
FedExCup standings.

One scoreboard. One championship. One trophy.

The
unique format plays mind tricks on the world’s best players, disrupting
their routines and throwing them out of their comfort zones.

Many
would consider the two-shot lead an advantage, but it’s not that easy.
At most tournaments, a player doesn’t hold a lead until Thursday night.
Johnson has been leading the TOUR Championship since he left Olympia
Fields on Sunday night. That wears on a player.

“You essentially
have the pressure of the FedExCup on your shoulders four days in a row,
even though you still need to play really good golf for four rounds,”
Rahm said. “It’s in your mind. Right? We’re constantly getting reminded,
you’re No. 1, you’re No. 2, or your No. 3. I think if you’re behind it
almost helps just because you already know where the leader is at.”

Thomas,
who’d won the FedExCup just two years earlier, arrived at last year’s
TOUR Championship in the pole position of the FedExCup. He couldn’t
maintain the advantage, though, eventually finishing five behind McIlroy
(even with the starting advantage).

“It was weird. Nobody in
golf can say that they have ever teed up on Thursday with a two-shot
lead and leading the entire field, so I (didn’t) know how to react, and
nobody really would,” Thomas said recently. “But I feel like I didn’t
handle it as well as I should have.”

Whoever handles it the best
this week can lay claim to being the best player in a PGA TOUR season
unlike any other. That’s a prize worth fighting for.