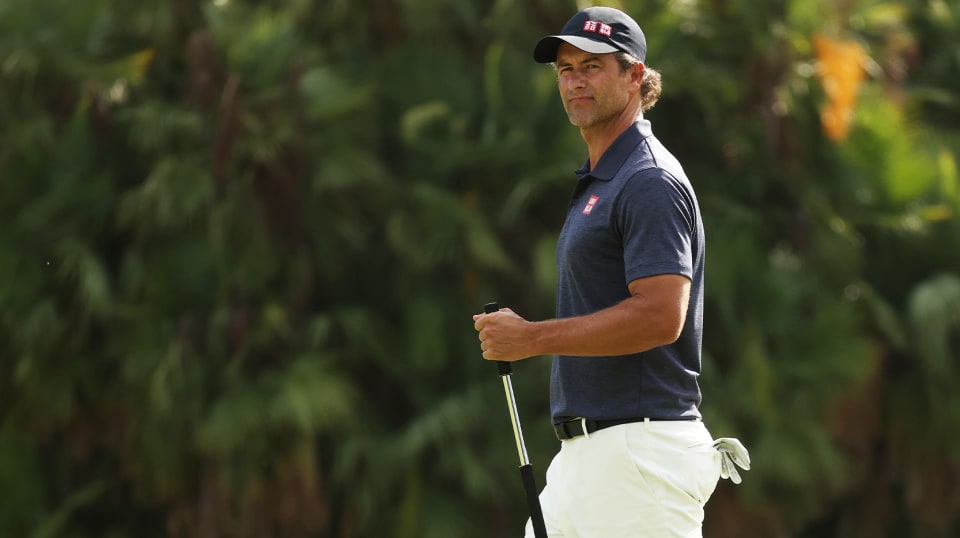 LOS ANGELES – The COVID-19 pandemic has not been welcomed by anyone, but professionally speaking it really hit The Genesis Invitational defending champion Adam Scott hard.

The affable Australian was in the midst of hitting a purple patch of form and his win at Riviera Country Club a year ago was a drought-breaker that had him trending back to the top of world golf.

Scott had made a pact of sorts with his fellow International Team members from the Presidents Cup in December 2019 after they let a golden opportunity slip to be the dominant U.S. at Royal Melbourne. No longer could they fail to capitalize on opportunities they’d earned, and they vowed to use the time between Cups to make it a point to close well.

Immediately, Scott won in his native country at the Australian PGA Championship and then he watched on as Cameron Smith (Sony Open) and Marc Leishman (Farmers Insurance Open) won on the PGA TOUR in early 2020. It spurred him to capture his second title at The Genesis Invitational after going nearly four years without a TOUR victory a year ago.

The former World No. 1 reentered the top 10 in the global rankings with his win, a place he hadn’t been since early June 2017, and sat there when the pandemic forced the postponement of the season.

Logistically this caused necessary quick thinking for Scott and his young family. As things shut down around the world, Scott made the call to return to Australia where they could all enjoy the sun and sand of Queensland. He didn’t know at the time he’d be there quite a while.

Scott had been based in the Bahamas for quite a few years, but had decided on a relocation to his previous base in Switzerland as his now three kids begin to grow and head towards school age. So as things escalated, they had to choose Europe or Australia for the short term – and down under it was.

As one of the longer hold outs – partly due to travel issues – Scott wouldn’t return to the PGA TOUR until the PGA Championship in August, nearly five months from when THE PLAYERS Championship was cancelled. The family then made the move to Europe adding multiple different dimensions of quarantining between events.

Amongst it all, any on course momentum was well and truly lost even before Scott tested positive for the virus himself in Los Angeles ahead of the ZOZO CHAMPIONSHIP @ SHERWOOD in late October. Add the fact his trainer lived in Hawaii and his coach lived in the UK – meaning the three could not get together either on site or anywhere without massive undertakings – and you can see why his first top 10 since the win last year came in his last start at the Farmers Insurance Open last month.

As the chaos somewhat tempered, Scott was able to refocus over the new year and with the benefit of experience, he set plans in place to make the most of the new norms. Now he’s ready to attack just as he was 12 months ago.

“I don’t want to sound like I’m making excuses from what’s happened so my focus is on the fact I’ve got a good plan in place for this year, and I like when my game is from last year to now. I’m definitely ready to rumble,” Scott said.

“At some point your life balance and your priorities change, and they had changed before Covid for me with three kids in the last five years. Thanks to a very supportive wife I’m in a good spot with it and I’m just trying to make the most of it while I’m out here.”

The specifics of the plan might be a little guarded by team Scott as they search for competitive edge, but suffice to say it’s incredibly thought out and detailed. Coach Brad Malone was indeed onsite at Torrey Pines in the lead up to the tournament.

“Trips have to be planned very well so I don’t end up spending all my time quarantining. I ended up doing about eight weeks of quarantine time last year going back and forth,” Scott says.

“One of the problems is the goal posts are always moving and generally there’s just less freedoms to move about to do what you want. We’re all used to staying in hotels and traveling but when you have to book a gym, and only two people are allowed in, and you can’t get the time you want before your tee time, well there’s lots of all these little things that probably aren’t a big deal but most of us are creatures of habit and have routines and we might even be superstitious.

“These annoying things and frustrations are no doubt felt by everyone in these times – and clearly out of the golf bubble there are a lot bigger problems in the world – but when you’re out here on TOUR trying to do a job, the smallest margins can make a difference.”

Scott, a 14-time TOUR winner, looks at the dominant windows players have had over the last decade as proof he can reach his goal of hitting 20 wins. He also desperately wants some big scalps to go with his PLAYERS win and 2013 Masters title. The 40-year-old pointed to Brooks Koepka and Dustin Johnson having juicy winning runs and even Jordan Spieth and Jason Day who both won five times in 2015.

“I guess the break last year was less ideal for a player around my age compared to the younger guys. As the TOUR shut down at the end of last year my form was really close to what it was like when I was no.1 in the world but I just never played that good when we came back,” Scott says.

“It’s simple though. I have to figure out a way to get it done. Even under these difficult circumstances, if I’m going to come out and play, I want to come out and contend and not just make up numbers.

“I’ve got to be sharp while I’m out here and not waste the weeks I build towards. My game is really close to that point so I’m happy with that. My goals haven’t changed. I’m trying to get myself right up there for the season of championships. There’s something big every month from THE PLAYERS through the Opens and the Playoffs. I’m excited for what’s to come through this year.”