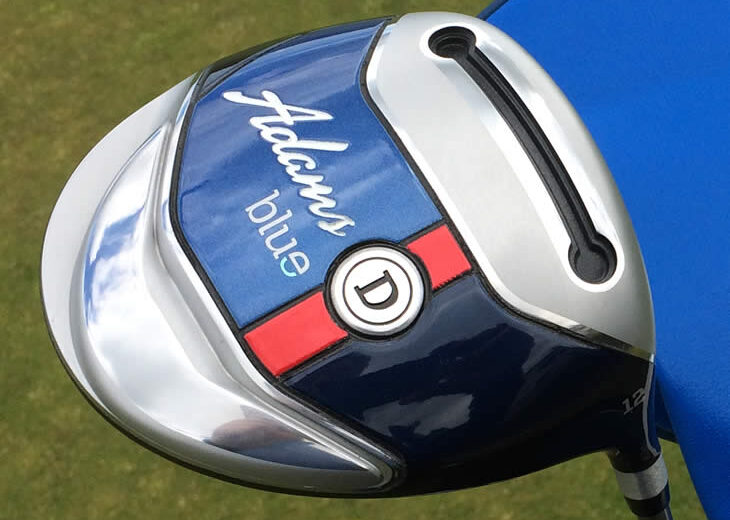 Adams Blue Driver Review – The Adams Blue driver is meant to get you more air and by that they mean more under the ball as it sails through the stuff. 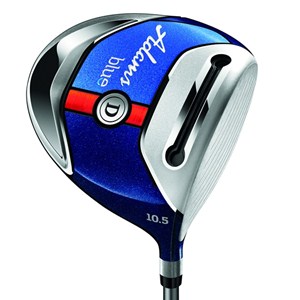 How can they say this? Well, they have used three tried and trusted techniques to maximise launch angle and speed in a simplified approach.

Firstly the large 460cc titanium head has the Centre of Gravity (CG) location low and as far back as possible as that puts some more spin on the ball and provides that nice high launch angle.

The head does look quite rounded at address with a relatively short face for this size of driver, although it is not what I would call compact. This is the 12° version, but even with that extra loft I felt it sat a little too closed and certainly more so than the other Adams Blue woods.

It is a very forgiving face and the brushed steel finish contrasts with the dark blue crown at address to help with alignment. If you look carefully you can also see a couple of contrasting blue lines that are curved instead of straight across like they are on the Adams Blue hybrid and fairway.

On the other Adams Blue woods, these lines can help as an alignment aid, but as curves they are more cosmetic, which is a bit disappointing. The Adams ‘A’ logo graphic does have a function to point out the sweet spot, even if it does seem to look more like a Pinterest logo from a distance.

Anyway, I digress. To generate more ball speed you need to move the head faster and Adams has paired the head with a very light 55g Aldila Slimtech graphite shaft. This has a tip that is 0.76mm or 0.03 inches narrower than standard to give a bit more kick at impact.

The 45.5 inch shaft was easy to manage, extremely light to swing and the feel was very good. It just shows how much shaft design has moved on in the last few years that a shaft this light and long can still be stable and not behave like a fishing rod wobbling home after a night out on the town.

Finally to make the face faster Adams has added their renowned Velocity Slot to the sole of the Blue driver and this is the largest one I have seen. The dumbbell shape extends across the width of the face and enables it to flex more at impact to increase the ball speed from that faster travelling head.

If Adams want us to think of blue skies then the driver certainly takes you there as the trajectory was one of the highest I have experienced for drivers with this amount of loft, and it felt relatively higher than the more normal trajectory of the hybrid.

The sound was solid and light and I do like everything about the feel at impact, so there is nothing to pull it up on as the design, styling and performance is simple and clear.

The Adams Blue driver comes with a retro style headcover that looks good, although it could do with nip and tuck around the top to fit a little better.

Having tried most of the Blue range I think TaylorMade, who own Adams, has done a good job of relaunching Adams, as all the Blue products are very easy to hit.

The Adams Blue driver seems a little different to the irons and hybrid, as this is the one I feel that is aimed more at those slower swing speed players who just need more help getting the ball up and away. It is maybe more niche than the irons and hybrid and therefore could be why the price is similar to most other drivers, unlike the irons which are very competitive.

However if a light, high launching driver is what you are after then the sky is the limit for you with the Adams Blue driver.