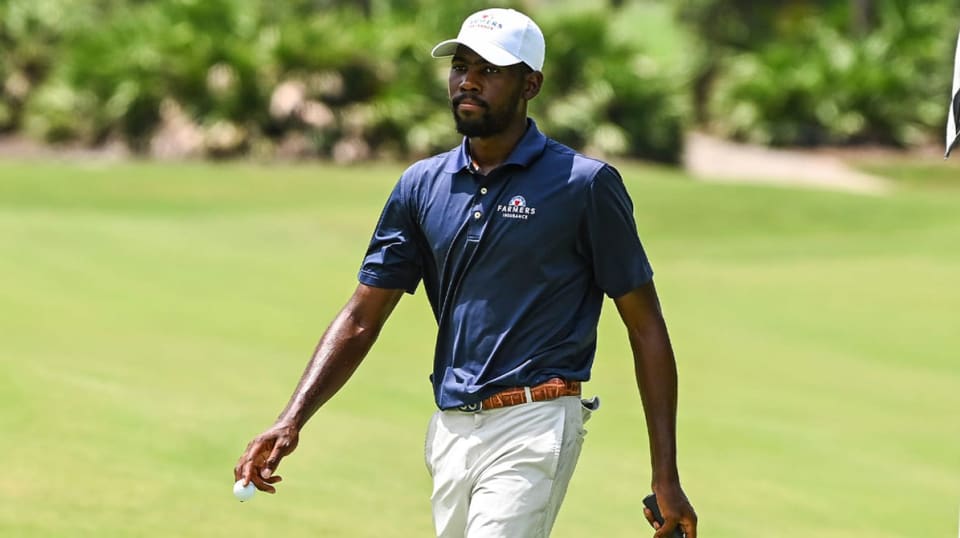 “We value diversity and are proud to help support the APGA Tour in its mission to level the playing field for many talented golfers,” Farmers CEO Dailey said in announcing the invitation in October. “The APGA is doing incredible work to expand the game of golf, and we are thrilled to be able to provide Kamaiu the chance to play in his first-ever PGA TOUR tournament.”

Johnson was beyond thrilled. What happens when APGA Tour meets PGA TOUR?

“We’re about to find out,” says Johnson, who lives in Orlando with roommate and PGA TOUR Latinoamérica player Keith Greene. “There are really good players on the APGA Tour that, if they got more opportunities, could play on the PGA TOUR. People don’t understand how much it takes to get through Q-School and everything. It’s a lot of money.

“We have to put ourselves in position to take advantage of those opportunities,” he continues. “Make it to the weekend and show we can play out there just like those guys.”

The key word there is opportunities. Last summer TOUR Commissioner Jay Monahan pledged $100 million to help address disparities faced by African Americans and other under-represented groups. The TOUR’s alliance with the APGA Tour, and Farmers, is part of that.

Ken Bentley, CEO of the APGA Tour, says success stories like Johnson’s show the APGA is living out its mission to place people of color not just on TOUR but also in pro shops and boardrooms.

“I go back to a press conference Kamaiu did at the Farmers last year,” Bentley says. “He said his goal was to get back to Torrey but on the South Course. Now he’s got that opportunity. It’s great for us. It puts another spotlight on our tour and shows how good our guys are, and that guys who do well on our tour will get other opportunities. Life has really changed for him.”

That’s for sure. He’s also been given a sponsor’s exemption to compete in the Korn Ferry Tour’s Emerald Coast Golf Classic at Sandestin in Destin, Florida, in early April.

A bed under the table

Johnson was lost before he found golf. Put in slow-learner classes in school, he got discouraged and dropped out. Living with his grandmother and six other family members in a two-bedroom apartment in Section 8 housing, he slept under the dining room table.

Golf came into his life by chance on a day when he was skipping school and swinging a stick outside his grandmother’s apartment complex, which bordered Hilaman.

“I thought it was a golf club,” Auger says. “When I saw that it was a stick it made me laugh. It wasn’t like he was addressing the ball, but it had the fluidity of a golf swing.”

She invited him back to Hilaman, and they cobbled together some clubs. He showed promise even if he couldn’t beat Johnnie Lee Brown, a Hilaman regular who once shot 59 at Gaither. Local businesses and others chipped in for equipment, lessons and tournament entry fees.

When his mom temporarily relocated for work, Johnson lived with Ramon Alexander, who mentored young Black men and later became a member of the Florida House of Representatives. For two years, the arrangement provided Johnson much-needed stability. He kept playing golf.

At 19, he finally beat Brown, and when he won the first of his four Tallahassee Opens, the first thing he did was bring Sykes to the pro shop to buy him a hat with his merchandise credit.

For Auger, who was standing behind the counter, the gesture meant even more than the victory.

“I thought wow, he’s grown up to be such a good person,” she says. “I’d call Hank sometimes if Kamaiu was giving me a hard time, and Hank would straighten him out.”

Adds Sykes, whose brother, Freddie, played wide receiver for the New England Patriots, “It’s a good hat. Seminoles. I still got it. He was 12 or 13 when I first seen him and started talkin’ to him, and we became real good friends. I didn’t teach him a lot of golf, but I taught him how to act. Yes, sir. No, ma’am. It was a community thing to teach him how to play golf.”