LAKE FOREST, Ill. – Thanks to one of the more improbable – and lengthy – pars on the final hole in BMW Championship history, Sergio Garcia is on to East Lake.

The Spaniard drew play to a grinding halt at Conway Farms Golf Club when his discussion with rules official Stephen Cox and eventual drop within a water hazard lining the final green took more than 20 minutes to sort out.

Garcia’s approach to the par-5 18th hole found the hazard, and his ball was situated next to a rock, making a play directly toward the hole impossible. But Garcia channeled some creativity and started to map out a swing where he would hit the ball backwards and bounce it off the rock toward the green, similar to the type of shot players sometimes attempt on the 17th hole at St. Andrews.

“I knew if I got good contact on it, it would pop up and probably go in the grandstand behind the green,” Garcia said. “We started looking at that.”

The plot thickened, however, because Garcia’s backswing and follow-through were obstructed by the grandstand and awning lining the right side of the green. It led to a lengthy discussion with Cox, who ultimately granted Garcia free relief from the temporary immovable obstruction.

While Rule 24-2 does not allow a player to take relief from a movable obstruction when in a hazard, Cox explained that the temporary nature of the obstruction made Garcia eligible to receive a free drop, provided he remained inside the hazard.

Garcia eventually placed his ball after his first two drop attempts bounced closer to the hole. His third shot eventually bounced over the green, but he was able to get up and down for par to salvage a final-round 69 and book his ticket to the Tour Championship.

“Obviously any other day when the stands are not there, you’re in the hazard, and just play it if you want to play it,” Garcia said. “But because the grandstands are there, and the rules are there, I was able to take relief from it and it kind of worked out well for me.” 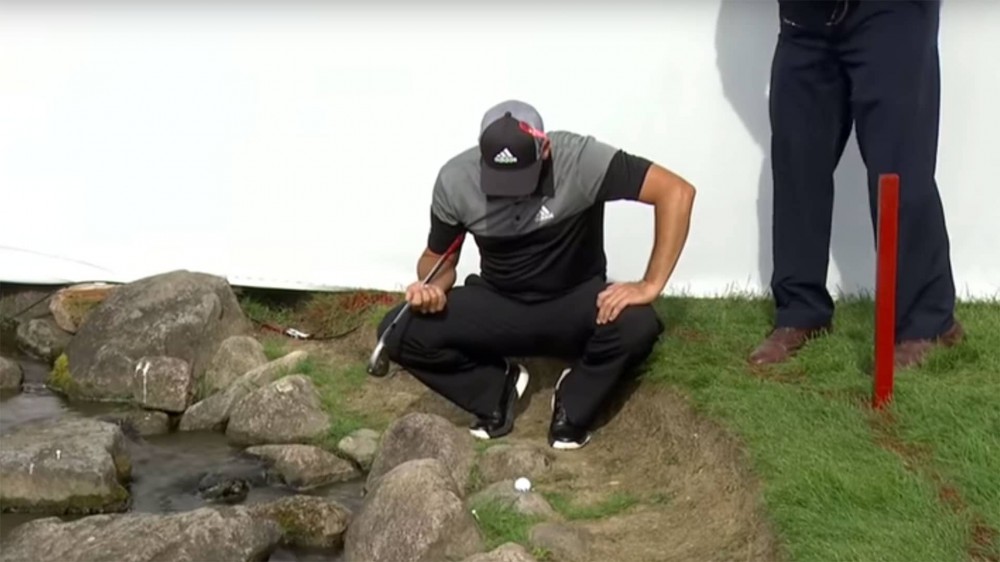