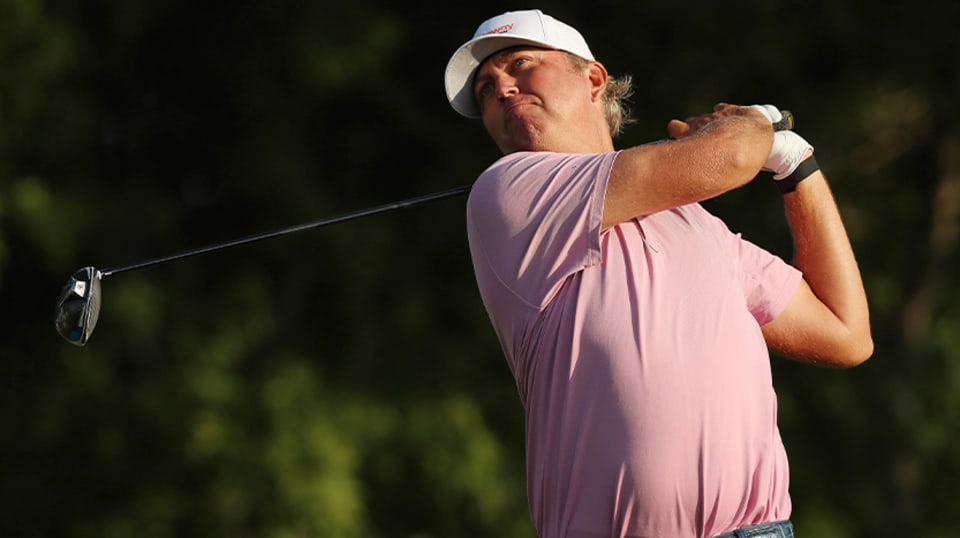 BLAINE, Minn. – When Bo Van Pelt teed it up at the Safeway Open earlier this year, it had been 1,321 days since his last PGA TOUR start.

Let that number sink in for a minute.

That’s more than three-and-a-half years sucked out of Van Pelt’s career, which was interrupted first by surgery to repair a torn labrum in his right shoulder, secondly by a procedure to clean out bone spurs and lastly by an operation to remove one of his ribs.

Small wonder, then, that the 45-year-old veteran was so encouraged by his performance through two rounds at the 3M Open. Van Pelt fired a 68 on Friday to go with an opening 66 – the first time he’d broken 70 in consecutive rounds this year – and is just four strokes off the lead.

Some players in his position would have given up, content with a life of playing client golf. Van Pelt, after all, had earned more than $20 million during a PGA TOUR career that included one victory at the now-defunct U.S. Bank Championship in Milwaukee so making money wasn’t top of mind.

But he wanted to see if he could still compete at the highest level – and at least through 36 holes at TPC Twin Cities, Van Pelt has been equal to the task.

“It’s like I told my wife and my kids, this is going to be the hardest thing I ever had to do is to try to compete out here at 45 after taking almost four years off,” Van Pelt said. “I don’t think there’s anybody probably ever done it.

“But I like where my game’s going. It’s hard to just keep rah-rahing yourself when you’re shooting over par, so it’s nice to kind of put some red on the board and hopefully this will be some momentum going the right way.”

The 2019-20 season has certainly been a challenge for Van Pelt. He wasn’t able to start playing 18 holes until several weeks before returning to the TOUR at the Safeway Open, where he tied for 62nd. Until this week, that was one of just three checks he’d cashed in 15 starts.

Van Pelt said the four-month COVID layoff worked in his favor, though, because it gave the former Oklahoma State standout time to knuckle down and really concentrate on his game.

“Even though my results haven’t been great this first month, the way I’ve been playing’s been a lot better,” Van Pelt said. “Just kind of sticking with it. It was just hard. I didn’t play 18 holes for over three years.

“Basically, I was trying to relearn every kind of feel that I had less than a year ago. Yeah, it’s just been kind of a process. Finally feeling like I’m getting back to where I can compete again.”

Van Pelt’s physical problems began in 2016, likely after he reached behind the driver’s seat of his car to pick up a backpack that was heavier than he expected.

A few weeks later, the pain in his right shoulder ratcheted up on the weekend of the Waste Management Phoenix Open as a pair of 74s turned a solid 6 under start into a tie for 51st. So, after he missed the cut at Pebble Beach the following week, Van Pelt headed home to Tulsa, Oklahoma, to find out what the problem was.

“I tore like 85 percent of my labrum and I just couldn’t play,” Van Pelt said, remembering the diagnosis. “So, they went back in and found a bunch of bone spurs, cleaned it out, thought that was going to do it.”

When his hand started going numb, Van Pelt was really worried. In truth, he feared he might never play again. So, his doctor referred him to Dr. Greg Pearl in Dallas.

This time, the diagnosis was thoracic outlet syndrome which occurs when blood vessels or nerves in the space between your collarbone and first rib are compressed.

“So, they said on top of the torn labrum, (that’s) what I had going on,” Van Pelt said. “That’s why I kept getting a pinch and pain. He removed my first rib I guess a year and a half ago in February and it just gave me the opportunity to play.”

Van Pelt made this week’s highlight reel when his 6-iron at the eighth hole on Thursday found the bottom of the cup for an ace. It was a nice way to bounce back from a bogey that had ended a run of four birdies in his previous five holes.

“It was great,” Van Pelt said. “I was playing well and bummed about bogeying 7, so it was a great bounce-back. It was funny, I mean, half the holes-in-one I ever had have been with a 6-iron, so that has been my lucky club.”

And time will tell if this is his lucky week.