After viral 2016 photo, Fowler happy fiancée is in Paris

SAINT-QUENTIN-EN-YVELINES, France – One of the most memorable images from the Ryder Cup two years ago at Hazeltine happened when it was all over. The Americans won handily 17-11, the closing ceremony was complete, and it was time for the red, white and blue to party.

Each player turned to his significant other for a warm embrace and a nice celebratory kiss. But there was Rickie Fowler, shoulders shrugged, standing in the middle, with no one to love. He was the only one of the 12-member team in Minnesota that week without a wife or girlfriend.

This year, Fowler has fiancée Allison Stokke by his side. The two were engaged in early June, just before the U.S. Open.

“It was great being over and being part of these team events and just be on my own and get to see them and be a part of them, but yeah, it’s a lot better having someone you actually get to share it with and not go back to your room and be by yourself,” Fowler said Thursday at Le Golf National. “You get to hear about the day and what the girls did, and I can talk to Allison and tell her what’s going on, what we did at the course, or whatever.”

Fowler, 29, is playing in his fourth Ryder Cup for the U.S., but has a meager 2-4-5 record. In fact, Fowler failed to earn a full point in each of this first two Ryder Cup experiences, going a combined 0-3-5. But two years ago Fowler found his footing by winning a foursomes match with Phil Mickelson and his singles match over Justin Rose.

Despite being winless this year on the PGA Tour, Fowler believes his form is closer to that of Hazeltine than it was in 2010 in Wales and 2014 at Gleneagles.

“It would be nice if we can be successful this week and relive that picture (from two years ago) and I’ll actually have someone to kiss,” Fowler said. “We can make fun of Bryson on this one or something.”

Bryson DeChambeau was the only player without a significant other in Wednesday night’s gala photo for the U.S. squad at the Palace of Versailles. 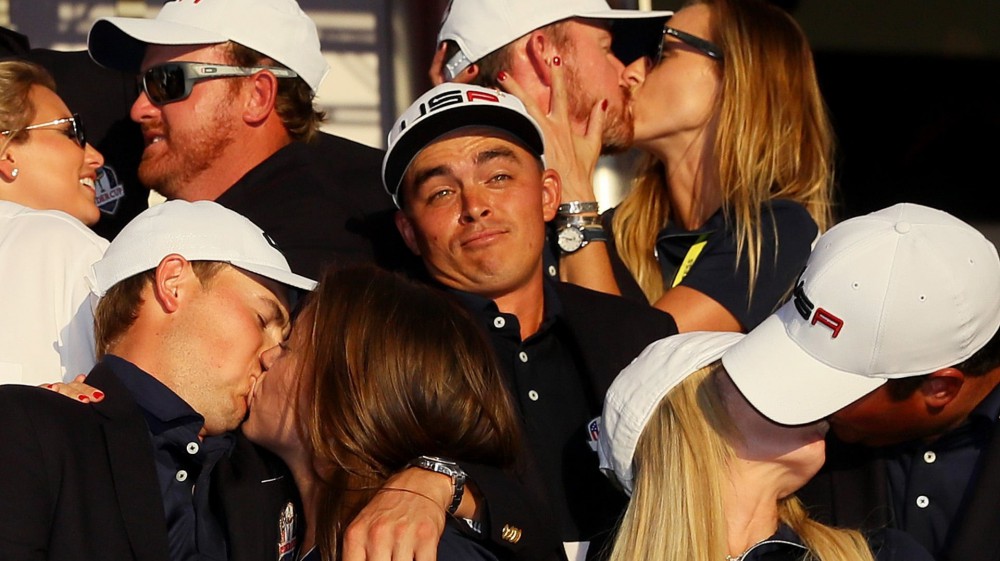 Putting with eyes closed, Sergio Garcia in the mix at Sanderson Farms