SAINT-QUENTIN-EN-YVELINES, France – With the U.S. facing an 8-4 deficit at the Ryder Cup, captain Jim Furyk has opted to sit Phil Mickelson for the third time.

Phil Mickelson won’t make an appearance during Saturday foursomes, making this the second straight Ryder Cup in Europe in which Mickelson has sat an entire day. His lone appearance in a team match this week at Le Golf National will be the 5-and-4 drubbing he took alongside Bryson DeChambeau in Friday’s foursomes play.

Instead DeChambeau will draw Tiger Woods as his new partner, while European skipper Thomas Bjorn has sent out the same four groups for foursomes that went undefeated yesterday. Here’s a look at the final team matches of the week (all times ET):

Furyk has swapped out Rickie Fowler for Koepka, as world No. 1 Johnson will go all five sessions. After both lost their fourball matches this morning, they’ll be tasked with taking down the experienced duo of Rose and Stenson who cruised to an easy foursomes point on Friday.

Watson and Simpson remain a foursomes duo despite an underwhelming performance on the opening day. They’ll take on Garcia and Noren, with the Spaniard coming off an emotional win in the morning with Rory McIlroy that sparked another strong session for the Europeans.

Woods is heading back out again, but he still can’t shake the duo of Molinari and Fleetwood who beat him and Patrick Reed in both of the morning sessions. Now he’ll pair with frequent practice partner DeChambeau, while Molinari and Fleetwood look to add their names to the Ryder Cup record books by going a clean 4-0 as a team.

Spieth and Thomas are the only American duo to play all four matches together, and they’ll square off with Poulter for the second straight session after earning the lone American point of the morning wave. While the Englishman paired with Jon Rahm in that match, he’ll re-join McIlroy after their foursomes win Friday as the Euros look to close out the team matches with one of their most fiery combinations. 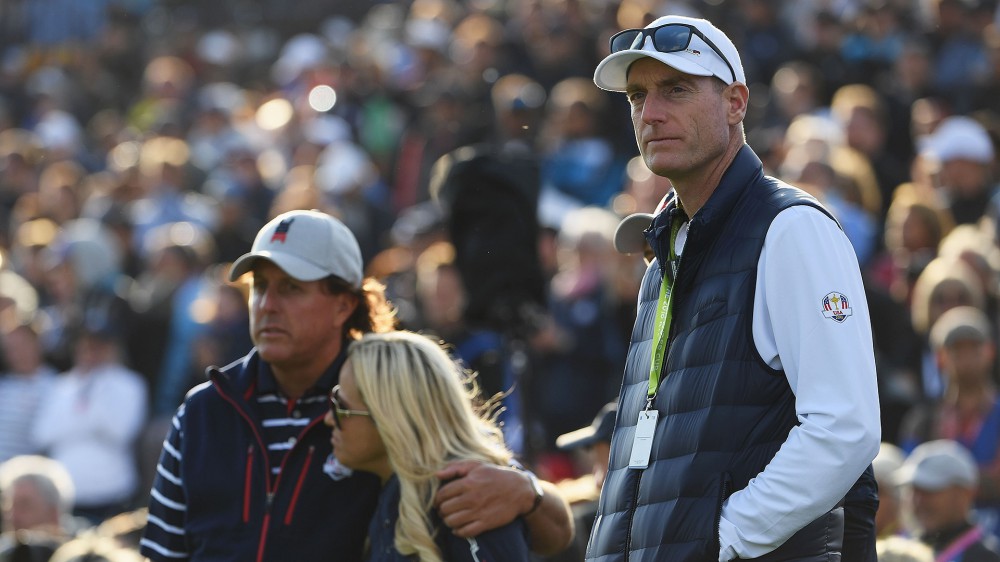