Count the LPGA’s Lizette Salas among those who adore her.

“You just inspire me so much,” Salas told Bockerstette when they met at the Bank of Hope Founders Cup this week.

Amy’s a star now. That’s what so many people who saw her viral video tell her. The world is on a first-name basis with her now, since the Special Olympics golfer won the hearts of so many making par on the Waste Management Phoenix Open’s iconic 16th hole during a practice round earlier this year. Amy Bockerstette, a 20-year-old golfer with Down syndrome, got to play the iconic 16th hole at the Waste Management Phoenix Open and made par with Gary Woodland watching.

“People are still coming up to her, strangers, some with tears in their eyes, telling her how much they enjoyed that video, and how much it inspired them,” Jenny Bockerstette, Amy’s mother, said with Amy mingling among pros on the driving range at the Founders Cup. “It’s kind of overwhelming, to be approached by people you don’t know, but Amy loves it.”

Amy nods in agreement hearing this.

The Founders Cup’s first round fell on World Down Syndrome day. Amy was born with the genetic disorder, and she’s active in helping the cause, and now so many others causes, thanks to her growing popularity.

On Wednesday, Amy was a special guest for the LPGA’s launch of its new Drive On brand campaign. On Saturday, she will take part in the LPGA-USGA Girls’ Golf clinic. She’ll also be involved in the Founders Cup Hall of Fame Skills Challenge.

“It’s made our lives crazier,” Jenny said. “We were already busy with Amy being a student-athlete, with everything that goes with that, classes, lessons, practices and tournaments.”

Amy, 20, was the first athlete with Down Syndrome to earn a full athletic scholarship. She plays on the Paradise Valley Community College golf team in Phoenix.

Since her viral video, she’s been in high demand.

“We’ve become sort of her managers,” Jenny said of an expanding parental role, “because so many people have reached out from different groups, asking her to be part of their fundraising events, or to say a few words to help their cause. It’s mostly disability groups. “We’re thrilled to be able to give back, and it’s fun for Amy. She likes making new friends.”

Amy, pictured above with LPGA pro Mariajo Uribe, made a statement at the Phoenix Open that captured the spirit that poured through her viral video. She uttered three words that stay with so many people who see it.

“I got this,” she kept repeating as self-talk when she entered the greenside bunker before getting up and down for her par.

Woodland reached out to Amy recently, to check up on how she’s doing.

“We can all use more Amys in our lives,” Woodland said at the Honda Classic earlier this month. “She makes the world a better place.”

Amy heard about that.

One of a growing legion. 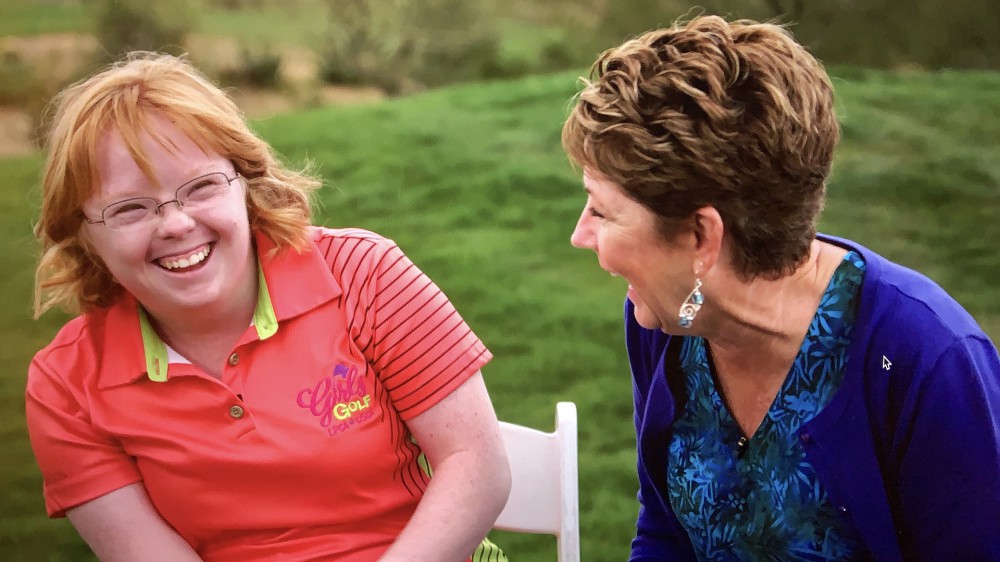 Watch: Holmes 3-putts from inside of 4 feet; JT follows with 4-putt

Justin Thomas on brutal Winged Foot: ‘I absolutely loved it’