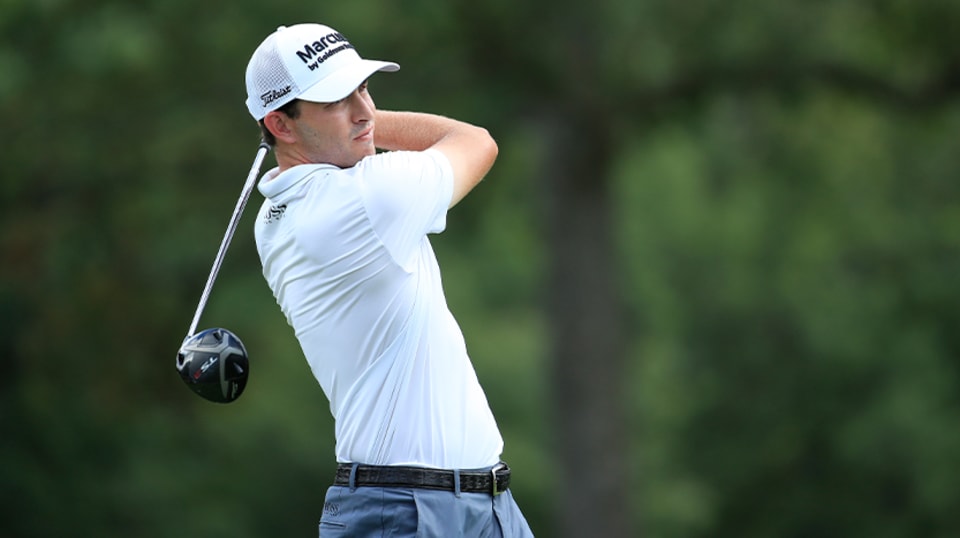 OLYMPIA FIELDS, Ill. – Adam Scott can’t believe he has a shot at the TOUR Championship the way he’s been hitting the ball off the tee at the BMW Championship.

But the 14-time PGA TOUR winner is glad he does and intends to make the most of it over the weekend. Entering the week at 38th in the standings Scott needs a high finish to make it to FedExCup finale for the ninth time.

Scott has hit just 10 of 28 fairways in his opening two rounds yet scores of 72-69 have the Australian at one over, just two off the lead and tied fifth. With Olympia Fields playing brutally tough, Scott is defying the odds with such little accuracy and currently projects to sneak into East Lake at 29th.

“I’m not hitting it very good at all. Fortunately I’m putting well, and that’s keeping my score respectable. I’m missing so many fairways, which makes it hard, and around here, you’re going to pay the price eventually, and that’s why both the first two rounds I’ve struggled to get it in the clubhouse,” Scott said after dropping three shots in his last five holes on Thursday and two on his last five on Friday.

“It’s challenging because I’m just trying to kind of clear my head to hit a shot off the tee, and it’s hard when you hit one left and then you hit the next one right and you’re trying not to think about it too much.

“I don’t think it’s far away, but I just haven’t found the rhythm out there at all, and I struggled with that over the weekend in Boston a bit and again here. But I’m grinding. I want to play next week.”

Joining him as a projected player to make a move from outside the top 30 to inside the mark is co-leader Patrick Cantlay. Cantlay’s 2-under 68 on Friday followed an opening 71 and was full of highlights including two hole outs from off the green, one for an eagle, and a long range birdie to close his round.

The two-time winner opened the week in 37th spot on the points list but currently projects to fourth.

“The chip-ins obviously helped a bunch, and you don’t do that every day, so I need to hit it a little better on the weekend,” Cantlay said. “But for a scrambling day, it was excellent.”

Woods needs miracle weekend… Tiger Woods sits eight shots back of the projected finish he needs to continue his season past the BMW Championship. For the second straight day Woods struggled and despite a birdie on his penultimate hole and a long range par putt dropping on the 18th the 82-time TOUR winner had to settle for a 5-over 75.

He now sits eight over for the tournament, nine shots adrift of the lead and projecting 63rd in the FedExCup, well outside the top 30 who make it to the TOUR Championship next week.

Mack attack… MacKenzie Hughes joins Scott and Cantlay as players trending inside the top 30 from outside the mark, as does Presidents Cup player Joaquin Niemann. Canadian Hughes started the week in 36th spot but sitting T10 through two rounds at the BMW Championship has him sitting right on the bubble, projected 30th and just nine points in front of Cameron Champ.

Having started the week a 25th Champ has a serious grind ahead of him this weekend, now sitting T63 at Olympia Fields and knowing every position he can grind back could be the difference in continuing his season.

Niemann sits T13 through two rounds sliding from 31st to 28th in the projected standings. That’s currently bad news for his International Presidents Cup teammate Cameron Smith who looks set to move from 26th to 32nd. Adam Long (27th to 33rd) and Kevin Streelman (28th to 34th) are also in danger of finishing up early if they can’t improve over the weekend.

Hermanator… A few weeks ago prior to the Wyndham Championship Jim Herman was 192nd in the FedExCup. He famously went on to win at Sedgefield and entered the BMW Championship in 63rd position, a long shot to continue his season.

But for a fleeting moment in Friday Herman projected into Atlanta before three bogeys in his last four holes had him settle for a 2-over 72 and into a tie for 13th at three over.

While the poor finish now has him projected 53rd and out of the Playoffs Herman knows he’s just three shots off the pace of producing the ultimate underdog run.