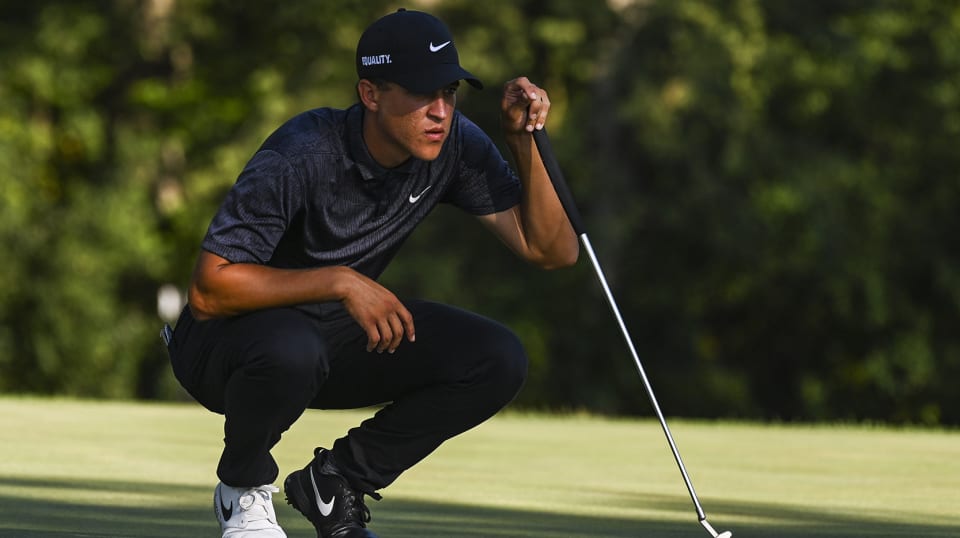 OLYMPIA FIELDS, Ill. – Cameron Champ didn’t play his best golf but he
still left Chicago with his head held high after making his own
personal stance on social injustice and securing a place in his first
TOUR Championship.

Champ had
considered sitting out the BMW Championship after players in the NBA,
MLB, WNBA, MLS and WTA had stood down from competition following more
social unrest in the U.S. earlier this week in nearby Wisconsin.

But he would ultimately decide to play on as he is part of a small minority of African Americans on the PGA TOUR and felt he could make more impact by speaking out and creating further awareness with his presence.

Champ wore a combination of black and white clothing during the week and had one black and one white shoe on also. They carried messages of support for the Black Lives Matter movement, Breonna Taylor, Jacob Blake and his late grandfather Mack. He also wore an “Equality” hat during play.

“I just want to show my love and support. I definitely thought about (not playing) for sure, but obviously I feel like I can do a lot more playing, and again, showing my support and expressing myself,” Champ said after his opening round.

Starting at 25th in the FedExCup, Champ knew he could secure a place at East Lake with just a half decent week at Olympia Fields, but after sitting even par through his first 11 holes on Thursday, the two-time TOUR winner dropped seven shots in as many holes coming in.

He would ultimately shoot rounds of 77-74-70-74 to finish 15 over and in a tie for 65th. When he completed his final round on Sunday, Champ was projected to miss the TOUR Championship by one spot, but as he made his way home other competitors stumbled and pulled him back in. He will go to East Lake as the 29th seed of the 30 players.

“I didn’t play well this week, but I think a lot of good came out of it for me personally and for my team and just with the TOUR, as well,” Champ said. “Again, it’s (social injustice) a subject that needs to be talked about more but also actually action taken, and again, for me it just feels like I can be a vocal point with that, with my background, and just kind of how I feel about the subject and how it affects me and my family.”

With a place next week secure, Champ knows he will need to bring his best if he is to make up the 10-shot deficit he will start with to FedExCup leader Dustin Johnson.

“It’s a fresh week, a different golf course. It will definitely be exciting,” he said. “It’s been a solid year for me regardless.”

Dustin Johnson would have preferred to win the BMW Championship, but the 22-time PGA TOUR winner was forced to settle for top spot in the FedExCup standings after Jon Rahm produced a stunning long-range birdie on the first playoff hole at Olympia Fields.

Johnson had set up the extra hole after making an incredible 43-foot birdie that snaked up and over a ridge and down to the hole at pace only to see Rahm dunk a 66-foot birdie of his own as the two went head-to-head.

Trying to extend the contest Johnson’s effort from just under 33 feet came within inches of the cup, thwarting his chance to win back-to-back starts after his THE NORTHERN TRUST triumph.

“I played an unbelievable putt, got in the playoff and then Jon made an even more ridiculous putt on top of me,” Johnson said. “And then I gave it a good effort (in the playoff). I thought I made it when it was coming down the hill. It just kind of ran out of a little bit of speed and missed just low.”

The runner-up effort was enough to ensure Johnson enters the TOUR Championship as the top seed and as such he will start Friday’s opening round at 10 under. His lead will vary from two shots (over Rahm) to as many as 10 over his rivals before a ball is hit.

“Obviously the goal was to be No. 1 going into East Lake, and I am still No. 1. I like my position,” he added. “I feel like the game is in really good form right now. I’m really, really pleased with all aspects of the game. I’m really looking forward to next week and a chance to win the FedExCup.”

Mackenzie Hughes had lost his shot at winning the BMW Championship a few holes earlier but when the Canadian stood over a 5-foot par putt on the final hole at Olympia Fields he knew it was of serious consequence.

If Hughes made the putt he would move on to next week’s TOUR Championship for the first time in his career. If he missed it he would see his season end right then and there and Adam Long would instead head to Atlanta.

Hughes calmly slotted it home and raised both hands in the air in triumph.

“That was some of the most pressure I’ve felt in a long time,” he said afterwards. “I’ve contended to win some tournaments this summer, and that kind of felt like the same kind of intensity on that putt.”

Making the feat all the more impressive was the fact Hughes had woken Sunday with a bad neck, leaving him in some pain and discomfort throughout his round.

“Didn’t have my good stuff at all, and somehow found a way to grind it out. I made it pretty hard there down the stretch, but just really thankful and relieved to get it done,” he said. “I was really proud of myself. I think I’ll look back on this one in a while and reflect on it and really draw a lot of positives from it.”

And now he says he heads to Atlanta full of confidence.

“It’s kind of a freeing feeling. I’m obviously not expected to go do anything at the TOUR Championship, but I’m 10 back, and you never know what could happen,” he said. “I know you can’t win if you’re not there, so step one accomplished, and I’m excited for the week.”

Joining Mackenzie Hughes as the only other player to play their way from outside the top 30 to inside the mark was Chile’s Joaquin Niemann. The International Presidents Cup star held the lead in the tournament with five holes to play but a costly bogey on the 14th and a short missed birdie chance on the 15th meant he would be forced to settle for a tie for third.

Starting the week at 31st in the FedExCup, Niemann was clearly close enough to make his move, but his incredible week shot him all the way to 18th in the standings. He is one of eight International eligible players (non U.S. or Europe) to make it to East Lake, the most since eight made it in 2011. The all-time high is 11 players in 2008.

“It’s awesome to get one of those weeks that you play good. I haven’t been playing great the last couple weeks, so this gave me a lot of confidence what is coming next for East Lake. I just feel great. I’m happy to be in this situation right now,” he said.

The 30 players, and where they will start on the leaderboard for the TOUR Championship, are now set. Bonus strokes are assessed via seeding with the leader after 72 holes at East Lake claiming the FedExCup.

The last man in was 2014 FedExCup champion Billy Horschel, just three points ahead of Adam Long. He was forced to play the waiting game Sunday.

“If I somehow make East Lake, I love what I can do there,” he said before confirmation. “I know I’m going to start 10 shots back and that’s a big margin to make up, but the game is trending in the right direction… and my record shows that I do love it a lot with a win, a second and a seventh-place finish at East Lake before.”

End of the road for Tiger Woods

Tiger Woods was among some of the high profile players who ended their seasons at Olympia Fields. Needing a top-three finish Woods never got going and ended well off the pace in a tie for 51st. Read about his season here.

Others to miss East Lake after looking likely to make it included Patrick Cantlay and Adam Scott, who along with Woods, Tyler Duncan, Nick Taylor, Richy Werenski, Michael Thompson, Andrew Landry and Jim Herman were winners in season 2019-20 who did not make the season finale.