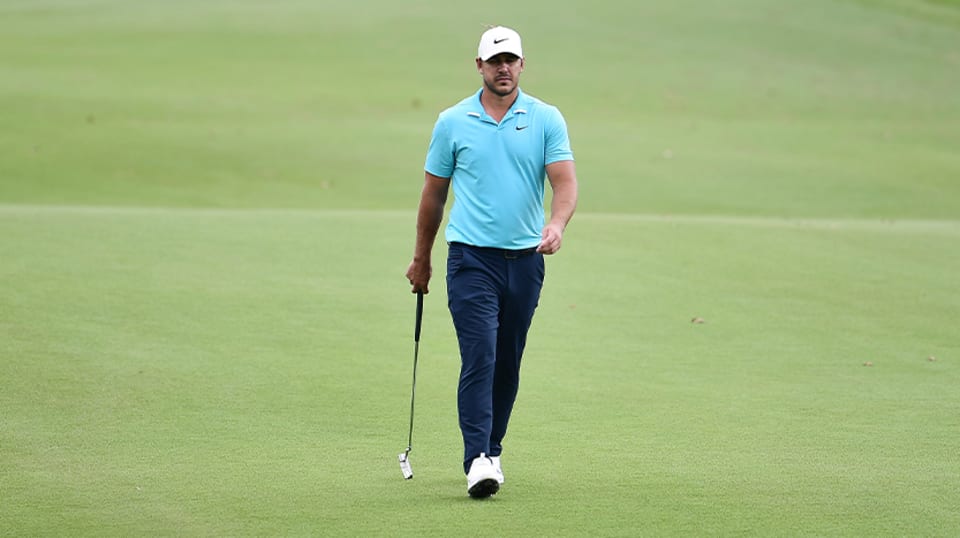 A breezy day on one of the PGA TOUR’s most penal courses isn’t the ideal setting for a struggling player, but it brought out the best in two of the game’s biggest names.

TPC Southwind was softened by rain, but Thursday’s scoring average still was just a quarter-stroke under par. The Bermuda rough is difficult to judge, an inconsistent breeze rustled the trees and no course on TOUR has had more water balls since 2003.

Brooks Koepka made it look easy in the first round of the World Golf Championships-FedEx St. Jude Invitational, displaying the bravado that brings out his best when conditions are toughest.

Koepka matched his career-low round with a 62 Thursday at TPC Southwind. It gave him a two-shot lead over Rickie Fowler and Brendon Todd.

Todd has already won twice this season after a remarkable comeback from a prolonged slump. Koepka and Fowler, on the other hand, are winless.

“I never felt like I had to work too hard today, which is different than it has been,” Koepka said.

He couldn’t have regained his form at a better time. Not only is he facing a fortnight of title defenses, but he’s 136th in the FedExCup with just three weeks remaining in the regular season.

Koepka has just one top-10 this season and has finished outside the top 60 in his past three starts.

Last week’s missed cut at the 3M Open may have been a blessing in disguise. It allowed him to work with his coaches, Claude Harmon III and Pete Cowen. It was Koepka’s first time seeing Cowen since THE PLAYERS. Koepka also added another coach to his stable. He started working with putting coach Phil Kenyon this week, as well.

Koepka has been struggling with a left-knee injury – he had stem-cell treatment after last year’s TOUR Championship, but re-injured it at the CJ CUP @ NINE BRIDGES – but Cowen recently told the Daily Mail that the knee isn’t the culprit.

“When you get an injury as bad as that you’re never 100% right again,’ said Cowen. ‘But I don’t think it’s a problem. That’s finding excuses for the fact he’s swinging it badly. We don’t need excuses, we need to sort it out.”

Koepka, who thrives on criticism, appreciates the Englishman’s frank talk.

“With Pete, it’s more psychological. He’ll beat me down,” Koepka said. “He’ll jump on me. I enjoy that, when someone tells I can’t do something.”

Fowler also played well Thursday after struggling with his iron play and putting this season.

Fowler is 89th in the FedExCup standings and in danger of missing the BMW Championship for the first time in his 11-year career. He’s never finished worse than 43rd in the FedExCup, but he has more missed cuts (five) than top-10s (two) this season. His results since the Return to Golf have belied that inconsistency, as he sandwiched two top-25s between three missed cuts, including an 81-68 roller-coaster in his last start at the Memorial Tournament presented by Nationwide.

Fowler started working with swing coach John Tillery last fall. He saw quick results, finishing in the top 10 in his first two starts of the calendar year. Those remain his only top-10s of the season. Some more work with Tillery before arriving at TPC Southwind resulted in Fowler’s best round since January.

Fowler ranks 96th in Strokes Gained: Approach this season after finishing in the top 50 in that statistic from 2015-18. But it hasn’t just been his ball-striking.

He was in the top 10 in both Strokes Gained: Approach and Putting on Thursday. He hit 13 greens, didn’t miss a putt inside 10 feet and holed three from outside 15 feet. His only bogey came on his last hole of the day, when he missed the fairway left and decided to lay up short of the green.

“Today was an accumulation of the work last week and just freeing myself up and simplifying thoughts and just playing golf versus working on the range,” Fowler said. “I was able to get a lot of good work with the putter last week and get myself back into some better positions to free up the putter. I was pulling a lot of putts, I was kind of tense with it, so it’s nice to see things kind of pay off.”