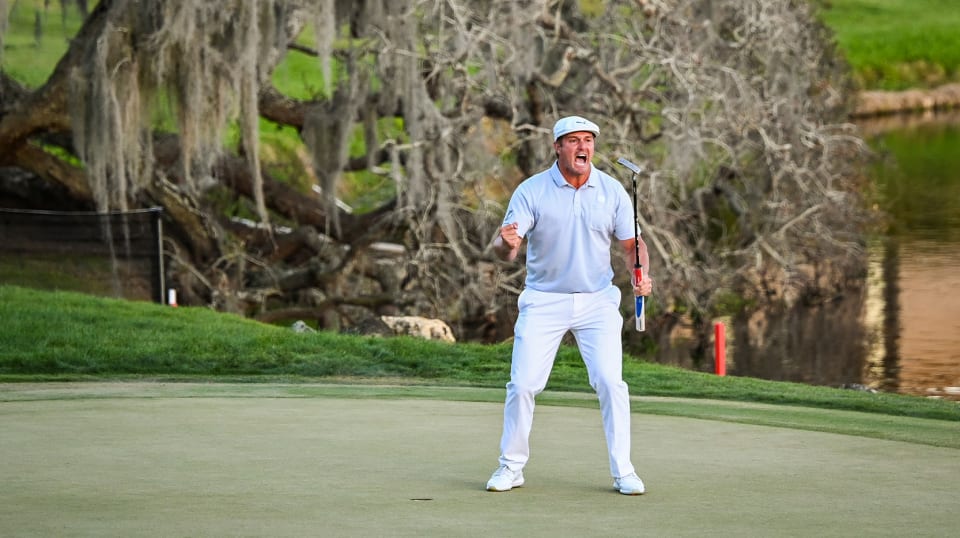 The crowd loved it as Bryson DeChambeau ascended to pole position in the FedExCup with his eighth PGA TOUR victory at the Arnold Palmer Invitational presented by Mastercard.

DeChambeau’s soaring drives at the sixth hole maxed out at 377 yards Sunday and brought howls of delight as he turned the par 5 into a par 4 at most. And after he’d made a testy five-footer to secure a final-round 71, edging Lee Westwood (73) by one, he flexed and screamed.

Not lost amid all the fireworks, though, was that DeChambeau also won in large part due to his work on the greens, namely by making his two longest putts of the week. First came his birdie from just over 37 feet at the fourth hole, which seemed tame by comparison to the nearly 50-foot bomb he would make to save par at the 11th hole. He joins just four other players to make multiple putts from over 35 feet in the final round en route to victory in the ShotLink era:

After his U.S. Open victory last fall, DeChambeau – the first American winner at Bay Hill since Matt Every in 2015 – becomes the first multiple winner of the 2020-21 TOUR season.

Here are five other stories you may have missed:

1. DeChambeau remembers those who paved the way.

The champion had some legends in his corner on Sunday.

For one, he always has revered the tournament’s namesake, who was kind enough to extend an invitation to DeChambeau to compete at Bay Hill when DeChambeau was still an amateur. As the 2015 U.S. Amateur champion (Palmer was a U.S. Amateur champion 61 years earlier), DeChambeau played the Arnold Palmer Invitational and tied for 27th, his week highlighted by a closing 66. For a young kid dreaming of one day playing the TOUR, it was a significant week.

If the first player who comes to mind at Bay Hill is Palmer, then the second would be Tiger Woods, an eight-time winner there. Sunday before his round, DeChambeau received a text from Woods, who was injured in a single-car accident in Los Angeles on Feb. 23.

“Well, it was obviously personal, I would say, for the most part, but pretty much to sum it up … he texted me this morning out of the blue and I wasn’t expecting anything,” DeChambeau said. “When I got that text, I’m like, ‘Wow, that’s pretty amazing that he is thinking of me when he’s in his tough times that he’s going through right now.’ So I just texted him. I said, ‘Keep moving forward, keep going forward. You’re going to get through it. You’re the hardest working person I’ve ever met and you’ll persevere through this pretty much.’

“One of the things that we talked about was, it’s not about how many times you get kicked to the curb or knocked down. It’s about how many times you can get back up and keep moving forward. And I think this (champion’s) red cardigan is not only for Mr. Palmer, but I would say it’s a little bit for Tiger as well, knowing what place he’s in right now.”

Although he didn’t win, ultimately collecting his seventh runner-up finish on TOUR, Lee Westwood made hard-working pars on 17 and 18 to at least make DeChambeau earn it. That included Westwood’s gritty 4 from a divot in the middle of the fairway at the last.

The only hiccup: His failure to birdie the short, par-5 16th hole after splitting the fairway.

“Yeah, I mean I’m not short myself,” Westwood said. “I think I hit it about 350 yards down 16. I only went in with wedge into that par-5.” Yet with DeChambeau up against the lip of a fairway bunker, Westwood missed the green and couldn’t get up and down, walking off with a par.

Still, the veteran from England wasn’t hanging his head at the end of a very, very hard day.

“You can’t want for more than that,” he said. “I thought we had a really good battle, we were never, it was never really more than one in it all day and there were tough conditions out there and it wasn’t going to be a day where – I don’t think anybody was going to shoot 68 or 67.

“It was a day for playing sensible and hanging on and grinding out the pars.”

Although he didn’t make anything on the greens Sunday, Jordan Spieth (75, T4, five back) had a great first start at the Arnold Palmer Invitational. It started with a tour of Palmer’s office and ended with his third top-five finish in his last four starts. This one, Spieth said, was his best effort yet in his comeback (T3/AT&T Pebble Beach Pro-Am; T4/Waste Management Phoenix Open).

“I thought I played better today than I did any of those Sundays,” said Spieth, whose streak of 389 holes without a double bogey or worse marks his longest on TOUR. “At the beginning of the day if you told me I was going to be even through 10 and be in – hit driver in the middle of the fairway on 11 and on 12 – I would have thought I was going to win the golf tournament.”

Spieth has climbed from 92nd to 52nd in the world this year, and his finish at Bay Hill pushed him up to 43rd (from 59th) in the FedExCup standings. The 2015 FedExCup champion continues to inch ever closer to the form that saw him reach No. 1 in the world.

“Again, I put the ball exactly where I wanted to on just about every single shot and putt,” he said, “and it came out to 75 somehow. But that’s not going to happen every time; if I do, if I play the way I did today. It’s going to be really good going forward.”

Rory McIlroy, who will be defending his 2019 title at THE PLAYERS Championship this week, went into the final round just four back but struggled with a 4-over 76 (T10). Although he was one of many who struggled, he had trouble accepting the lackluster final result.

One thing he did feel optimistic about: The return of on-site fans.

“I’ve missed this a lot,” he said. “Even though it’s only, whatever, 25 percent capacity this week, it feels so much more than that and it’s great to play in front of that. I’m looking forward to doing it again next week. I think that it is, I think we’re all sort of now seeing a light at the end of the tunnel where things can at least get back to some sort of normality pretty soon.

“I can’t believe it’s been a year,” he continued. “It’s going to be surreal looking back in 20 years’ time and sort of seeing what we lived through.”

The good news for Canada’s Corey Conners was that he eagled the par-5 16th hole to get within one of the lead. The bad news is he bogeyed 17 and 18 to shoot 74 and finish 8 under, three back.

Still, the solo third was his best result of the season.

“Yeah, it was a challenge,” Conners said of a day in which the field averaged 75.486. “Definitely a battle out there. I made some nice saves at the start of the round, just didn’t get the putts to fall today, the greens were rolling really fast, ball seemed to never stop.

“So it was very challenging,” Conners continued. “Gave myself a shot, made a really great eagle on 16 that felt pretty good, and bogeyed the last two holes, wasn’t great. But really challenging golf holes. I’m sure I wasn’t the only one.” (There were no bogey-free rounds.)