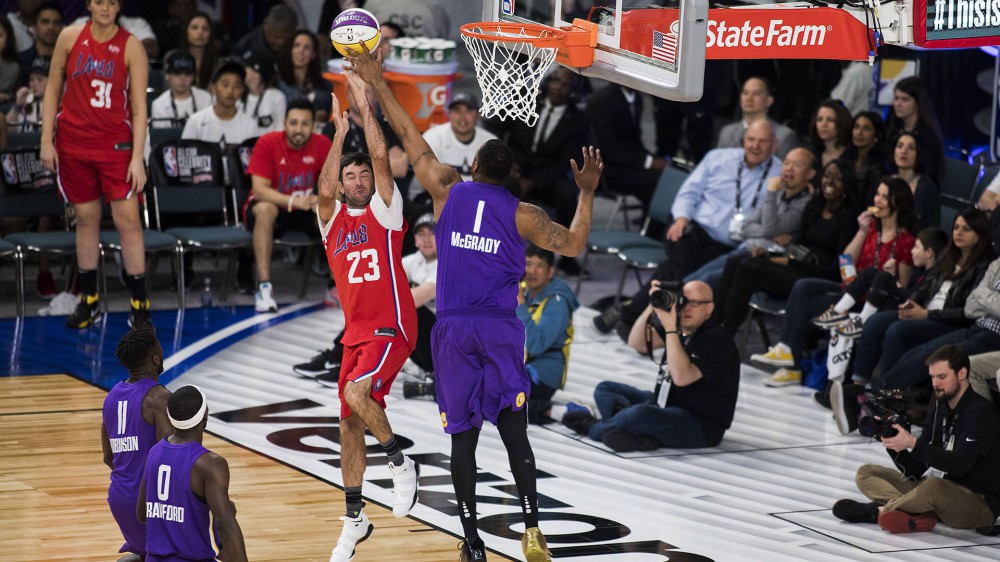 LOS ANGELES – A detour to the NBA Celebrity All-Star Game didn’t keep Bubba Watson from leading this week’s Genesis Open, although an on-court brush with Hall of Famer Tracy McGrady nearly derailed his chances for a third tournament win.

Watson enters the final round at Riviera with a one-shot lead over Patrick Cantlay after firing a 6-under 65 in the third round. The day before, the southpaw left the course around lunch time and headed across town to participate in the All-Star festivities, where during the celebrity game he tried to score 1-on-1 over McGrady.

Watson’s move into the lane went about as well as you’d expect given their five-inch height disparity, with McGrady easily blocking the ball into the stands. According to Watson, he had only one thought as McGrady came barreling towards him across the lane.

“When I saw him, all I saw was, ‘This is my moment to get hurt,’” Watson said. “This big tank is about to hit me, and I was like, ‘Just knock it into the stands. Just don’t touch me.’ So it worked out, he didn’t touch me so it was good.”

Watson’s attempt went against his wife Angie’s advice to avoid the paint area, but it provided a fun moment for a player used to carving up fairways and greens – not to mention the guy who played 15 seasons in the NBA.

“Well, he’s got like just under 800 blocks for his career, so I gave him one more, you know?” Watson said. “It was just, it was a blast. I wanted to see how good he was, see if he could miss it. He hasn’t played in a while.”

Watson took some heat on Twitter from his PGA Tour peers for the rejection, but few were still laughing as he rocketed up the leaderboard Saturday with five birdies and an eagle. Now he has a chance to win this event for the third time since 2014 – even if he doesn’t plan to go toe-to-toe with McGrady again anytime soon.

“Some guys wanted to try to win MVP, so I was trying to pass it and let them have their fun and their moment,” Watson said. “I was just trying not to get hurt.”