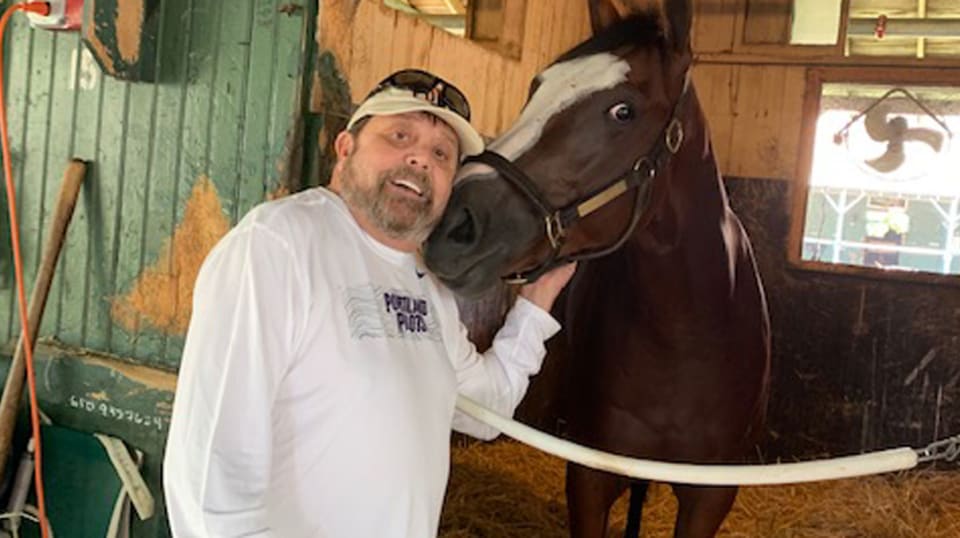 Greg Martin wasn’t sure quite what to think.

The veteran PGA TOUR caddie had just come home from working at the 2007 AT&T Pebble Beach Pro-Am when his wife gave him some unexpected news.

“But it ended up to be quite a birdie.”

Indeed. Over the past decade or so, the couple has owned shares in more than 25 thoroughbreds, including Commanding Curve, which finished second at the 2014 Kentucky Derby.

None, however, is as talented as Tiz the Law, which won the Belmont Stakes in June and finished second at the Kentucky Derby. With the coveted Triple Crown out of the picture, trainer Barclay Tagg opted to hold the horse out of the Preakness in favor of the Longines Breeders’ Cup Classic on Nov. 7.

The Breeders Cup is to thoroughbred racing what the TOUR Championship is to golf. The two-day event at Keeneland in Lexington, Kentucky, marks the culmination of the season worldwide and the $6 million Longines Breeders’ Cup Classic, which is limited to 14 horses, is the finale.

And Tiz the Law is on the short list of the favorites to win that race, along with the three-year-old horse of the year honors.

Consider this. Kathleen paid $10,000 for her share of Tiz the Law, which the syndicate Sackatoga Stable bought for $110,000. The owners of the horse that wins the Breeders’ Cup, which is contested over a mile-and-a-quarter, will share in $3.3 million based on the percentage of their investment.

Kathleen is one of 35 owners of Tiz the Law, which already won $2.6 million at the Belmont Stakes. It’s an eclectic bunch that includes CEOs and businessmen, as well as an accountant, a retired urologist, construction supervisor, ER doctor, former IT professional, ex-college basketball coach, a retired judge and a woman who rescues farm animals, to name a few.

Kathleen, who worked in human resources at General Electric for more than 33 years, grew up about 40 minutes from the racing hotbed of Saratoga Springs, New York. She was nearing retirement and the couple was living outside Rochester, New York, when she saw an ad in the newspaper that sparked her interest.

The headline read: Do you want to learn about the horse racing business?

“So, I thought about it and I said, sure, why not?” Kathleen recalls. “Greg wasn’t home. He was caddying out on the road. I said, yeah, I think I’ll do it. So, I placed the phone call and the rest is history.”

The first two horses Kathleen bought into had enough success that the couple decided to get more involved. They currently own shares of six horses but “Tiz the Law is by far the best horse we’ve ever owned,” Greg quickly points out.

Tiz the Law has only lost one other race besides the Kentucky Derby in his career. In addition to the Belmont Stakes, the thoroughbred has racked up wins at this year’s Florida Derby, Holy Bull Stakes and Travers Stakes in August.

Due to the COVID-19 crisis the racing calendar was changed with the Belmont Stakes run first instead of the Kentucky Derby. Trainers and jockeys were the only people allowed so Greg and Kathleen watched at home in Dunedin, Florida, along with Linn Strickler, who caddied for Ben Crenshaw, Curtis Strange and Payne Stewart, among others.

“It was just a real, real thrill to watch it,” Greg says. “We’d been to every other race, but this darn virus. It’s the same thing in golf.”

Greg and Kathleen, who met at a tournament in Boston and got married during the Las Vegas Invitational, were able to attend the Kentucky Derby, though. They rode in yellow school buses, just like the syndicate arrived in the last time it had a horse in the Derby – 17 years ago.

“We were fortunate enough to be able to be on the bus, the school buses and take it all in,” Greg says. “We just had a real good time. As I tell people, I’ve had two days in my life, that were the happiest days of my life and the saddest day.

“And the happiest day of my life was 2014 when we were last horse to get into the Kentucky Derby with Commander Curve and we finished second. But my saddest day of horseracing was again when we came in second in the Kentucky Derby (this year) as the favorite (and lost).”

Interestingly, both Commander Curve and Tiz the Law were the No. 17 horse – and in the 146-year history of the Kentucky Derby, the horse in that post position has never won.

Greg, who started caddying in 1982 for Joe Inman, spent the bulk of his career with Dan Forsman, winning four times in the PGA TOUR and twice on PGA TOUR Champions. He also was on Mark Calcavecchia’s bag for two victories.

Nicknamed Piddler by the late Bruce Edwards, Tom Watson’s long-time looper, for his, shall we say, somewhat deliberate approach, Greg says he was amazed by the former players and caddies who reached out after Tiz the Law won the Belmont States.

“You couldn’t believe on both at the PGA TOUR and especially the Champions Tour, the calls of support and emails from the Billy Andrades to Neil Lancasters to Tiger Woods’ caddy (Joe LaCava), the love and everything that came in, which is so supportive,” Greg says.

“And the TOUR was just wonderful about all this. It was really fun to represent. I always said, I’ve been interviewed many times, this is the caddie’s horse — of course, it’s the caddie’s horse.  There are not a lot of people could say they’ve had a horse in the Kentucky Derby — let alone had two. …

“And with everything that’s going on in the world this is just a drop in the bucket. … But it’s a real thrill, you know what I mean? We’re real humble. Let’s put it that way.”