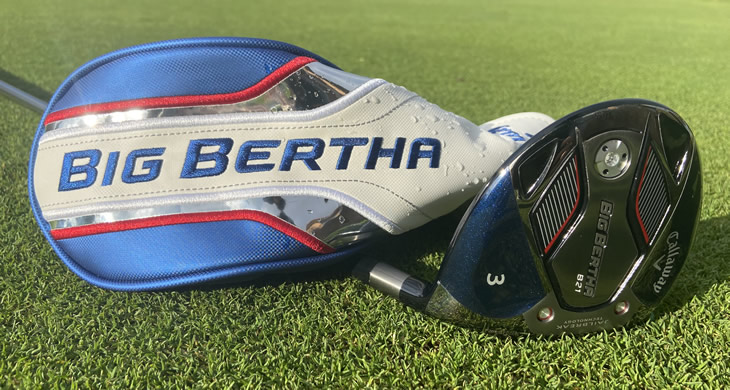 Callaway Big Bertha B21 Fairway Wood Review – When I hear the name ‘Big Bertha’ I automatically think of big, chunky, easy to hit clubs designed to help high handicappers or beginners gain some more consistency in their golf game and hopefully increase their enjoyment levels out on the course. 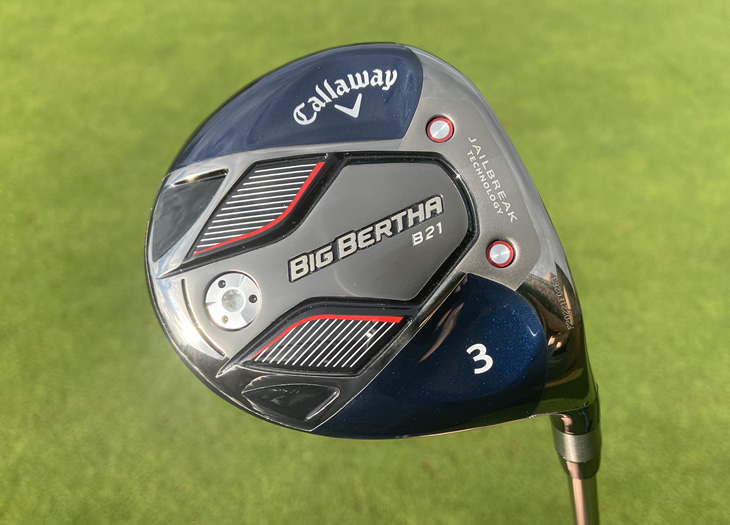 The new Big Bertha B21 range, released earlier this summer, is seeking to continue on that theme but rather than just being the afterthought to their main range, Callaway have chosen to introduce plenty of the main technologies you’d see in the Mavrik line into the Big Bertha’s too.

Fairway woods are a bit like marmite in the golfing world. Some people love them, and much prefer them to their driver, and some people hate them as they can be hard to hit off the deck. Amongst many amateur golfers, even a lot of better players, launching a 3 wood without a tee can be a very tough task.

However, if you fall into the latter category then you may want to carry on reading, as Callaway claim that the B21 is their easiest fairway to launch ever.

You get the classic oversized Big Bertha shape which looks friendly and forgiving, and Callaway has increased the offset in order to reduce any fade spin and try to promote more of a draw which will hopefully enhance distance.

The shallower face design and progressive lengths depending on loft make this play a little more like a hybrid, which should aid those golfers who lack a bit of confidence hitting off the deck and provide better turf interaction too.

Of course it wouldn’t be a Callaway golf club without talk of ball speed, and so they have added an AI designed Flash Face as seen in Mavrik and Epic Flash wood models, to give you a little boost in distance across a larger area of the face. The Jailbreak bars also add more stability to the face and promote even more speed.

If you look back over Golfalot’s reviews of Callaway fairway woods from over the many years we have been testing them, you’ll see that they have consistently produced great looking and great performing clubs.

One thing which I think Callaway are particularly good at is evoking memories of previous club with their new releases, which will tug on the heartstrings of golfers as they fondly remember the gear that they have used over the years, such as bringing back the Steelhead and Warbird names in recent years.

The new B21 Fairway seems to continue this theme as it looked to me to be a smarter and more premium-looking version of the old XR Speed thanks to the silver, blue and red colourway.

I think this looks great, and I have always been a fan of some ‘visible tech’ on golf clubs as it reassures you that the brand has not just invented some new features as a marketing tool, it’s there in plain sight.

Seeing the Jailbreak technology and added weight at the back of the club head serves as a reminder of the development that has gone into the fairway to help you improve.

Down by the ball, the B21 has a nice shallow profile and flatter head shape which gave it a good footprint and will no doubt inspire confidence for those golfers who struggle with hitting their woods off the deck.

The club is clearly heavily offset which may be a little unsettling for some golfers who tend to lose the ball left rather than right with their bad shots, but if you’re fighting the slice then you should immediately see that the face will square up a little more at impact to help calm this down.

Callaway’s new RCH shaft was lightweight, as you’d expect, and so this adds to the easy launch characteristics as well as helping to promote a little more distance for those golfers with slightly slower swing speeds.

Off the face the B21 does produce more of a ‘ting’ noise than I would perhaps usually prefer, although I’d say it does help with giving you instant feedback on the strike as well as a bit of a confidence boost for golfers who don’t tend to strike it very consistently. When you hit the ball half decent with this club, you hear it.

Out on the course, the first thing that I noticed was just how easy the B21 was to launch and hit, particularly off the tee. Callaway had made some big claims about this and I think the lightweight shaft combined with the added weight at the back of the club head really help to get the ball up and going.

One of my weak shots with a fairway wood is one which spins up and tends to ‘balloon’ a little where I end up losing 10-15 yards of distance, which can mean missing a green short or having a longer iron into the green if used off the tee. From my testing the ball flight was a little stronger than I expected it to be which is a nice bonus, although the right to left spin is a stronger ball flight for me and probably helped this too.

The B21 sits nice and flat and there’s a shallow face which makes this pretty easy to hit from the fairway too, and I quite liked the way that the club interacted with the turf as it felt like it may be able to help you out if you don’t quite catch it.

There is a definite draw bias as you’d imagine given the amount of offset on this club, and I have to admit that I wasn’t a fan of the look down by the ball for this reason – although the club isn’t really aimed at me so that’s not a surprise.

I did spend some time on the range trying to see whether I could work the ball both ways and I was impressed that it was still relatively versatile considering the offset.

The launch and height was a little one-dimensional although, again, the B21 range is aimed at higher handicappers seeking more consistency so that isn’t necessarily a bad thing.

The B21 slotted in nicely at just under 220 yards carry on average which is pretty similar to the performance I achieve with my current TaylorMade M2 fairway wood, indicating that you’re not having to give up too much distance to gain the extra forgiveness.

The easy launch should also help some golfers gain a few more yards in the air too and my average peak height of 36.5 yards was healthy without being alarming, which was good.

The results also show a clear shape from right to left which meant I was missing my target to the left pretty consistently, although that is exactly what this club is designed to do and so if you do struggle with leaving shots out to the right (as a right hander) then you should receive some help here.

There was also evidence of the Jailbreak technology doing it’s job too as I caught one shot right at the top of the club face, producing just 2700 rpm spin, yet the carry distance remained unaffected compared to the rest of my shots whilst the peak height was pretty similar too.

This proves that you’re getting a bit more value for shots right across the face even if the ball speed did drop by about 7 mph.

Callaway say that the B21 Fairway is one of their easiest to launch and hit and I have to say that I was impressed with the overall forgiveness levels, coupled with the fact that it was able to keep up with my own existing fairway wood.

The only issue I have with the club is that I think there’s quite a limited number of golfers who actually ‘need’ to go for this model over the likes of the Mavrik or Mavrik Max.

Yes, the setup is ideal if you struggle with a slice but if you’re just looking for some overall help because you aren’t great with your woods then I think the Mavrik Max is more than good enough, it’s actually £10 cheaper than the B21 and it’s part of Callaway’s top line of products you can be confident that it has all of Callaway’s best research and technologies packed into it.

As always this is why you need to go and test for yourself to decide which product is best for you, but you can head down to your local pro shop safe in the knowledge that no matter what your swing and golf game is like, Callaway are going to have a product that’s got you covered. Big Bertha, it’s good to have you back.