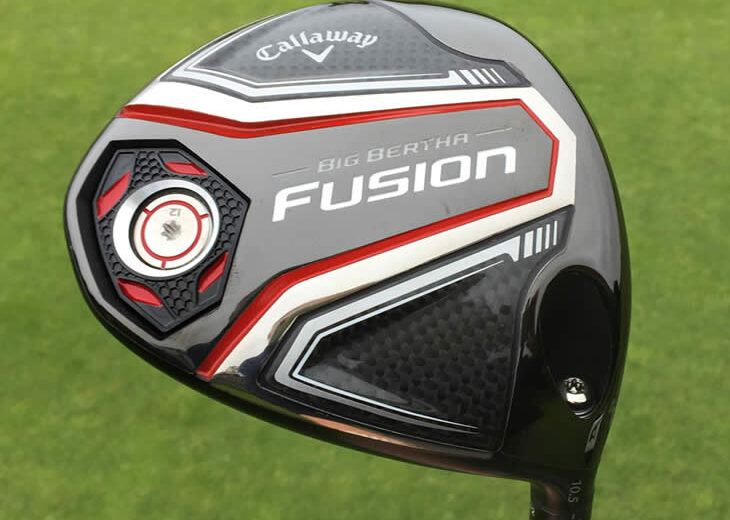 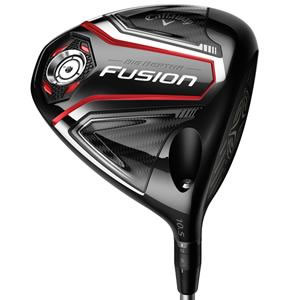 In order to make a driver ‘super-forgiving’ you need to increase the MOI and that means getting the weight low and back. However an all metal head keeps a lot of weight high up in the crown so reducing that is a key aim.

Since 2004, Callaway’s Fusion models have built on their extensive knowledge of carbon and composite drivers to achieve this by replacing the heavy bits in the driver head by lighter bits.

In the Big Bertha Fusion they have taken this a step further by using a titanium ‘Exo-Cage’ for the body and then adding an ultra light Triaxial Carbon crown and sole to enable them to save weight and move it elsewhere.

The Triaxial Carbon is 35% lighter than titanium and 15% thinner than even their Forged Composite material that Callaway used most recently on the Great Big Bertha driver.

All this saves around 35g of weight that can then be redistributed through the medallion, internal weight pads and rear screw to increase the MOI by 17% over the Callaway XR 16 Driver.

Now I said you needed to keep the weight low and back and that is reflected in the shape of the 460cc Big Bertha Fusion driver at address, which can only be described as triangular.

This may be unconventional, but from a forgiveness point of view it is ideal and is not all that new. Visually it is not far removed from the Callaway FT-iZ driver of 2010, which in turn was the successor of the square Callaway FT-i driver.

Square drivers were very high MOI, but the shape meant that it was slower through the air than the more triangular FT-iZ, so you could say that the Big Bertha Fusion is taking the high MOI story forward to the next level.

Speed is key and Callaway has added the Speed Step crown from the XR 16 to the Fusion to smooth the airflow over the top of the head and maximise the club head speed.

The back of the crown has some nice styling where you can see the woven structure of the Triaxial Carbon and I think it looks pretty cool and overall, given the shape, Callaway has done very well at making it look as good as it can be.

If you have used a composite driver before then you will be familiar with the lovely solid low pitched sound that you get from the carbon of the Big Bertha Fusion at impact.

I compared the Fusion to the XR 16 on Skytrak using the adjustable Optifit hosel to fit the same shaft to both in order to see the differences in the heads.

As you can see, for me the Big Bertha Fusion launched it fractionally lower, but it flew higher with around 250rpm more spin and that is consistent with what Callaway were expecting.

The carry distance from both clubs was the same with the lower flight and lower spin of the XR running out a couple more yards. The extra spin is what will help with the forgiveness so if you are in the market for one, it will just be a case of trying them both and seeing which one gives you the best results.

You will also have a choice of shafts, but as standard the Big Bertha Fusion comes with the very light 45g-55g UST Recoil or 63g Diamana Red in 45.5 or 44.5 inch lengths.

The latter is 0.5 inch shorter than the standard for drivers so this will help when it comes to increasing the forgiveness. I have always felt that anything over 45 inches is too long for most golfers and there are plenty of studies to show that a shorter driver shaft actually increases distance as you are more likely to hit the centre of the face more often.

The feeling is that the 44.5 inch shaft could be the more popular option and if that is the case, then this could be a turning point for driver shaft lengths in the future. In player testing with the Fusion, Callaway found that 30% of golfers were longer with the shorter shaft.

Super forgiving drivers come in several forms from offset hosels, to heel weighting to high MOI so there are several options out there if you struggle with your tee shots.

The Callaway Big Bertha Fusion may cost a little more than the XR 16, but for that you get cutting edge materials in a distinctive head shape with all the latest aerodynamic technology and if it enables you to hit more fairways then it will be a worthwhile investment.