Callaway Big Bertha REVA Women’s Range Review – Callaway have been one of the biggest players in the women’s equipment market for years, producing dedicated golf club and sets which help to promote faster swing speeds and easier launch.However, one of the criticisms often levelled at women’s golf gear is that it doesn’t feature the same level of technology as the men’s club. 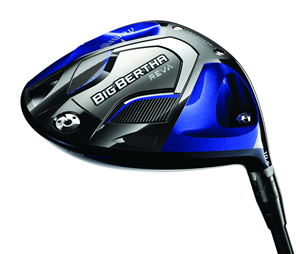 Callaway are seeking to change this with the introduction of the Big Bertha REVA range, developed specifically for women but with all of the same game-improving technologies as the Big Bertha B21 woods and irons that we tested last year.

New to the game or in need of a little bit more advice when it comes to golf equipment? Read our ultimate GUIDE TO BUYING WOMEN’S CLUBS HERE.

What’s The Difference Between The Men’s And Women’s Model?

To be honest, I struggle to make out too much difference between the B21 and the REVA ranges, despite the difference in name and a slight change in colour, with the women’s range doing away with the red splash and the blue colour is a little more of a purple shade.

The women’s range features the same technology as the men’s range but it comes in a more lightweight package with shorter shaft lengths and slightly different loft configurations, built to increase distance, accuracy and be easy to hit.

There is a clear offset look at address which immediately provides you with a feeling that this club is going to draw, something which I’m sure will be a welcome sight to many golfers.

The head appears to be slightly elongated in shape too, further adding to confidence levels and placing a little more of the weight towards the back of the club head to increase MOI and provide easy launch.

I’m a huge fan of that traditional Callaway look in the head, coupled with the Jailbreak technology which should improve the performance on off-centre strikes with a more stable face through impact.

As this is last year’s technology, you don’t get the Jailbreak Speed Frame seen in the new Epic range but the stability of strike was still there regardless.

I really enjoyed using this driver and it did exactly as Callaway said it would – gave me really easy launch with a left-bias in my ball flight. It is available in 10.5 and 12.5 degrees, and lofting up is another really easy way to get your carry distance up rather than having to rely on roll on the fairways.

I tested the Reva fairway wood and the first thing that struck me was that this was the most offset neck I have ever seen! This may not look too inviting for me, but it’s certainly going to help the ball turn over the left, rather than that weak high-right shot that plagues many right-handers.

The face is nice and shallow with a large crown, and this presents a really big surface area on the ground which makes this a really ultra-forgiving club – something which is ideal for those golfers who hate hitting their woods from the deck.

The ball launches into the air nice and easily and favours the left hand side of the golf course, meaning that I actually gained a little extra distance too.

I put these irons down by the ball, and immediately thought, “these are going to hit the ball far”. They’re big in profile, pack a real punch in the strike and are especially good at helping to get you out of the rough which is greater for golfers who don’t naturally generate great speed.

Callaway are brilliant at performance-enhancing irons, and these are just that.

Like the woods, the irons feature plenty of offset to help straighten out those shots which have a tendency to over-fade. The stability they provide through the strike and the ease of hitting off the ground really is amazing.

They are still pretty chunky as you move into a pitching and sand wedge, which may be off-putting for lower handicap players, but conversely may be the ideal confidence boost required for some.

The irons are available from 5-SW with lightweight graphite shafts, although I would always recommend that women consider swapping out a couple of long irons in favour of the more-forgiving hybrids maybe even to the 5 and 6 irons.

Essentially, this range is very similar to the B21 range that I tested last year, only with a slightly different colourway and the ‘Reva’ name added.

This is not necessarily a bad thing, although besides the lighter shaft and smaller grip I wouldn’t say that Callaway have had to do much to ensure that these are specifically designed for women. I’m not sure why Callaway wouldn’t call them ‘Big Bertha Women’ like they have done with the new Epic Speed Driver.

I’m also unsure whether to praise Callaway for avoiding the stereotypical pink/purple colourways, or to criticise them for not changing anything other than the name? The wood heads are slightly different but the headcovers and irons are exactly the same…

Of course, most of this is relatively unimportant as it has nothing to do with the real performance of the clubs. They are packed with technology which really helps your game.

I really enjoyed testing B21 last year, and as these are almost identical I can’t speak highly enough of their ability to help the ball into the air quickly and keep it nice and straight.

They are a really versatile set of clubs which could be suitable for anyone starting golf, a higher handicapper who needs the extra launch and forgiveness or even a better player looking for a little more help and distance.

These are clubs which could be with you throughout your golfing journey – they should last you for a lifetime of golf.