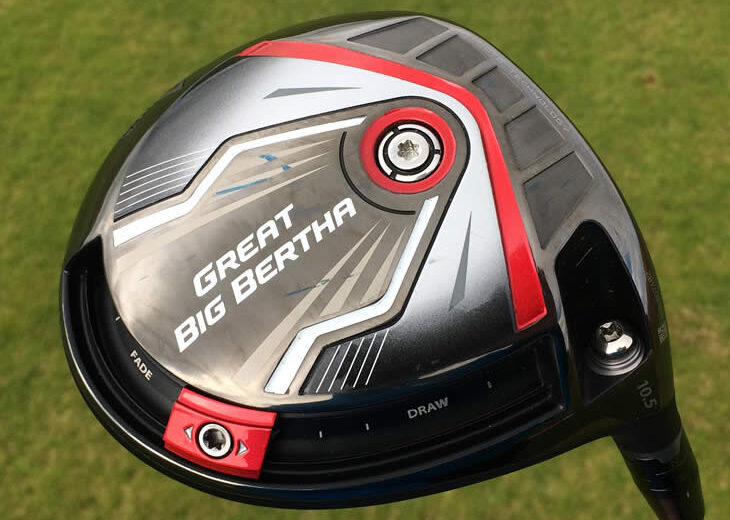 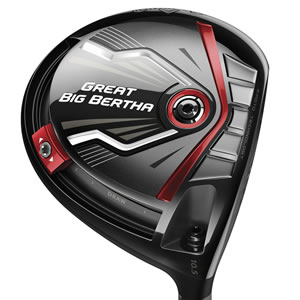 Yes I am ancient enough to remember the first time round when the outrageously bigger 253cc version of the Big Bertha was the ground breaking driver of its time.

So with drivers already maxxed out at 460cc, how would they put the Great in Big Bertha today?

Well, they haven’t made it bigger. It may be 460cc but at address the Great Big Bertha (GBB) looks smaller than their largest looking current driver, the XR.

So why is it a greater Big Bertha? Well if you buy into the explanation it is because it echoes the ground breaking nature of the original GBB. In that case I can’t wait for the re-release of the Greatest Big Bertha.

Callaway say that this is a driver for everyone that will sit between the original Big Bertha and the Alpha 815 and offers the performance of an XR with some adjustability from the 10g sliding weight around the back of the head.

This obviously looks like the Big Bertha launched in 2014 but now the sliding track is aligned more towards the heel side of the head with the track stop just half way round to the toe.

Apparently hardly anyone was using the toe end of the track in the Big Bertha to add some fade bias. They really needed more help to reduce fades so the Great Big Bertha is set up to be more neutral with a slight draw bias.

In the centre of the sole there is now a visible sole weight that seems to be some sort of source of light and power according to the sole graphics.

What it really does is move the CG lower and a little forward in the sole of the club. The crown is made of Forged Composite and the whole chassis is lighter, which comes from the Big Bertha V Series so you can see this is almost the greatest hits of recent Big Bertha features, so maybe that is the inspiration for the name too.

At address the more compact head looks pretty good with a small Callaway chevron on a matte black head. Although, if it is designed for everyone, then possibly most would prefer a little larger footprint like the XR as the GBB is verging on being a touch compact.

However the sliding weight set up may have something to do with this and the effect on the flight of the ball was subtle but noticeable, more so in fade set up.

There is also a second generation of the R-Moto face from the Alpha 815 to aid weight distribution and forgiveness and like most Callaway drivers the sound and feel were excellent.

Wherever you hit it on the face it performed well and it played a little larger than its head size, if you know what I mean.

The flight was medium high and a little lower than XR depending on how you set up the sliding weight, the usual OptiFit adjustable hosel and your shaft selection.

The stock Mitsubishi Kuro Kage shaft looks good and the club suits it very well, but if it is not for you then there is plenty of choice at your local Callaway fitting centre.

So how Great is the GBB? Well, really there is nothing to fault.

It looks good, sounds and feels great and the sliding weight and adjustable hosel gives you some fine tuning options to dial in the driver to get the most from you swing as you can tighten the weight anywhere you want along the sliding track.

The decision is do you really need this option. When it hits the streets it will be well over £300 which puts it in the upper echelon of drivers, where, to be fair, it belongs.

However for around £70 less you can get an XR that will also have an adjustable hosel and a larger, albeit slightly more closed look. The XR will probably suit you just as well because it is aimed at the majority of the market who want an off the shelf driver without the extra adjustability or investment.

That is really the choice Callaway is offering you with this driver. If money is no object or a fitting session shows you that the Great Big Bertha’s sliding weight can improve the performance of your driving, then rest assured that the GBB will be a Great Big Bertha for you.