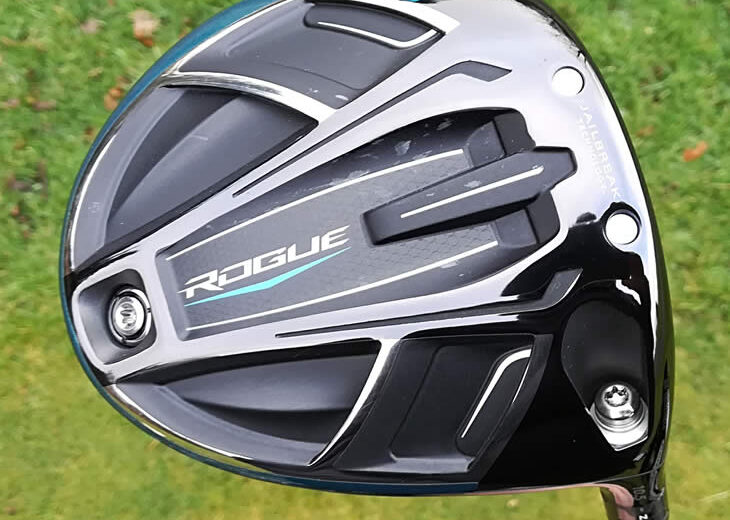 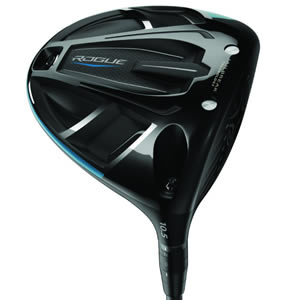 It is not strictly speaking a replacement as the Epic continues for now as the Rogue is there to provide a higher level of forgiveness as it ‘doesn’t follow the established conventions’.

The Jailbreak bars of course are still there and are now 25% lighter than before as they join the sole to the crown of the club to make the structure more rigid to return more energy to the ball, increase ball speed and make it go further.

In addition they are now hourglass shaped which means they retain the same strength but are lighter to save weight higher up to move it lower down. Everything else is lighter too starting with the Triaxial Carbon Crown which tips the scales at under 10g.

The VFT face is also lighter, thinner, faster and basically even more marvellous than it was before, if that is possible. You get the drift.

The sole is back to being titanium as the triaxial carbon that was in the Epic sole was there because of the sliding weight track. This does not exist in the Rogue and combined with a desire for a more aggressive looking sole it was dropped as a carbon sole would not have added anything to the performance.

What makes the Rogue different when you pick it up is the larger head shape at address. It is still the same 460cc as the Epic, but is shallower and deeper and this is what helps make it more forgiving, with a 16% tighter shot dispersion say the makers.

It almost has a bit of the Callaway Big Bertha Fusion driver about it with that drawn back head and viewing the Rogue as a combination of this and the Epic would not be far off the mark in terms of benefits.

Looking at the faces you can clearly see how tall the Epic is and most will prefer the new Rogue shape as it just looks like you have more margin for error.

This is backed up by the MOI numbers which at 8600 for combined vertical and horizontal MOI is 7.5% higher than the Epic and 16% more than the Callaway XR16 driver. If it was any more forgiving they would be canonising it.

As well as all the dieting that is going elsewhere in the head, the Rogue driver also loses the sliding weight around the rear of the head, which saves another 15g, all of which can be put lower and further back to drop the CG.

This is one of the reasons the Epic is still in the line because it does offer this adjustability and a slightly higher CG that may suit some players better.

Callaway say that with the Epic most players had the sliding weight in neutral or draw setting and hardly ever slid it round to the fade setting so they got rid of it and you now have a standard and Draw head in the Rogue.

The Draw head has a 1° more upright lie and the weight in the heel to give up to 7 yards draw bias provided you can put a neutral swing on it.

We will come on to you faders later, or you can deloft the Rogue head by 1° using the usual Optifit hosel and that should open the face a little to give some fade bias.

The aerodynamic SpeedStep on the crown is still there but seems less prominent than before as it smooths the airflow over the shiny head to eke out every last mph.

Callaway has been working with Boeing again on this and after much analysis they concluded that as the head rotates through the swing it was the transition from the face into the crown that was crucial and this has been made softer in the Rogue which claims to improve clubhead speed by 2%.

Also customising the club is a choice of 4 stock shafts from the lightest Aldila Quaranta at 40g, through the Aldila Synergy, Project X EvenFlow to the heaviest Project X Hzrdus at 70g, all of which are pretty good.

So does it all work? Well I went through the Callaway fitting process and then compared the results to the Epic using the same shaft in both clubs to see the differences in the heads.

For me there was not much in it for distance, which I think disappointed the Callaway guys, but they do say that for some people Epic might still be an option.

The Rogue however was still going forwards as much, but what I did notice was that the (obviously) rogue shot here and there that was up near the toe only lost around 4 yards of distance, so I would say that the Rogue was more forgiving.

The higher MOI is reducing the loss of ball speed for me and this consistency is probably the key benefit over the Epic, which would occasionally go AWOL if you didn’t hit it right.

I prefer the look of the Rogue at address as the wider and deeper head gives a little more confidence and the sound and feel are very good and still come with the carbon infused sound at impact.

If like me you had the 55g Hzrdus in the Epic driver then the Project X Synergy is probably going to be the one to go for as the EvenFlow is just that little bit heavier, but still a good option.

For those who need to reduce spin by more than the shaft will allow then there is still the Sub Zero option in the Rogue.

As before the Callaway Rogue Sub Zero driver features two weight positions in the sole that you can swap a 2g and 12g weight between to change the spin and launch.

Putting the heavier 12g weight at the front will drop the spin so if you are a 100mph plus swing speed player than that is where the Sub Zero starts to become at option.

Playing with the weights on GC2 did drop the spin for me but what I really noticed was that it was harder to keep straight.

Having the 10g weight balance further forward saw more drives go to the right for me and even though the distance was similar it isn’t the right setting for me and a fitting session with a Callaway expert will get the right one for you.

It will also benefit anyone who hits down on their driver and adds sping that way, usually seen by a negative attack angle on a launch monitor. The Rogue Sub Zero will take off the spin and because of the better forgiveness it probably has a wider appeal in this scenario than the Epic Sub Zero.

Everything else about the construction is the same and the head has a slightly smaller and taller look at address and is closer in shape to the standard Epic.

The numbers for me we again very similar so it really comes back again to the extra forgiveness that the standard Rogue head can offer, but for those who need to drop spin and have the speed the the Sub Zero is a good option.

It also has a little more fade bias than the Epic Sub Zero so for those who want an anti-left driver then you can take this head, de-loft it and put the weight forward and you will be veering to the right more than a facist with a longer left leg.

Overall the Callaway Rogue driver manages to successfully move on from the Epic driver, even if big brother is still lurking in the background somewhere.

The naming creates something distinctive, even if the colour doesn’t really bring warmth. However the cuddles come from the extra forgiveness which makes you wonder why they didn’t make the Epic like this previously and then just sit back for a couple of years.

To be fair the smaller Epic head did help with the speed and the sliding weight adjustability did give plenty or options, even if not all of them were used.

For those who found that the Epic was not forgiving enough, then the Rogue is really everything you could want in a driver as the speed from the innovative Jailbreak face is still there and the lower CG design makes it easier to keep it down the middle.