The inaugural event at Atlantic City Country Club, presented some of the more challenging conditions at a World Long Drive competition in quite some time. Weather aside, the width of the grid measured 45 yards, a significantly narrower landing area than the typical 55-65 yard wide setup utilized throughout the season.

The women’s final was a rematch of last month’s Ak-Chin Smash in the Sun final, as Carlborg faced 2016 World Long Drive champ Phillis Meti. Carlborg blasted her sixth ball of the set 283 yards, good enough to outmatch the 273-yard drive of Meti given the conditions.

“It was hard for a lot of players today to find the grid,” Carlborg said. “This is actually my 20th victory. I love this life, and everything about it.”

In the men’s division, Costello inched past Ryan Steenberg. Both competitors hit drives of 344 yards in their set – with Costello’s coming on his eighth and final ball – forcing a playoff. Costello took advantage of his good fortune to claim the victory with a 350-yard drive.

“I certainly got my money’s worth,” Costello said. “I know I have the swing to be able to compete with anyone out here. [It was] just a matter of time I thought until I was going to get a win.”

The Atlantic City Boardwalk Bash marked the fourth official event of the World Long Drive season. Justin Moose claimed the East Coast Classic in Columbia, S.C., in March, Alexis Belton and Will Hogue won the Clash in the Canyon in Mesquite, Nev., in April and Meti and Hogue won the Ak-Chin Smash in the Sun in Maricopa, Ariz., last month. 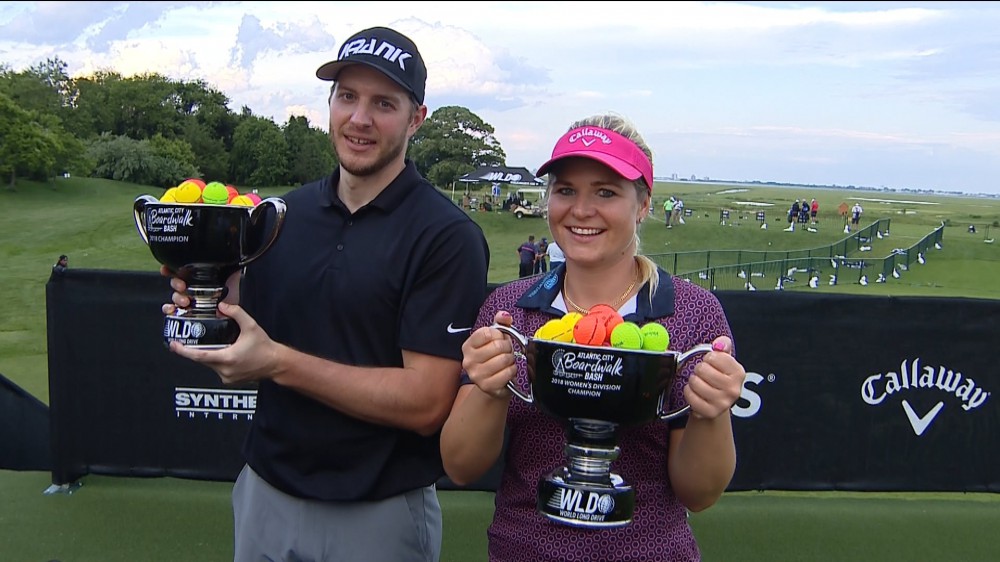