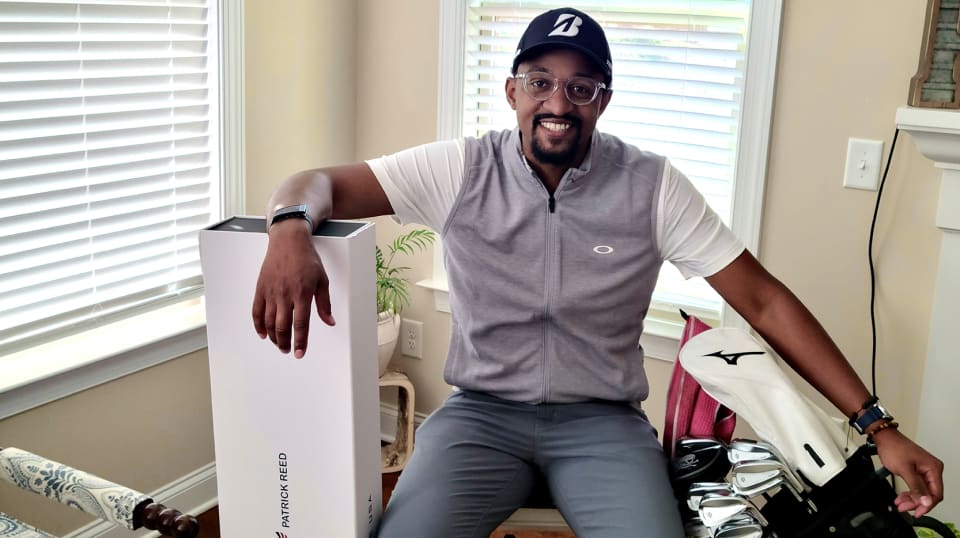 Madison, who is a member of the Advisory Board for THE NORTHERN TRUST, congratulated Penny, who reached out to say thank you. That’s when Madison, who had met Penny once at a great aunt’s memorial service, said he was sending a check to cover his APGA entrance fees.

“When it happened, my wife probably thought I was crazy because I was like, I yelled, ‘Oh my God,’” Penny recalls. “I was just sitting there looking at her with wide eyes and she said tell me what is going on.

“…And I said, he just gave me a sponsorship check to take care of the cost of all the tournaments. And I was just like, that’s crazy. And she said, no, let’s change that word. And she said, that is God. And I was like, yeah, I said, but give me a second. That’s crazy.”

Penny, who was in Reed’s gallery last year at Bay Hill as well as several times at the Wyndham Championship, has been a fan since he won the 2014 World Golf Championships event at Doral. He liked the confidence Reed showed when he talked about how he thought he was a top-five player in the world.

“His press conference was a disruptor for the golf world,” Penny says. “… I didn’t take it as arrogant. I didn’t take it as him being above himself. I took it as a person who has been dedicating his life to a game saying, I feel like I’m ready to compete, not just for this one tournament for, but for the tournaments to come. And that shows through his resume including being a Masters champion.

“And that was that moment is where I was like, I’m going to watch out for this guy.”

Penny started playing golf in 1998 when his late uncle Ellis Allen Jr., who was a “big-time golfer,” his nephew says, talked his parents into giving the then 9-year-old a set of clubs. He played recreationally with his dad but track and field grabbed his attention in high school in Rocky Mount, North Carolina.

Penny was a triple, long and high jumper at Pembroke State before an injury cut his career short. After he left school, Penny started working as a youth pastor in Greensboro, North Carolina. One day, Anthony Carstarphen, the golf coach at Fayetteville State, saw him hitting balls at the range and offered him a scholarship on the spot.

Penny, who was 25 at the time, stayed at Fayetteville State for a semester before he realized he was at a different stage in life than his 18-year-old teammates. Plus, he was offered a job with First Tee, where he has continued to work for the last seven years.

As much as Reed was impressed by the personal drive and determination that came through in the letter, Penny’s work to teach youngsters life skills while learning the game also resonated with him. Reed hosts an annual American Junior Golf Association event in Houston in June.

“It’s the same kind of thing that I’m trying to do through AJGA and through our foundation is not only grow the game of golf, but also teach a lot of things that will help off the golf course, whether it’s in business, whether it’s how you treat people or just how you carry yourself, that will better them along their way as they get older,” Reed says.

Reed says he looks forward to putting a name to a face next week. And the man who Monday qualified six times in 2012 the year before he got his TOUR card will talk to Penny about the challenge and the tiny details that separate the best players. He’ll also tell him to embrace and enjoy the journey.

In Penny, who works in customer service at Parsons Extreme Golf, Reed will find a sponge, anxious to soak up all that wisdom. But he does have one thing he plans to ask.

“I know the question that I ‘ll ask probably that’d be like one of my first questions after the nerves settle is how did it feel to put on a Green Jacket?” says Penny, whose parents attended their first Masters the year Reed won.

That’s one Reed will undoubtedly be happy to answer.