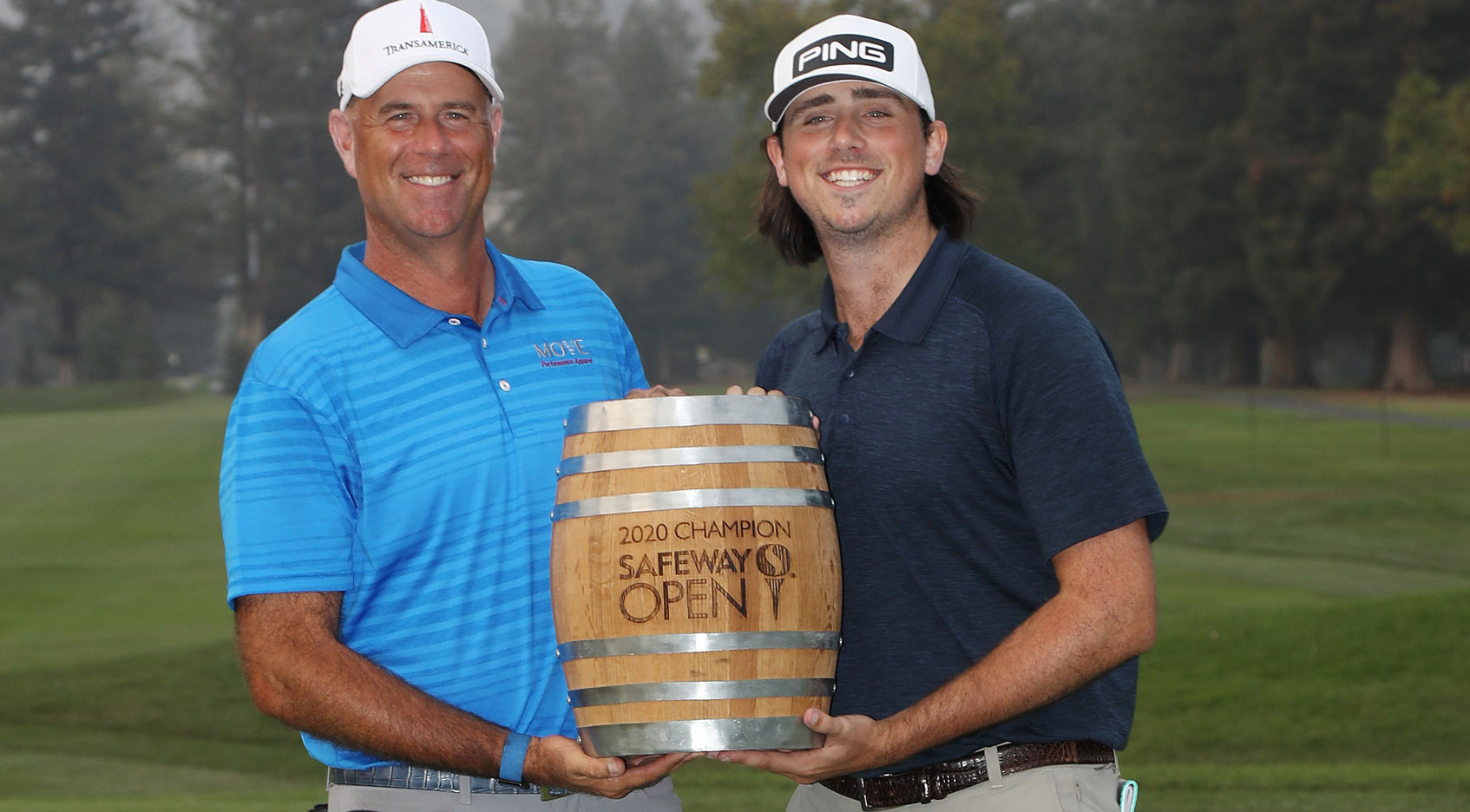 Cink dodged one when Higgs missed an eight-foot birdie soon after and another by hitting the fairway off the 18th tee and hitting his 7-wood through to the back of the par-5 finisher with style to allow a relatively simple up and down to make another birdie.

“If you go out there thinking you’re not going to lose it, then you’re wrong and you’re going to be shocked. So I was prepared to lose it. I mean, for crying out loud, I left a five‑foot putt short on the 17th hole that I needed to make,” Cink explained. “That’s not like what a champion does, but a champion does get back up off the mat when he gets knocked down and I got knocked down a little bit there and I went and played the 18th hole the best I’ve played it in my whole life.”

While Lisa had the golden words prior to the round, son Reagan had the gilded tongue during the round. The 23-year-old is not a regular caddie, in fact this was just his fourth time carrying the bag. As they came off the second green Reagan said, “Dad your tangibles are really, really good right now. Your club, your ball, your tangibles, like your ball’s doing what it’s supposed to do, you’re putting, your ball’s starting online. Let’s just take care of the intangibles today.”

Cink was impressed. And he relaxed.

“That is like great advice like for someone who’s caddied three or times in the PGA TOUR and hasn’t played in a golf tournament I don’t think since high school golf,” Cink said. “But he made a good point; my driver was doing what it’s supposed to do, my fairway woods, my irons, my wedges, my putter, everything was really doing what it was supposed to do and it was up to me to take care of the rest.

“He did a great job keeping me positive and keeping me loose out there. We just had a really great time from the get-go all week. He’s not just a ceremonial caddie. He understands golf to the very, very highest level. It was really a great experience.”

The win will see the 47-year-old now fully exempt through this season and two more after it meaning he will get through to his 50th birthday when he becomes PGA TOUR Champions eligible. He will also find a place in the 2021 PLAYERS Championship and Masters tournaments and the Sentry Tournament of Champions in Maui. As such he will have to cancel a family ski trip in favor of one in the sun. Lisa wasn’t complaining.

“This is the culmination of so many things. It’s so special to have Reagan and Stewart do this together. I’ve watched him work so hard for so many years without the results, so for those to show up now is just an amazing blessing,” she said.

When her husband and son came off the 18th green and the win was officially secured after Higgs was unable to hole out a wedge shot for eagle Lisa grabbed Stewart’s shirt again. She also grabbed Reagan’s. This time she pulled them in for a well deserved massive hug.