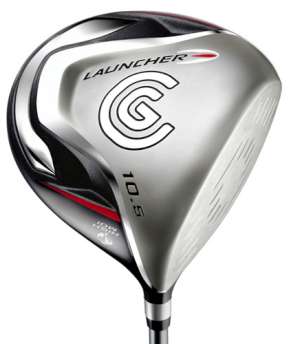 Cleveland 2009 Launcher Driver Review – The revamped Cleveland Launcher driver has a 21 % larger clubface than previous Launcher models to increase forgiveness and keep even off centre hits flying long and straight.

A horseshoe shaped weighting system in the sole of the club combines with a 23 % thinner crown to improve the moment of inertia and lower the centre of gravity to increase the stability of the club.

We have enjoyed following the progress of the Launcher range as each new driver has improved on the previous model and this new offering is no exception.

In our tests, the increased forgiveness was evident on off centre hits and the traditional design helps mask the size of the clubhead, which is large and deep.

Compared to the Cleveland HiBore Monster XLS range, the Cleveland Launcher driver is more of a players club as the higher moment of inertia means it is easier to work the ball with this club.

It is also priced a little cheaper than its sibling and with the excellent Fujikura shaft it is a very competitive driver for the price.

The Cleveland Launcher driver comes with the Cleveland Eee Zee Grab headcover as standard and these not only look great but are much easier to get on and off than many of the headcovers on the market today.