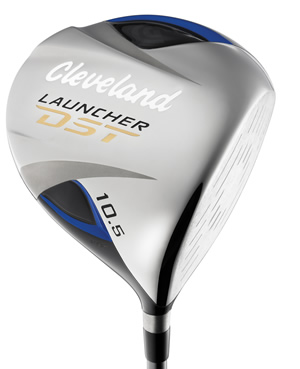 Compared to the previous Launcher the head of the DST looks much more traditional at address and not as deep back to front. The head is still 460cc but it seems more compact and one of the benefits we found was a much better sound at impact. The previous drivers were not exactly kind on the ears, but the Launcher DST is like titanium butter melting in your earlobes by comparison.

The DST Launcher is solid and the feel is excellent right across the face, which is pretty forgiving on off centre hits and lives up to Cleveland’s claim for the lightest driver on the market with impressive distance.

Cleveland say the big difference is in the overall weight of the club, which is 25 grams lighter thanks to the new head design and the lighter Diamana shaft, which is excellent and a very good quality shaft for this level of driver.

Whilst we are not sure about the blue flashes on the sole, the rest of the driver looks very clean and classy and several of our testers were pleased to see that there was no alignment graphic on the crown.

The DST Launcher is also available in a Tour version that is not as deep from back to front and has an upgraded shaft.

Combine all this with the E-Z Grab headcover, which is still the best out there, and you have one of the best value for money drivers in the market.