Cleveland Launcher HB Turbo Driver Review – To be honest, Cleveland is not the first name that pops into my head when it comes to drivers, and I’d be willing to bet the same goes for the majority of golfers reading this.But perhaps this is where we are all going wrong. They have quietly been making clubs built towards the majority of golfers for years – those who are inconsistent, who aren’t practising every other day, who don’t want to pay for lessons and who are looking for a club which can give them a ‘quick fix’ for their common swing faults. 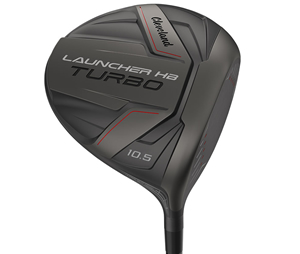 Here’s where the Launcher HB Turbo Driver comes in. It’s designed to be lightweight, fast, forgiving and may also help to straighten your ball flight too. All for an RRP of just £309.

No, you’re not going to see Tour players popping this in the bag before they head off to their 7500+ yard golf courses. The scratch golfer at your club probably wouldn’t go near it either. But for the average golfer, who play a game which is completely different altogether, it could be exactly what they need…

There are four main bits of technology utilised in the Launcher HB Turbo, helping to create a driver which Cleveland is saying launches easily, adds more speed and results in higher and straighter drives.

The Launcher range has been around for a few years now, situated in the ‘game-improvement’ category. The previous Launcher HB Driver was released a couple of years back and we were big fans of its ease of use and surprising suitability for a range of golfers, so the new HB Turbo has plenty to live up to!

A new Turbocharged Cup Face has a variable face for better consistency on off-centre strikes, by raising the COR (Coefficient of Restitution or energy transfer) across a larger area. This should results in better overall ball speeds across the face, and therefore produce more distance.

A newly redesigned HiBore Crown (which is what HB actually stands for), which features a step close to the face and aerodynamic strikes running down the back of the head, allows the CG to be moved down by 2.2mm.

An Ultralight hosel, without adjustability, means that the weight stays low and deep to promote higher launch and greater forgiveness levels – the holy grail for amateur golfers looking to improve off the tee.

Deep weighting, achieved by removing weight in other areas for redistribution and characterised by a chunky sole at the back of the sole, increases MOI (which improves forgiveness) and helps to deliver more speed.

Finally, a specially designed Miyazaki shaft has a CG located higher in the grip, which means that additional mass can be added to the head without affecting the overall CG.

The test was two-fold.

First of all, I headed to Bramall Park Golf Club to play 18 holes. I wanted to see how the driver felt, sounded, and looked out on the course. I was also interested in the performance too – what would the flight be, how would it perform into different wind directions.

I then looked to back up my findings with some numbers, so I headed to The Range in central Manchester as usual to use their Foresight technology, collecting ball data to compare how the Launcher stacked up to my own current driver.

When I first saw this driver I was immediately reminded of recent Ping models, thanks to the design of the crown. The three raised lines running horizontally to the back of the head work like Ping’s turbulators to make it more aerodynamic, along with a small dimpling effect in this portion too.

At address, the club did tend to sit a little shut which I found to be a slight distraction. If you struggle with a slice then it could help to straighten your ball flight a little bit, but I found myself trying to override this and square the face myself as I just didn’t feel comfortable with it.

On the whole however, I was pretty impressed with the look of the driver and if I hadn’t known the price beforehand, I probably would’ve guessed it was similar to the likes of Callaway and TaylorMade.

The first thing I noticed when I hit this driver was the sound. It’s pretty hard to ignore. We all know that golfer who can be heard from halfway across the golf course – either because they talk so loudly or because of their equipment. Well, this driver certainly falls into the latter category, it’s a real head-turner.

Some golfers like the loud noise, but personally I prefer a quieter, duller sound with the driver so the performance would have to be really impressive if I was to put a driver like this in the bag.

Out on the golf course, the Launcher lives up to its name by producing a high ball flight and it felt really easy to get it up in the air. If you do struggle with this it could be especially useful in the winter months to have more carry as it means you don’t have to rely on roll-out to get the distance you require.

I was impressed with the overall consistency of the driver too. The Turbocharged Cup Face did a good job of maintaining performance on a couple of heel strikes, which didn’t lose too much distance and remained pretty accurate.

The weight-saving did result in the driver feeling a little whippy to me, with the Miyazaki shaft weighing just 50 grams and despite being a stiff flex, I think it was probably on the lighter side of stiff. Whilst this does make you feel as if you can swing the club fast with ease, I also felt that it makes timing a little more difficult.

Having said that this driver is optimised for golfers who swing it at around 95mph and less, whereas my club head speed is usually just over 100mph.

I could see this being a really popular and suitable option for golfers needing some help with launch, whilst the slightly closed address position will also help a little bit if you struggle with a slice. There’s also a Draw option where the bias is even more pronounced, for people who really struggle with a slice!

From my testing at The Range, I found the spin rates were good at just a shade under 2800 rpm, and the consistency of the spin rates between different shots was also impressive considering there were strikes across the face. The launch angle at 15 degrees was a little higher than my own current driver due to the 10.5 degree head, whereas mine is 9 degrees.

In terms of distance, an average carry distance of 232 yards was around 15 yards less than my current driver, due to the lower ballspeed and the peak height of 35 yards being a little high.

However I did manage to get one up over 240 yards carry on a centre strike which is more than enough to give me a chance of hitting into the greens with shorter irons.

I also had the two shots lost to the right which I felt were due to the whippy head and shaft combination as mentioned previously, which meant that I didn’t square the face up in time.

The second shot I hit with the Launcher during testing was a poor strike, from low in the heel, and the carry distance was around 10 yards less than the rest of my shots, which is a pretty reasonable drop-off. The ball speed also only dropped by around 1 mph compared to the average, showing that the Turbocharged Cup Face was doing its job.

If you’ve got a slightly tighter budget and are looking for a driver that still looks good and performs well then you can’t go wrong, especially if you need a little bit of help with launch and forgiveness.

The look at address and sound might not suit everyone but I could see this being an excellent option for golfers who are relatively new to the game, or someone who doesn’t naturally generate great deals of speed.

Though there’s still technology packed into the head I actually felt that the driver was pretty simple – no moveable weights or adjustable hosels. It’s really just designed to be a fun driver to use which launches high and gets the ball out there.

Despite the fact that this driver isn’t really aimed at me I still found myself quite enjoying using it. I’m not sure I would use it because of the drop-off in distance compared to my own driver, and because the noise it makes would really take some getting used to.