AVONDALE, La. – Jon Rahm and his partner, Ryan Palmer, teamed up to card nine birdies in Saturday’s third round of the Zurich Classic.

For the pair, that not only meant an 8-under 64 that earned them a share of the 54-hole lead with Trey Mullinax and Scott Stallings at 23 under, but also nine “treats.”

A day earlier, Rahm’s caddie, Adam Hayes, brought a bag of Skittles with him onto the golf course and started giving them to Rahm and Palmer after every birdie. They made seven of them in a sweet 7-under 65 foursomes round.

“We figured we needed to get something going, so we had Skittles for birdies,” Palmer said, “so every birdie we made, [Hayes] pulled out [the bag] and fed each one of us one Skittle.”

That tradition continued Saturday in four-balls, where Rahm played the role of candy man by accounting for all but one of the birdies. The final one came from 15 feet at the par-5 18th hole, with Palmer looking at a 3-footer for birdie.

Added Palmer: “I get one chance to make birdie…”

Palmer, though, made arguably the most crucial putt of the round a hole earlier. Both players hit their tee balls in the water on the par-3 17th, but Palmer was able to hit his third shot to 9 feet and make the bogey putt to avoid further damage.

“That putt Ryan made was probably the most important shot we made so far in the tournament,” Rahm said. “Felt like a birdie, and then to keep tied for the lead, very important.”

Instead of playing ahead of Sunday’s final pairing, Rahm and Palmer will go off last alongside Mullinax and Stallings. Tee time is at 12:42 p.m. local time. Bring the Skittles. 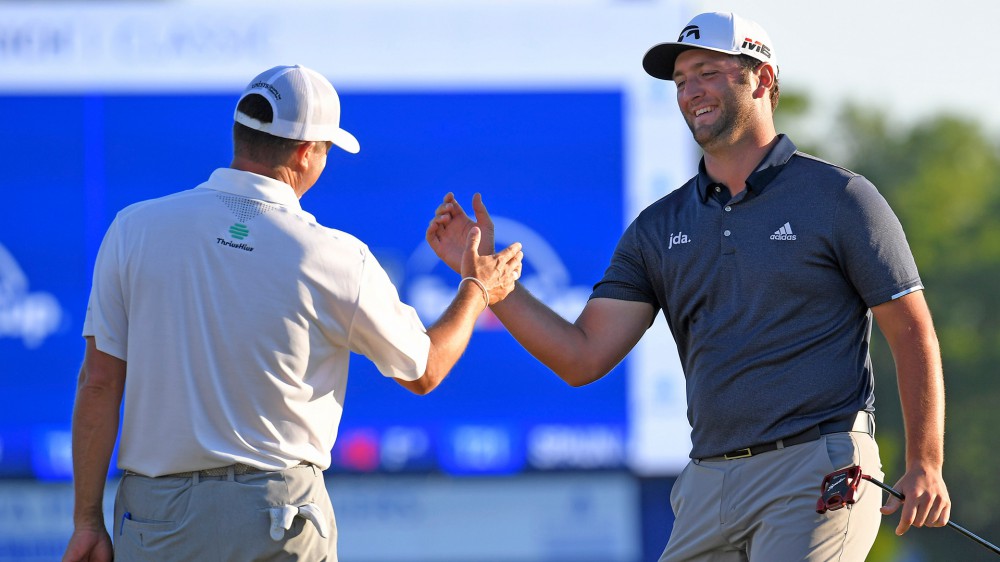