And there are Annika’s kids.

They both got in on the record-setting effort Friday at the ANA Inspiration.

Sung Hyun Park and Pernilla Lindberg moved to 12-under 132 as co-leaders in the year’s first major championship.

Park, who is a product of the women’s golf boom Se Ri Pak inspired in South Korea, shot an 8-under-par 64. Lindberg, who was among a generation of Swedes inspired by Annika Sorenstam, posted 67.

Park and Lindberg broke the championship’s 36-hole scoring record set by Lorena Ochoa when she won at 11-under 133 in 2006.

Park and Lindberg take a three-shot lead into Saturday.

They will be coming into the weekend from places as different as South Korea and Sweden.

Park, 24, is a superstar in her homeland, the only player besides Nancy Lopez to win the LPGA’s Rolex Player of the Year Award and Rolex Louise Suggs Rookie of the Year Award in the same year. Park won the U.S. Women’s Open last year and briefly rose to world No. 1 near year’s end. She shared POY honors with So Yeon Ryu.

Lindberg, 31, is looking to make her first LPGA title a major championship.

Park is currently No. 4 in the Rolex world rankings, Lindberg No. 95.

While Lindberg is the underdog, she’s relishing the role.

“As a player, I might be kind of slow,” Lindberg said of her development. “But, for sure, I’m going in the right direction all the time. Obviously, nowadays, we have a lot of young players that come out and win right away. I haven’t let myself get frustrated that I haven’t, maybe, had the success yet that I’ve wanted. I just kind of keep plugging away and feel that I improved year by year.

“I’m collecting so much experience out here every year, that I’m getting more and more ready just to be in this situation. Every time I’m there, I’m just so much more comfortable.”

Park is the kind of big hitter the Dinah Shore Course favors. She rocketed up the leaderboard Friday pounding her driver.

“I just felt really good about my driver,” Park said.

Park is able to play the bomb-and-gouge game that works so well here. She holed a wedge from 101 yards for eagle at the 15th hole.

Lindberg is strategically plotting her way around. She is the only player in the field who hasn’t made a bogey this week.

“Playing pretty smart,” Lindberg said. “Yesterday, I birdied all the par 5s. Playing in the afternoon, I managed to get close to quite a few of them, and when I can’t, I just trust my wedges. I know I’m usually pretty good with wedges in my hands.”

The duo will be looking to see if they can push each other to break more records this weekend. Dottie Pepper holds the championship’s 72-hole record at 19-under 269. She set the mark in 1999. 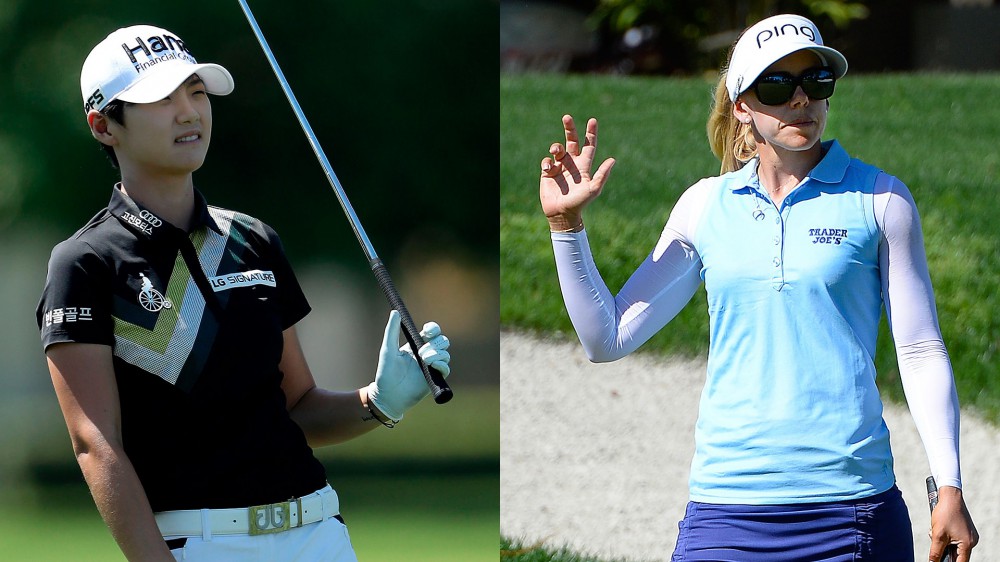