Cobra Connect GPS Shot Tracking Review – If you have used the Arccos Driver sensor then you will be familiar with what I am about to describe as the Cobra Connect GPS shot tracking system uses the same technology.

However instead of screwing a sensor into the grip of your driver, Cobra has worked with Golf Pride to develop a new grip that has a space for the Arccos sensor to be embedded into the end. 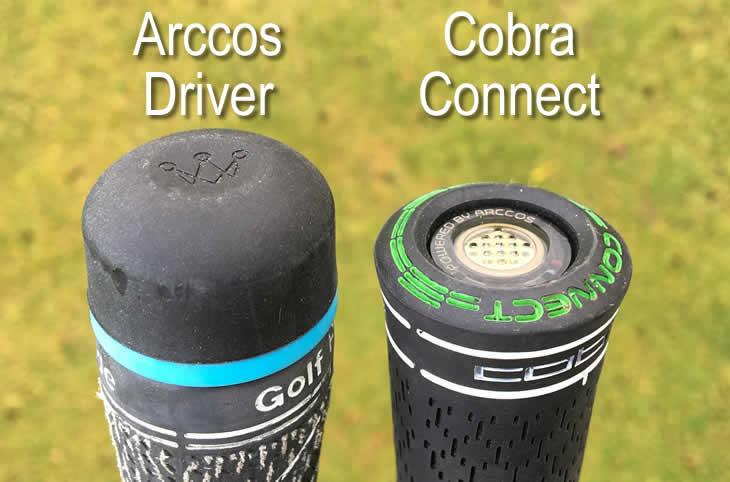 The great thing is that the Cobra Connect grip is included as standard with the Cobra King F7 driver and Cobra King LTD Black driver and will probably feature in future models too.

If you ever need to regrip your Cobra driver then replacements are available from your local official retailer.

With your free Cobra Connect grip, you then download the free Arccos Driver app to your Android or iOS smart phone and you are ready to go. When you arrive at the course, just open the app and the phone’s GPS will locate which course you are on to select.

This is does very quickly and hopefully your round will be quick too as the location services involved in using the app fairly chew up the battery power, so maybe have a portable charger handy.

Pairing the Connect sensor with the phone via Bluetooth is very straight forward and all you have to do thereafter is put your phone in the front pocket of your trousers and play golf.

You will either need big pockets or a small phone, but even with an iPhone 6 I did not find it much of a distraction.

No other input is required as the phone senses when you are making a swing with your driver automatically and then marks the total distance of the shot by recognising when you make the next swing on the hole.

Off the record, it detects full swings rather than contact with the ball, so a full power practice swing may count. It won’t pick up two swings as you will be in the same location, but even if it does, it is possible to edit them in the app.

It does mean you could fake a swing at your preferred distance, but that is not in the spirit of the game of golf, or as we say in Britain, it’s not cricket.

As you walk down the hole the Connect app also acts as a yardage GPS giving you front, middle and back yardages to the green.

After arriving at your tee shot and playing your second, the app displays the distance the ball travelled and if you have hit the longest drive ever recorded on that hole, you will be crowned ‘King Of The Hole’.

Mere mortals coming behind you will then see an arc on the map of the hole that they now have to reach to depose you. There is a handy link to share the graphic above across major social networks so you can brag about your coronation, which frankly is hard to resist.

After the round you can gloat or cry over your driving stats and clicking on the Cobra link brings up videos and tips from Cobra Tour players like Rickie Fowler & Greg Norman to help you eke out a few more yards or just hit it straighter.

All in all the Cobra Connect was a lot more fun than I was expecting, as I had thought tracking only one type of shot could be a bit pointless. However, compared to the full on shot tracking systems, just doing the driver requires no effort and the competitive element within your playing group to hit the longest tee shot or become the global King Of The Hole became strangely addictive.

The strain it puts on your phone’s battery power and the fact that it has to be in your pocket are slight drawbacks, but despite this I really enjoyed using the Cobra Connect.

Because the app is free and the sensor comes built in with the club you can use it as and when you feel like it, especially if you come across a downwind, downhill hole that has yet to be crowned.