Cobra King F6 Series Driver Review (F6, F6+, F6+ Pro) – At the launch for the Cobra King F6 driver, I was told that one of the company mottos was ‘We are cool stuff that works.’

Certainly Cobra do produce pretty cool looking clubs and many of the features that work are continued through from previous models into the King F6 drivers. 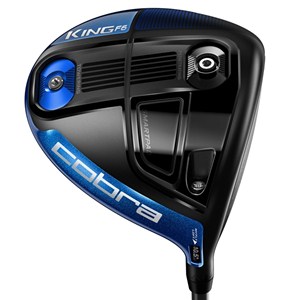 The Speed Channel around the perimeter of the face increases ball speeds on off-centre hits and combined with the E9 variable face thickness makes the Cobra King F6 every bit as forgiving as previous models.

The face itself is made forged from 811 Titanium and features the usual E9 variable face thickness design on the rear.

The MyFly8 adjustable hosel changes the loft through five setting from 9° to 12° with an additional 3 draw settings for those who need some right to left help.

This combines with the raised SmartPad that enables the club to pivot on the sole to keep the face square as you alter the loft and lie of the club as it is adjusted, which it does well.

For Cobra fans, none of this will be a surprise, but what is new about the King F6 is Cobra’s focus on creating CG neutral drivers that started with the King LTD driver. The Centre of Gravity Neutral Axis (CGNA) is the line perpendicular to the face going to the back of the head. Get the CG on this line and as far back as possible and you maximise forgiveness and ball speed.

The King LTD got it on the CGNA and the King F6 gets it lower than previous Cobra drivers, but above the King LTD in most circumstances. This is because unlike the LTD, the F6 uses moveable weights to alter the CG position across two different heads.

The standard King F6 replaces the Cobra Fly-Z driver and at address the 460cc head is almost identical in shape. Whilst the width of the lighter Ti-811 titanium body is roughly the same, the face on the King F6 is shallower and wider to lower the CG.

The crown of the club is part of the weight saving strategy and it is incredibly thin, down to as little as 7mm in some places.

At address the F6 looks a little on the closed side, especially if you increase the loft to the top of the range, but it actually plays pretty neutral.

The feel and sound was excellent and much better and not as brash as the standard Fly-Z that the F6 replaces.

The sole weight in the Fly-Z was not moveable, but the King F6 has an orange 10g polycarbon weight that can be swapped with the black plastic cover that is not shown, to move the CG back or forward a little.

Putting the weight at the front will reduce the spin and lower the launch.

Swapping the sole weights was a bit fiddly as you had to unscrew and refit two weights, but this only has to be done once or twice to get the right settings.

This needs to be done with the help of a launch monitor and a Cobra fitter, as it is the combination of loft and weight that will move the CG to give you the optimum performance for you.

Even though this is the higher launching version of the King F6, having the weight in the back and the loft at 10.5° for a 100mph swing speed was the optimum setting.

There are a choice of three colours this time round of black, blue and white and not only do they look great, but the Cobra King F6 was really good fun to hit and I liked the look of it.

And then I met her sister.

The sister model is the King F6+ driver that is also 460cc with a more compact and rounded head that I preferred the look of at address.

The other plus point is that she is even more flexible as the moveable tungsten/aluminium sole weight has been increased from 10g in the Fly-Z+ to 18g in the King F6+.

This slides along 9 possible positions on the CarbonTrac to alter the CG using an angled track so that the CG can be moved as far forward or back as possible.

The CarbonTrac is made from carbon fibre infused with plastic and is 8g lighter than the titanium FlipZone track that was in the Fly-Z+, which is why the sole weight can now be heavier.

Moving the weight from back to front can change the spin by up to 500rpm and the vertical effect on the flight was noticeable.

In the same loft settings with the weight in the back, the F6+ creates a lower ball flight than the standard F6.

Generally it sounds a little more hollow and loud too, but how much will depend on where you place the weight on the sliding track. This is a result of the Carbon Fibre crown that is half the weight of the titanium version on the F6 and works with the CarbonTrac to lower the CG.

It sounded and felt the best when the weight was at the front, but I then had to increase the loft up from 10.5° to 11.5° or even 12° using the MyFly8 hosel to get a decent flight as the spin was too low.

The lower spin of the F6+ suited my swing speed of around 100mph and in all these three loft settings, Trackman showed that it outperformed the F6 by up to 5 yards of carry on average.

However if you need an even lower launch, then there is also a King F6+ Pro version which is the same head as the F6+, but the lofts on the adjustable hosel loft go from 7° to 10°.

This was a much lower flight than the F6+, but with the weight back and the loft set at 10° I did manage to get some of my longest drives, provided that I ensured my set up made me hit up on the ball through impact as much as possible.

The Pro did produce my longest carry on test and also the longest total distance. However the latter was due to a lot of roll as the lower spinning shot landed shallower and ran further. It was also not as consistent for distance for my swing speed as the lower loft resulted in more variation in impacts, so faster players of 105mph would probably find the F6+ Pro a more viable option.

Overall I feel that the Cobra King F6 driver is a big improvement on the Fly-Z. The way the standard F6 driver looks and plays now means that it can reach out to a wider range of better players who might have been dissuaded by the looks and high spin in the past.

The choice of three crown colours is down on the four or five options of the Fly-Z, depending on which market you were in. They all look great but if you prefer a contrasting face colour for making alignment easier then the you should pick the blue or white options. Rickie and his orange fans will have to make do with the sole weighting system.

Choosing which version of the Cobra King F6 driver to go for will depend on your swing and how much forgiveness you want and this really requires a fitting session.

For some it will be clear which model to go for, but for me a lot of the settings were producing the same distances, but with different levels of spin, trajectory height, carry and roll.

On Trackman the optimum for me was King F6+ at 11.5° with the weight back, which is good as it would be my choice of club based on looks at address. This was also a little frustrating as I preferred the feel and sound of the F6, especially with the weight in the front.

If the Trackman numbers between the two models are closer for you, then it could come down to price and with the standard F6 being £50 cheaper, then that could tip the balance, but either way I could see both models being used by all levels of golfer.