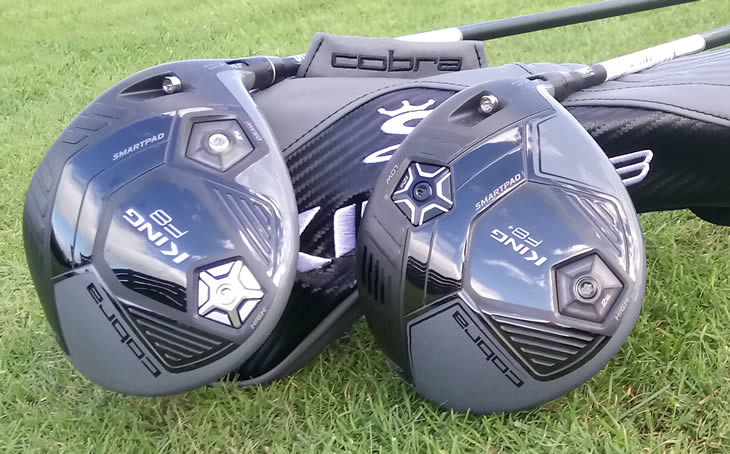 Cobra King F8 Driver Review – Well, we all want more distance from our driver, but of equal importance is also more accuracy and that is something Cobra has focussed on with the Cobra King F8 driver.This is not a short term thing for them, as they have been working on what became the King F8 and F8+ drivers for the last two and a half years. 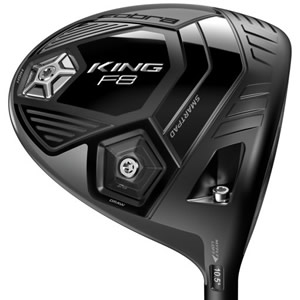 At the launch I was shown video of their factory where after welding the faces to the T-8-1-1 titanium body, the driver heads were then hand ground to remove the evidence of the weld and make the faces flat.

Except they are not flat as they have bulge and roll, or horizontal and vertical curvature that creates the gear effect to keep off centre hits straight.

Whilst Cobra has been finishing their drivers to extremely high tolerances over the years, there can be slight variances in face thickness as it is done by hand and that is the same for every make of driver.

It does seem odd that in this day and age someone spends all day every day finishing driver faces, but that is the unseen world of club manufacturing. What you will no doubt be seeing more of is Cobra’s new milled face process that removes the person from the process to create a more exact face that is 3% thinner and 10% lighter than before.

The pattern created by the process is distinctive and gives the F8 face a technical look that hides a tilted axis to match the impact pattern and the improved three word tech (TWT) called Dual Roll Technology that has a different level of face curvature at the top and bottom to get the right launch.

The carbon fibre crown is lighter than before to help save weight and move it lower and further back and on top of it is one half of the 360 Aero feature that is an air tripping device to make the head more aerodynamic.

Other manufacturers have done this using titanium, but on the Cobra F8 the raised section is made from a lighter polymer in order to save more weight.

The other half of the Aero 360 is on the sole and this time it is made of titanium as it needs to be stronger to survive contact with the ground. Better not roof your drives then…

I am just about out of tech breath, but one more to go and that is the Cobra Connect Arccos sensor in the grip that pairs with the app of the same name on your smartphone so you can track you drives and you can read a separate review of Cobra Connect here.

So as you can see, those two and a half years have been well spent in getting the head technically up to speed and compared to the previous Cobra King F7 driver the head shape is a little more pear shaped than before and I prefer the new look.

As you may have spotted by now, Cobra has ditched the bright colours for either an all black or shown here is the latest, greatest colour that is about to hit everything in high end fashion called…Nardo.

It’s not really my thing, but as the father of teenagers I know that everything I say or do is inherently not cool, so it probably means that it is.

Cobra has done this because they felt that the coloured heads were distracting from their technology stories and I buy that. Nardo is not going to be as polarising as red or blue, so it will probably do OK, so get used to it as it is going to be everywhere, including probably Rickie Fowler.

The other main difference from the F7 is on the sole where the three weight positions have become two thanks to the front position being given the heave ho.

This makes sense in some ways as the King F8 is about high launch and more forgiveness so you don’t need the front position to reduce spin for that.

However if you want to take some spin off then you will have to move the heavier 12g weight into the Draw position or reduce the loft using the adjustable hosel.

Compared to the F7 the King F8 not only sounded lower pitched and more solid, it did also perform better in the Draw and High weight settings.

Adjusting the MyFly hosel through the same range of 9° to 12° also varied the performance a little but not in a linear way for me.

The spin and launch should increase as the loft does and the 12° was the highest in this regard, but remember the lie is also changing as you move the loft, even despite the SmartPad on the sole keeping the face straight and that will have an influence too.

As it was, the lower lofts were best for my 106mph swing speed and therefore it is just a question of which launch I preferred to see as the distances were very similar.

You could play around for ages with the 16 different combinations of loft (lie) and weight position and most of them will end up around the same so it will probably come down to personal preference for how the face angle looks and the feel of the club depending on where the weight is located.

Or if you still can’t get it right then you can try the King F8+ driver.

The Cobra King F8+ driver is the lower spinning version of the F8 driver and comes in a more compact 440cc head.

The face looks a little steeper and squarer at address but the overall shape is still very pleasing to the eye.

It is one swing weight heavier at D2 and the Aldila NV 2KXV Green 65 shaft is a touch heavier and half an inch shorter at 45.25 inches to give it that better player feel.

The adjustable hosel is 1° down on the standard model and ranges from 8° to 11°.

The shorter head front to back brings the CG forward to reduce spin and on the sole the two weight ports are now in line with a single rear ‘High’ port at the back and a central ‘Low’ port at the front for heavier 12g weight to go into.

For me the 12g weight in the front ‘Low’ position was best at the mid-range loft of 10°, but I am sure maybe upping the loft to 10.5° would increase the launch without changing the spin too much and hopefully get a few more yards.

Cobra say that the difference should be about 500rpm spin and 0.5° launch between the two weight positions so my actual swing was outperforming the robot there and shows that you just can’t trust actual golfers.

It’s all small margins with the F8 adjustability, but that is not to say that it has no effect, because it does. It just seems that there are possibly several combinations that will deliver the best results and the one you choose will be the one that also fits your eye the best too and there is nothing wrong with that.

Clearly Cobra has put a lot of thought, time and energy into the King F8 driver and it is probably more of a step change in design than we have been used to from them in recent years.

The 360 Aero and carbon crown features make sense and the simplified weight design is easy to understand. Knowing that the face is machine milled rather than hand polished may give you a bit more confidence that the loft is what it says it is and certainly the renowned Cobra forgiveness from the E9 face is still there.

It’s good to see a manufacturer charging the same price for the regular and low spin versions of the driver and the King F8 is a good value for money driver considering what you are getting.

With the change to Nardo, Cobra show that they are not afraid to keep re-inventing themselves and if you haven’t tried their drivers before then the King F8 could be the one to transform your game as well.