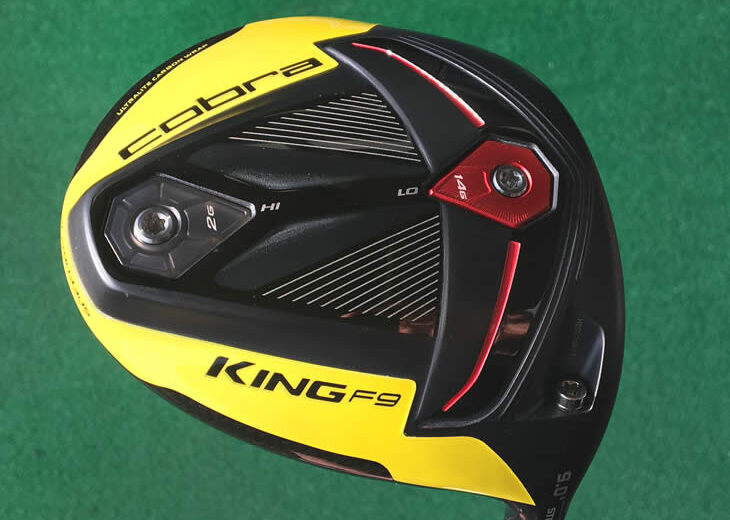 Cobra King F9 Speedback Driver Review – Driver design tends to focus either on aerodynamics for club head speed or low CG for forgiveness, but Cobra claim that the King F9 Speedback driver can do both equally as well. 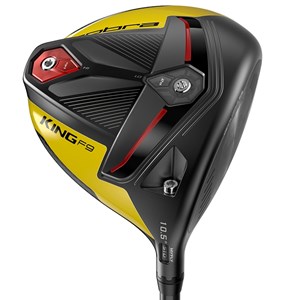 In order to make the head go through the air quicker with less drag, they have softened the leading edges, made the crown a little flatter and moved the skirt or trailing edge of the driver upwards.

This high ‘tail’ is what improves the aerodynamics as it looks more like the shape of an aeroplane wing.

However for a low CG you need to get the weight down, so the Speedback design combines this aero shape with a weight that protrudes from the sole at the back to lower the CG position.

This does of course hurt the aerodynamics a little, but the gain in performance from the better CG position offsets this.

The Speedback design features sculpting around the sides of the head, where the yellow graphics are, to improve the airflow and it looks a bit like the back of a high performance motorbike.

However 75% of the aerodynamic gain comes from the softer leading edges on the carbon crown that carries over from the previous King F8 driver.

The King F9 crown now also features ‘Power Ridges’ that act as air tripping devices to smooth the airflow, so the whole package is quite a departure from what Cobra has done before.

The King F9 face continues with the same circular Milled CNC pattern of the F8 that is more consistently thin from one head to the next than if it was finished manually.

The face also continues the tilted bulge and roll axis that aligns with the high toe to low heel miss pattern that most golfers have.

The Dual Roll design has an upper face with more curvature to give a higher launch with less spin, whereas the lower face has less curvature to do the opposite.

Cobra’s faces have always been renowned for their forgiveness and the King F9 Speedback driver is no different. Combining this face with a faster head shape and a low CG position should do the business.

And so it proved, as when I tested it on GC2 against the previous King F8 with Titleist Pro V1x balls, I saw an increase in ball speed of 2mph.

The sound and feel of the King F9 driver was also a little better too and combined with a good selection of quality shafts you get a club that feels very poised and stable.

You can also adjust the launch conditions by swapping the weights on the sole. There is a red 14g steel weight that you can swap with the 2g black plastic version to move the CG back and forward a little.

Playing around with these adjustable options did improve performance. Moving the heavier weight to the front should have dropped the spin a little, but for me it was only fractionally lower and gave the same distance. As you are only moving 12g across 7cm, then the benefit is more from a change in balance, sound and feel from the different weight position.

The straighter face increased ball speed by another 1mph and I also preferred the slightly squarer look at address, so a win all round.

Like all Cobra clubs these days, you can also verify your performance on the course by using the Cobra Connect sensor that is built into the grip and feeds data back to the free Cobra Connect app and Arccos Caddie service.

Since the AMP Cell driver in 2012, Cobra has played around with bright colours on their driver heads. Then with the King F8, they went all Nardo grey on us. Now they have gone for a black crown at address and then a flash of yellow on the bottom, which Rickie Fowler describes as ‘business on top and party underneath’.

I would go along with this, as I think Cobra has finally got the right balance of visuals that will have wider appeal because they are classy with a little bit of style.

The forgiveness from the face is as good as ever and now there seems to be extra ball speed from the more aerodynamic crown and restyled sole.

The balance of the club was also very good, feeling light, yet stable and likely to find favour with all levels of golfer.

Getting the right loft seems to be the key to unlocking the performance, whether with the initial head loft or by using the adjustable hosel. I am not sure the weights really do anything more than fine tune the feel, but for some they may prove more beneficial.

Performance is right up there with the leading drivers in the market and for me the King F9 is one of the best drivers Cobra has done. With a seriously competitive price, the Cobra King F9 Speedback offers great value for money and is going to be one of the drivers to beat this year.