Cobra Radspeed Women’s Range Review – Cobra have long been big supporters of the women’s game. They have championed Lexi Thompson since the day she turned professional, and have always had women alongside men in their marketing materials.This was proven again by the fact that the brand sent me their full range of women’s clubs from the new Radspeed range to review, including all 7 irons. 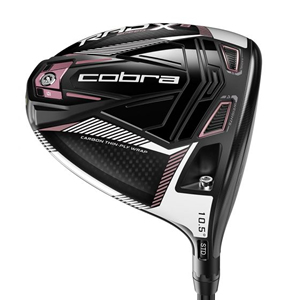 Cobra have long been big supporters of the women’s game. They have championed Lexi Thompson since the day she turned professional, and have always had women alongside men in their marketing materials.This was proven again by the fact that the brand sent me their full range of women’s clubs from the new Radspeed range to review, including all 7 irons.

These products are in line with the men’s Radspeed range, with all of the same technology but just a light pink colourway instead of the lime green.

If you want a more in-depth look at the technology behind each club, you can read our full articles on the Radspeed range here:

The XB Driver is larger and less offset than the XD, which is designed to promote a draw flight.

It is essentially identical to the men’s Radspeed head, albeit it with a light pink colourway instead of the lime green.

Despite the fact that the heads are both 460cc, the XB just looks really big down by the ball which is a great confidence boost, although it’s still nice and lightweight.

These are a great classical shape, without too much offset. There’s a smart, curved black head complete with Cobra logo on the top of the crown which helps you to align the ball.

I also liked the fact that Cobra have painted golf ball shaped grooves on the face of the fairway wood which is also great for alignment too, as it helps you to frame the golf ball in the middle of the club head.

Cobra’s favourite rails are again prominent on the sole like a set of skis waiting to help you out with turf interaction.

The first thing you notice on the Radspeed irons is the carbon fibre strip across the topline which instantly identifies it as Cobra.

I actually didn’t mind this as I felt it made it easier to line the head up, but then I showed it to my producer and he said that it would put him off buying the iron.

I think technology like this is bound to divide opinion, and will be especially hard to accept for people who are quite traditionalist about their gear, but Cobra aren’t afraid to be pretty bold when it comes to innovation and design and I think we can only applaud that.

You can also see the 3D Printed medallion in the back cavity in the head which looks like a small bridge situated behind the face and adds to the contemporary design.

Everything about this entire set is light, subtle and easy to hit. The feel is forgiving and surprisingly quiet in the strike.

The set wedges that came with the iron feature a milled face which added lots of feel around the green, and the ball reacted with good spin levels once it landed. I played the chip shots as I would with my own wedges and they felt great.

After a long day of reviewing golf equipment these were the ideal clubs for my tired golf swing! I didn’t feel like I had to swing too fast or work too hard to get results, the ball just seemed to fly off the face into the sky and the distances I achieved were impressive.

The driver did tend to favour the left side of the hole, but I think that was mainly due to the lightweight shaft which didn’t suit my swing speed.

The flight was high, just as Cobra promised, and I found it to be forgiving on off-centre strikes.

The Radspeed hybrid was the best looking of all the clubs in the range for me, with a petite head shape that’s really well crafted and performs great.

The hollow split rails were especially useful for improving the consistency of my strike, particularly when hitting from the wet rough.

My iron play was solid throughout the test, and the forgiving nature of the irons meant that they helped me out on the occasions where I didn’t strike the ball particularly well.

I found it almost possible to get the club head to dig into the turf, it just kept powering through and this really helped me out on shots that I caught a little heavy.

The biggest surprise of the range for me was the versatility of the wedges around the green. On the first hole I played a chip and run from 30 yards short of the green with a pitching wedge.

The ball reacted really well on the green and there was no bounce or spring off the face like you might expect from a hot iron like this.

I also enjoyed using the sand wedge from the bunker due to its wide sole. The club just seemed to skim right through the sand with ease.

These may be power irons but they still allow you a bit of feel and they aren’t too chunky to look down on either.

Cobra make some of the best women’s clubs on the market today, and they just seem to get it. Us women have never been an afterthought in any of their products or marketing which is great.

Ok, they’ve used pink/rose colours which is a little obvious but as the main body is still black, it makes them look great in my opinion.

From the Radspeed XB Driver all the way down to the irons I’d recommend every club in this set, there’s just no weaknesses to it.

I think that women’s clubs do need the distance element as I have never heard any of the women that I teach saying that they hit it too far or too high – usually there is a lack of speed in their game.

These clubs add effortless power. When testing women’s irons I don’t usually hit them as far as my own because the lightness of the shaft means that I often have to hit them softer.

But with these irons, because the head is so powerful, even with a slower swing speed the 7 iron was still getting up to around 145 yards which is my average.

Another huge benefit is the fact that you can use Arccos shot tracking technology in every club. The only other company to offer this technology is Ping but their GLe2 range came in before that deal was struck, so Cobra are the only ones catering for women in this respect.

In terms of performance, style and price, these are the best women’s clubs that I have used.

Who are they aimed at?

Any women with a driver swing speed under 80mph. They really add distance to your game and will improve your consistency when hitting into the greens too.