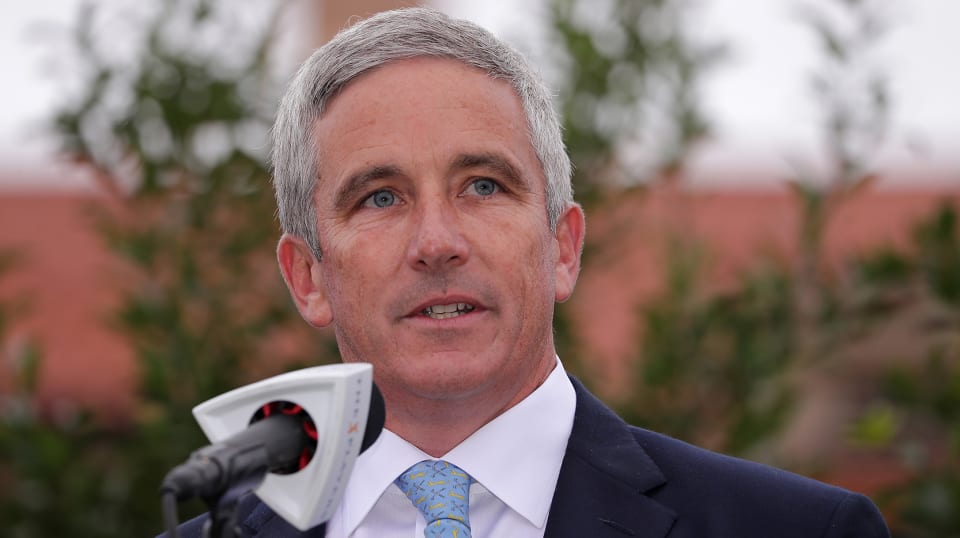 PONTE VEDRA BEACH, Fla. – The end of the year is a time for reflection. PGA TOUR Commissioner Jay Monahan did that Thursday from his office at PGA TOUR headquarters, discussing 2020 and what’s ahead in the New Year.

This was a difficult year for all because of the coronavirus pandemic, but the TOUR was able to inspire its fans and lead professional sports back onto the playing field when it returned in June. And, despite 2020’s challenges, the TOUR was still able to generate $160 million for charity this year. It’s an accomplishment he said “we can take an incredible amount of pride in.”

Recreational golf also played an important role for so many, serving as a respite from the stresses of this difficult year.

Commissioner Monahan sat down with PGATOUR.COM to give his perspective on this year. He discussed how golf helped him cope with stress, why he kept his wristband from every event in the Return to Golf, what he missed most this year and why there’s reason for optimism about the future of golf.

“To me, the challenge is the opportunity because there’s such momentum behind our sport,” Monahan said Thursday. “Making sure that we use this momentum to the long-term benefit of our game, to the long-term benefit of the PGA TOUR and certainly our overall industry, is both the biggest challenge and the biggest opportunity because we’re in a period where we’re reaching more people than we’ve ever reached before.

“We’ve got an opportunity to reach and bring a new and diverse audience into our sport, and people are going to hopefully continue to be playing our sport and playing it in record numbers. That’s exciting, but it will only be exciting in retrospect when you look back and say we were able to use this to the benefit of the sport.”

Here’s more from our discussion with the PGA TOUR’s Commissioner:

“Once the TOUR returned, we knew we would have to take it one tournament at a time. The wristbands represented two things. One, they meant you were tested and tested negative, and that’s a good thing. Two, they meant that we were able to get that tournament in. When I went to the Charles Schwab Challenge, I knew that I wanted to have a lot of those and I was hopeful I would. And when I look at them, that’s what they mean. They embodied the incredible work that our players, caddies and our team members put in to operate these events safely and responsibly.”

“Like everybody, we were working around the clock every day when the pandemic started. For the first six weeks, I was first out on the Stadium Course on Sunday mornings with my brother and two of my mentors. It was an opportunity to get away from things for a little while. It was helpful for my own health and well-being. I leaned on the game to help me. And I’ve continued to play and try and apply myself to the game through the pandemic, with limited success, but it’s been, like so many people, an incredible outlet for me.”

What he missed most about tournaments in 2020…

“Fans. That energy on-site and the way our players feed off of that, it’s such a huge part of the success and the heart of the PGA TOUR. To not have that was really difficult and you heard that from our players.

“I was concerned whether the intensity of the competition would come through on the broadcast and our platforms. Any concerns were answered in Week One, with Daniel Berger and Collin Morikawa at the Charles Schwab Challenge. I could feel the intensity and it was reflected in the numbers the following week. Everyone was talking about it.

“For several weeks, it felt like we were looking at a final round with so many players in contention. I was in my den watching the playoff between Collin and Justin Thomas at the Workday Charity Open. Like everyone, I was texting a lot of people saying, ‘Can you imagine what this would be like with fans?’ The ground would have been shaking when both of those putts went in. It was just one of those moments where you were like wow, this still feels really, really intense.”

“Our work isn’t done. As we go back to Hawaii and we resume our season, the same principles will apply. We’ll need to be intense and diligent about all these protocols so that we can keep our TOUR going and keep inspiring our fans. And I’ll be thankful that in this environment we’re still able to celebrate our tournament champions and those players who made it to the TOUR Championship in 2020.”