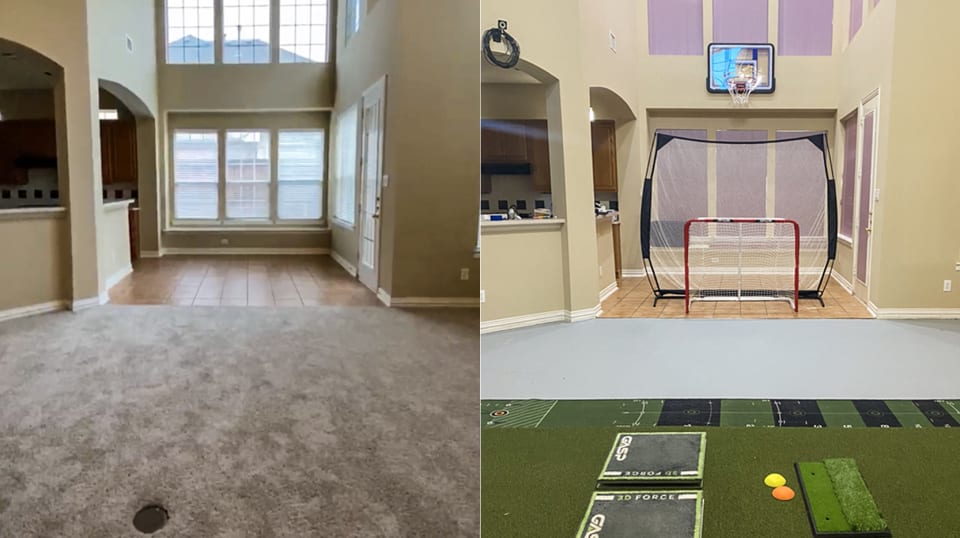 His search for answers has made Como one of the game’s leading
instructors. He studied under many of golf instruction’s biggest names
before breaking out on his own. He was the youngest instructor named to
Golf’s Top 100 list and hosts two shows on Golf Channel. He consulted
with Tiger Woods during the early stages of Woods’ latest comeback, and
now coaches DeChambeau (along with DeChambeau’s longtime coach, Mike
Schy), Immelman, Coody (and his twin brother, Parker, who also plays for
Texas), Grillo and Jamie Lovemark. Como also is the Director of
Instruction at Dallas National Golf Club.

The gadgets in Como’s
living room allow him to measure things that were once invisible.
Guesswork has been replaced with objectivity. He quickly loaded his new
residence with a Gears 3D Motion Capture, GASP force plates and a
K-Vest, as well as high-speed cameras and launch monitors. Design 2 Golf
helped assemble the setup. Such technology is available in biomechanics
laboratories and a handful of golf academies, but they’ve never been
installed in a suburban subdivision.

A video camera used to be an
instructor’s most important piece of technology, but that only offered a
two-dimensional view of a complex motion. Trackman was the first tool
that gave players and teachers a view into the important, but
imperceptible, occurrences at impact. Now technology — such as 3D
motion capture and force plates — give teachers objective measurement
of things that are invisible to the human eye.

The 3D motion
capture system provides a clear picture of a player’s movement at any
point in the swing. Gears captures more than 600 images per swing, and
tracks both the club’s grip and head. Force plates measure how much
force a player is putting into the ground, and where that force is being
applied at different points in the swing.

Being able to
objectively measure more aspects of the golf swing has led to less
conformity in instruction, not more. A swing’s aesthetics have taken a
backseat to physics.

“I think instruction is more focused on what matters now. We’ve learned that (the swing) is not about putting the club in certain positions. It’s more about dynamic movements and forces and torques that act on the club,”
said TOUR player Charles Howell III, who works with instructor Dana
Dahlquist. “We can measure things better and there’s more smart people
in golf instruction now more than ever. The cool thing is I think
they’re asking better questions, which is what matters.”

This technology
gives objective measurements that differentiate between “feel” and
“real.” For Rose, it was enlightening to see that what he thought was an
exaggerated movement only resulted in a minor change.

“What you
see when things are measured three-dimensionally, the data that comes
out of it, it doesn’t translate when you see it through an iPhone,” Rose
said. “It was really interesting to me how much I had to feel something
to make the correct move.”

Some eschew such technology for fear
of information overload. Others enjoy being able to quantify what is
otherwise unknowable. Pierceson Coody, for example, doesn’t look at the
information. He relies on Como to distill it to its simplest form.
DeChambeau, on the other hand, desires it.

He can analyze how a
swing thought will impact his actual motion, allowing a trial-and-error
process that helps him find the right cues.

“I try a lot of
different things, and 99.9% of them don’t work, but it’s great
information to have so we know what doesn’t work and when we find that
little nugget, it’s special. It’s very special,” he said. “That’s how
you gain an edge out here, when you find these little things that can
make all the difference for repeatability, for speed, whatever it may be
that you’re trying to accomplish.

“Even through quarantine as I
gained speed, I figured out some cool little things that allowed me to
repeat motion a little more consistently.”

DeChambeau not only
leads the PGA TOUR in driving distance but had a stretch of seven
consecutive top-10s that was capped with his win at the Rocket Mortgage
Classic. He finished in the top 10 in all four starts after the TOUR
season resumed, thanks in part to his time spent in Como’s lab. They
were able to find a way to create incredible clubhead speed while
maintaining enough control to keep the ball in play.

“We’ve done a
lot of work on how to control the face while creating so much speed,”
Como said. “The force plates were great for understanding some of the
physics of how to create more speed and Gears has been great for
measuring the clubface throughout the swing. Bryson wants to know what
changes from a forces perspective based on what he is thinking. He can
objectively measure what those cues are actually creating in his swing.”

And how they’re changing the game.