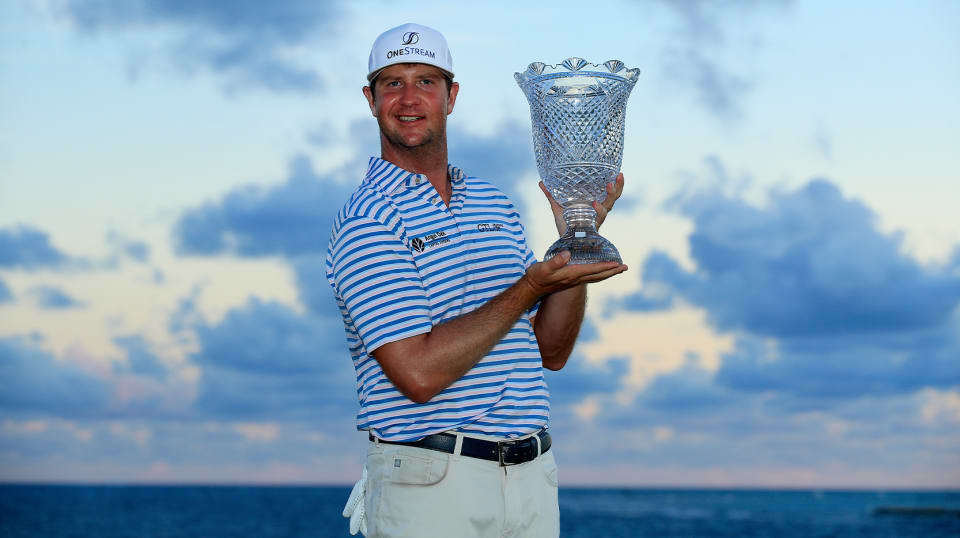 Four of the five winners at the Corales Puntacana Resort & Club Championship, including last year’s champion Hudson Swafford, return to paradise to try to rekindle some past magic.

The event, played opposite the WGC-Dell Technologies Match Play, returns to its usual spot on the schedule after being contested in September 2020.

FIELD NOTES: Each of the last four winners of the event (Swafford, Graeme McDowell, Brice Garnett, and Nate Lashley – when the event was part of the Korn Ferry Tour schedule) will be teeing it up in Puntacana… The Monday Qualifier has already occurred, with Eric Cole, MJ Daffue, Chris Wiatr, and Andrew Yun earning spots… Former college stars who are in the field on Sponsor Exemptions include Justin Suh and Andy Ogletree. Suh finished T14 in September which, at the time, was his best-career TOUR result (until the next week, when he finished T8 in Las Vegas)… Miguel Angel Jimenez is teeing it up on the PGA TOUR for the first time in a non-major/non-World Golf Championships event since 2009, when he finished T64 at The Honda Classic.

COURSE: Puntacana Resort & Club (Corales Golf Course), par 72, 7,670 yards. Designed by Tom Fazio and opened in 2008, this resort course has tested some of the world’s best for five years. The course is wide open off the tee, but the green complexes are tricky and the wind is unpredictable. The final three-hole stretch, ‘The Devil’s Elbow’ has a dramatic forced carry of the Bay of Corales on 18 and is one of the most idyllic runs of golf on TOUR.

STORYLINES: Golfers who were inside the top-10 on the Korn Ferry Tour Points List at the end of 2020 earned a spot for the alternate-field PGA TOUR events in 2021. This week’s contingent is led by No.2-ranked Taylor Pendrith, while No.1-ranked Will Zalatoris is playing the WGC-Dell Technologies Match Play… Rafa Campos is looking to build off his T3 result in Puerto Rico and hopes to spark some local enthusiasm once again. Campos, the TOUR’s lone Puerto Rican golfer, has had plenty of success in the Dominican Republic as well since playing the event on both the Korn Ferry Tour and PGA TOUR… Every year that the event has been contested on the PGA TOUR the winning score has been 18-under… The 7,670-yard Tom Fazio design is one of the longest courses the TOUR plays all season… Joel Dahmen returns to Corales for the first time since 2019, when he finished T12. Dahmen is the highest-ranked golfer on last season’s FedExCup standings teeing it up this week in the Dominican.

LAST TIME: Hudson Swafford held off a hard-charging Tyler McCumber to win for the second time on the PGA TOUR. The win came after two years of struggling on TOUR – and came with just two starts left on a Major Medical exemption. At one point in the final round, Swafford had a four-shot lead but made a double bogey on the par-4 13th at Corales and added another bogey on the par-4 15th. He birdied the tough par-3 17th, however, and knocked in a par-saver on the 72nd hole to go the whole week without three-putting. The Corales Puntacana Resort & Club Championship victory came three years after Swafford’s maiden TOUR win at The American Express. McCumber finished at 17-under par, one shot back of Swafford’s winning total. Mackenzie Hughes, Nate Lashley, and Adam Long rounded out the top five. Hughes’ third-place result came just one year after notching a runner-up.