Tiger Woods and Phil Mickelson teamed together during a practice-round match Tuesday at Augusta National and walked away victorious over Fred Couples and Thomas Pieters.

No participant offered a final score, or the stakes involved, but after going 2 up early, Couples reported that he and Pieters got “shillelaghed” by the two superstars.

Oh, what Hal Sutton would have given that result in Oakland Hills.

Couples said that Woods and Mickelson set up the Tuesday game. Couples wanted to play a practice round with Pieters, because he likes his game, and it just “worked out.” Woods told Couples during their nine-hole round Monday that they were playing with Mickelson on Tuesday – a rarity, to be sure, given their competitive friction over the past two decades.

Their ill-fated Ryder Cup partnership notwithstanding, this was the first time that Woods and Mickelson have played a practice round together since the 1998 LA Open.

Starting on the back nine and playing in front of crowds that often were 10 deep around the tee box, Woods eagled both of the par 5s – a 15-footer on 13 and then a 4-footer on 15. Mickelson added five consecutive birdies on the back nine (Nos. 13-17).

“It was very loud, very fun, and they hit some really good shots, wow,” Couples said.

Pieters didn’t stop to talk to reporters afterward, offering only this: “Tiger was brilliant.”

Though Woods didn’t initially acknowledge Mickelson on the 10th tee, they shook hands walking off the tee and then chatted extensively throughout the round.

Before Woods rolled in his eagle putt on 13, Mickelson came over to offer a read, standing over his ball and visualizing the line. When the ball tumbled into the cup, Woods smiled and shook his right fist.

On 15, after Woods had already won the hole with his short eagle, he and Mickelson retreated behind the green for some short-game practice. With Woods standing a few feet away, Mickelson took a three-quarter swing with a lob wedge, popped the ball straight into the air and dropped his shot a few inches from the plastic disc on the back part of the green. Next, he turned toward the left edge of the green, where Tuesday’s pin was located, and hoisted another flop shot that plopped onto the green and trickled into the cup, igniting a huge roar. Grinning, Mickelson turned to Woods and bumped fists.

“That was just silly,” Woods said.

“They enjoyed beating us badly, I will say that,” Couples said, adding: “I feel bad for Thomas, because I couldn’t have helped Jack Nicklaus in his prime today. Thomas had a lot on his shoulders.”

Couples said the energy around Augusta National on Tuesday morning was “unreal,” especially with the quality of play on the back nine.

“I think come Sunday, they might be paired together on Sunday,” he said. “They’re playing extremely well. They love the course. And they’re going to do very, very well.” 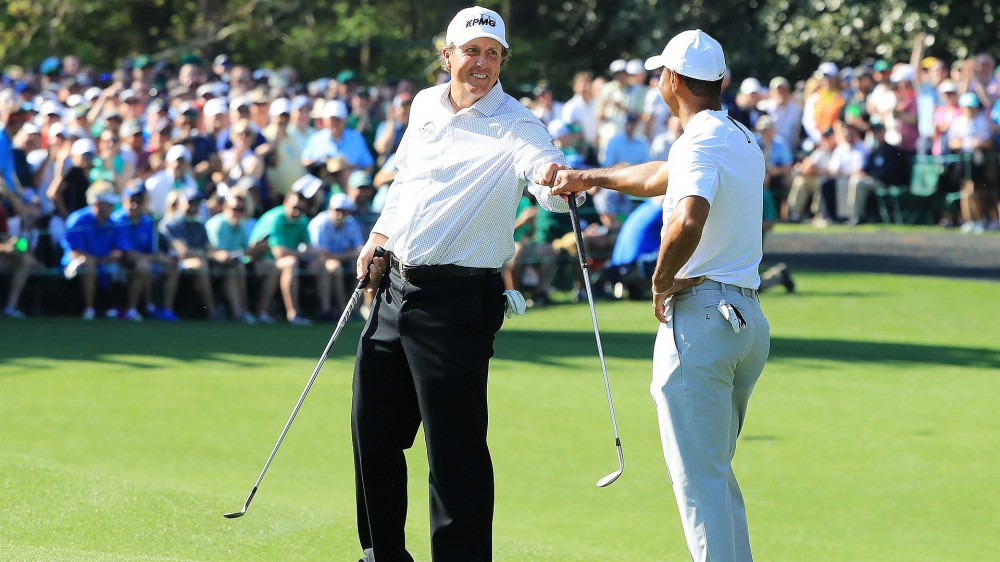 Watch: Holmes 3-putts from inside of 4 feet; JT follows with 4-putt