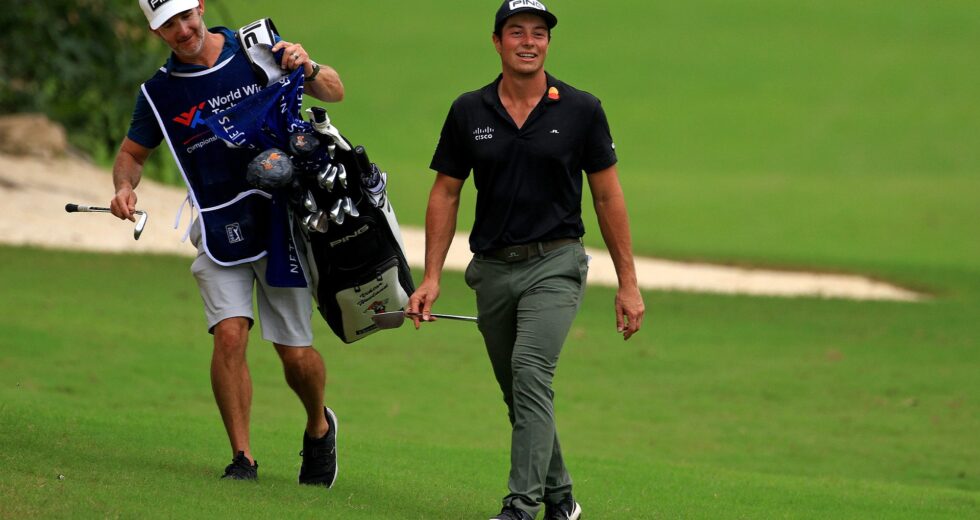 Practice makes perfect, but sometimes practice doesn’t go perfectly, and Mayakoba’s defending champion, Viktor Hovland, had quite the equipment scare before his round, yet still fired a first-round 4-under 67 in Mexico.

New Zealand’s Danny Lee was doing a speed-training session on Mayakoba’s range before his round, which caught Hovland’s eye. Hovland asked Lee if he wanted to try his driver that’s an inch longer to see if he could get his ball speed up and the experiment didn’t end so well as Lee swung for the moon.

“Yeah, I don’t know where it snapped or how he snapped it,” Hovland said, “but I just look up after he hit the shot and it was in pieces.”

Even though Hovland only had a backup head and not an emergency shaft for his Ping G425, he kept his cool and got by with a little help from a competitor, which might have better suited Mayakoba’s 7,017-yard layout anyway.

“James Hahn was in front and he was nice enough to lend me one of his backups,” Hovland said. “It’s a little bit shorter, it’s a different shaft, but honestly, almost helped me this week because it’s a little shorter. It probably goes 10 yards shorter, but I just felt like I could really hit it a little lower and a little straighter. So I’m hitting that thing really well.” Wolff’s opening 61 another step in comeback

Is Matthew Wolff back? There’s mounting evidence to suggest that, especially after Day 1 at Mayakoba.

The 24-year-old Norwegian who’s T-20, six shots behind former college teammate Matthew Wolff for the 18-hole lead, was not phased by his pre-round bruhaha. He ranked T-3 in driving accuracy and only missed the fairway on two holes (Nos. 11 and 16) where he didn’t use a driver off the tee. That may be because Hahn’s driver isn’t much different from Hovland’s.

“I think it’s half an inch shorter and a different shaft,” Hovland said, “but as soon as I like hit a couple with it, I was like, this feels pretty nice, I think I can work with this.”

Hovland, who is trying to become the first player on Tour to successfully defend a title since Brooks Koepka at the 2019 PGA Championship, was pleased with his overall round but cited issues with his flatstick on why he wasn’t higher on the World Wide Technology Championship’s leaderboard after Day 1.

“Hit a lot of greens and gave myself some looks,” he said. “The only thing I would have liked, to have got my distance control a little bit better because I hit a lot of good shots that were 20, 25 feet away past or short. Just didn’t make very many putts.”