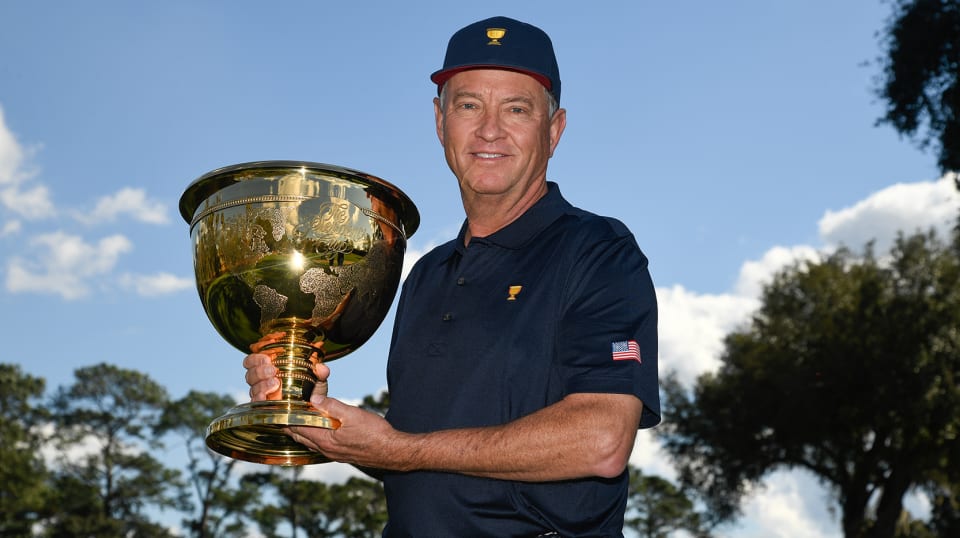 Love is part of a nucleus of players – Woods, Phil Mickelson, Steve Stricker, Zach Johnson and Jim Furyk, among them – who became part of a task force in 2014 to develop the kind of dynamic leadership that would help reverse the fortunes of the Americans, who had lost six of the last seven Ryder Cups.

“This is what’s driven us, and me especially, since 2014 reset, is Phil said we have to give these guys the best chance we can to succeed every year,” Love says. “And that’s what’s fun. So, if I’m captain or assistant captain or cart driver, I don’t really care.

“I just want to help give Dustin (Johnson) and Brooks (Koepka) and Tiger and all the guys on the team, a chance to win.”

The Americans have fared much better against the Internationals in the Presidents Cup, which began in 1994 when Love went unbeaten at 4-0-1. But a year ago, the U.S. had to rally in Sunday’s Singles to seal the win, and Love knows the narrow defeat had to be a confidence-builder for incoming Captain Trevor Immelman’s team.

“They have an up-and-coming, excited, we-came-close attitude,” Love says. “So, we’re not going to sit back. We’re going to try new things and try and get better and obviously build on what we’ve been building on since ’14.”

Charlotte is already showing signs of major support for the Presidents Cup, too. Corporate sales are extremely strong with all 12 of the highest-priced hospitality venues sold out. Ditto for the VIP tickets for the Green Mile Club that are priced at five figures.

“I’m like, Holy Cow, this is going to be massive,” Love says. “So, I’m getting more and more excited for our team about the possibilities. … We’ve been on an upward swing. New York (at Liberty National in 2017) was great. But this is going to be as much of a home game as I think maybe we’ve ever had for the Presidents Cup.

“You know how excited North Carolina is going to be. And we’ll throw a little Carolina blue in the outfits every once in a while. … I’m going to get one of (UNC basketball coach) Roy Williams’s plaid jackets to wear.”

Love, who is a member of the North Carolina Sports Hall of Fame, may or may not be kidding about that dubious piece of sartorial splendor. But he has relationships with sports figures across the state like Williams and NASCAR great Jimmie Johnson and Carolina football coach Mack Brown and even Duke coach Mike Krzyzewski, who spoke to the U.S. Team prior to the 2018 Ryder Cup, that he hopes to leverage to make the week a special experience for his team.

“And you just think about Michael,” Love says of NBA great Michael Jordan, who is his old friend and golfing partner from when the two were in school together at Chapel Hill. “He loves coming to these matches.”

Love says he relies on his long-time sports psychologist, Dr. Bob Rotella, for most of his coaching advice. But he thrives on the opportunity to pick the brain of people like Williams and Krzyzewski and New England Patriots head coach Bill Belichick, who met with Love twice in 2016 when he spent time at the team’s practice facility.

“That was really cool,” Love says. “And you tell a player, you tell him look, trust me, you just do your job and don’t worry about what the other guys are doing. That’s what Coach Belichick does. Do your job and trust that guy’s going to do his job.

“I watched Roy give a speech to the Carolina golf teams and boosters one time. I’m like, holy cow, this guy loves his school, and he loves his team, you know? And if you can express to your players, hey, look, I’m going to do whatever it takes to make you guys successful. Just come to me.

“Coach (Dean) Smith was the same way his players. His players weren’t players for him for four years, they were family. I think that the relationship I have with Dustin to a new guy, like Kevin Na, that I don’t know that well, that’s where we have to be better as captains is getting to know guys and letting them know that we’ve learned from other coaches. This is how we’re going to be successful if we just do these things.

“They’re really, really good golfers. We don’t have to worry about that part of it.”