Her name is all over everything about the most colorful victory celebration in women’s golf, except the pond itself, which is named after Terry Wilcox, the former tournament director affectionately known as “Poppie.”

While Alcott first made the leap 30 years ago, the plunge she took with Dinah Shore three years later ranks as her most memorable, and maybe the one that most cemented the leap’s tradition as something that would set the event apart as a new major championship.

“I didn’t have any clue what I was starting 30 years ago,” Alcott said. “It was just a moment where I embraced my happiness.”

But it was the moment with Shore that took the leap beyond women’s golf’s narrow boundaries.

Shore, the singer, actress and television personality, devoted herself to promoting the women’s game. She put her name on the event, first as the Colgate Dinah Shore and later as the Nabisco Dinah Shore. She gave it credibility, setting it apart as a must-play event, and she helped turn it into a major.

Alcott was the featured speaker at the ANA Junior Inspiration program on Saturday night, a welcome dinner to the juniors competing in the qualifying event. She reminded all the young players there what Shore meant to a championship they all so want to play in.

Shore, who died in 1994, is remembered at the 18th hole of the Mission Hills course named after her, the course that is home to the ANA Inspiration. Shore’s image, with her right hand extended in a wave, is captured in marble in a statue there. “I told those young players on their way to the 18th green, they should give Dinah’s statue a high five,” Alcott said.

Shore was a friend to tour pros, and something of a mother figure to many of them, which led to her Poppie’s Pond leap when Alcott won in 1991.

Alcott’s mother, Lea, died six months before Alcott won the event for her third and final time that year. Shore knew the pain the loss caused Alcott, and she encouraged her that year.

“I saw Dinah in Los Angeles a few months before the tournament,” Alcott said. “She knew how close I was to my mother. She said, ‘You need to win my tournament again. You win it this coming year, and I’ll make the jump in the water with you.’”

Alcott didn’t know if Shore was serious, until Alcott was walking down the 18th fairway on the way to a runaway victory. She saw Shore standing in the wings behind the green.

“Dinah always wore white pants with a red blazer at the event,” Alcott said. “But she was wearing black pants, and her assistant was carrying a robe.”

“I think Dinah was serious about jumping in the water,” Alcott told Kurre.

Shore did, in fact, leap in with Alcott.

And the video and photographs of the celebration showed up in places they wouldn’t normally appear.

“In the photos after, Dinah is in a robe, with her hair up in a towel,” Alcott said. “I’m standing there dripping wet.”

“I didn’t know what I was starting,” Alcott said. “But people tell me it’s one of the most iconic things in women’s golf.” 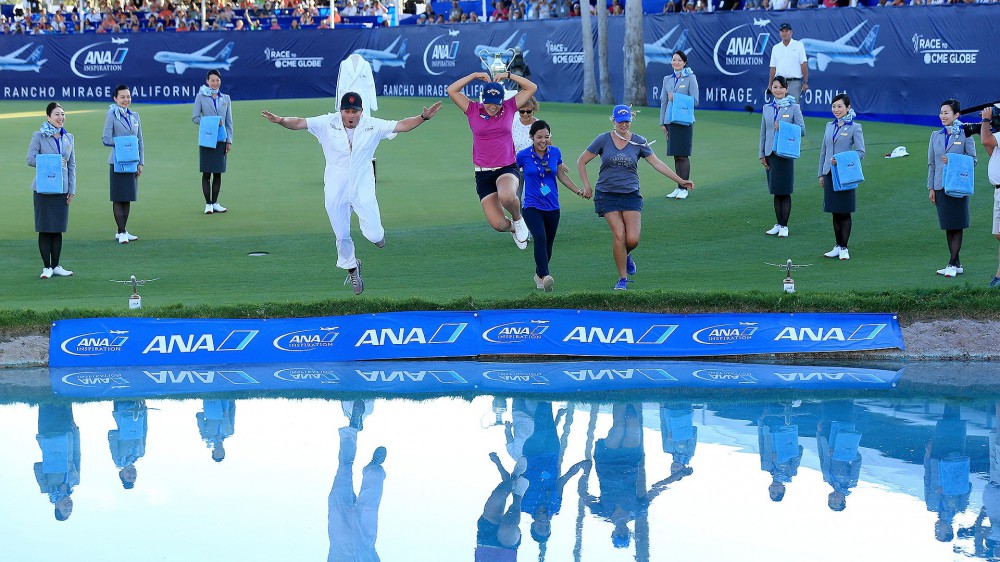 Watch: Reed races in 40-footer to put away Spieth