PEBBLE BEACH, Calif. – They can wear opponents down in classically different ways.

Dustin Johnson can be the most intimidating player in the game, with his mighty lashes making other players’ games feel small.

Jordan Spieth can be the most infuriating player in the game, with his ability to hole monster putts maybe even more demoralizing than Johnson’s ability to bash the long ball.

That’s what intrigues about their pairing through the first three rounds of the AT&T Pebble Beach Pro-Am.

Who is going to wear down whom?

Give the early edge to Johnson.

With a 5-under-par 67, Johnson moved into early contention to win this event for a third time. He’s two shots off the lead.

Spieth opened with a 72, leaving him a lot of work to do if he’s going to defend his title here.

Johnson bombed his driver around Spyglass Hill, where it was no surprise he hit shorter irons than Spieth into just about every hole. He was 30 yards past Spieth on more than a few holes.

Spieth? He didn’t give himself a lot of good chances at birdie. He made just one on the round and took 30 putts, marking the ninth consecutive round he has hit 30 or more putts.

Johnson made six birdies and one bogey.

“I’ve been driving it well for awhile now,” Johnson said. “For my game, if I drive it well I’m going to play well most of the time.”

Johnson said he got away with a few misses Thursday, and he’ll be looking to fix that when they move to play Monterey Peninsula on Friday. He did birdie all four par 5s at Spyglass.

“I hit good drives on all of them,” Johnson said. “I had to make a couple nice up-and-downs. I definitely need to take advantage of the par-5s. I have to do that on every course.”

Nobody’s counting out Spieth. Going into Thursday, his 68.8 scoring average was the best in this event over the last 30 years by anyone with more than 10 rounds played. 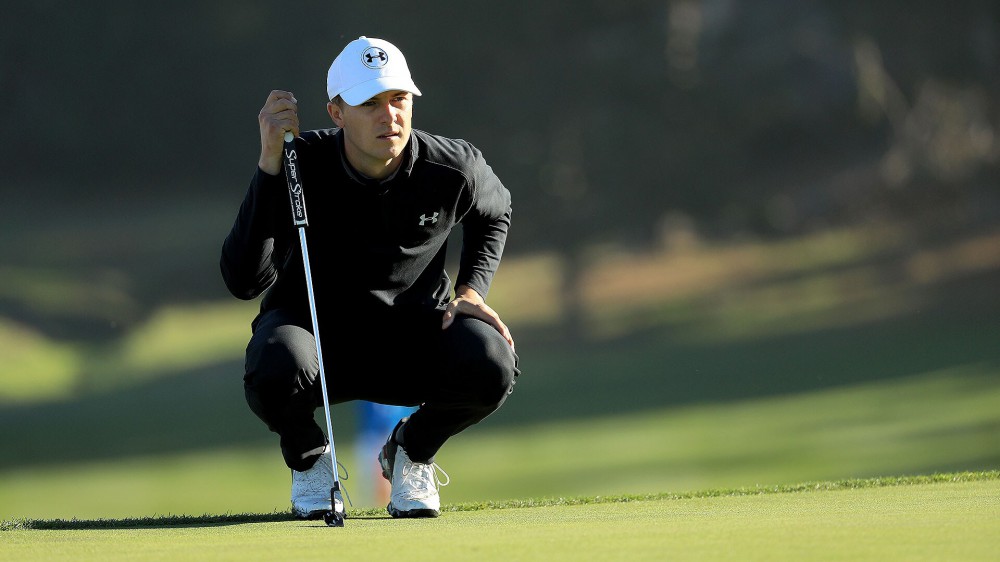