LA ROMANA, Dominic Republic — One of the Dominican Republic’s own could become the second straight player to win the Latin America Amateur Championship in his home country.

Juan Cayro Delgado backed up a first-round 69 with a second-round 68 Friday to take the outright lead by one shot over Mexico’s Alvaro Ortiz and Peru’s Luis Fernando Barco at the LAAC.

After a bogey on his eighth hole and sitting at 1 under, Delgado found a spark in the form of an unlikely up-and-down par from against the lip of a greenside bunker at No. 9. Instead of going for the hero shot, Delgado took his medicine, blasted out beyond the pin and then rolled in a 30-footer to save his par and make the turn in 35.

“That gave me a ton of momentum going into my back nine,” he said.

From there, Delgado birdied Nos. 12 and 14, and holed out for another from the bunker at 17 to shoot 4 under for the day and reach 7 under for the week.

“After No. 9, when I made that putt, I knew I had something going,” Delgado said. “Over that second nine, I hit the ball probably perfect.” After so many close calls — and some wacky travel issues — Mexico’s Alvaro Ortiz is staring at his last chance to punch a ticket to Augusta National, at least as an amateur.

You have to scroll pretty far down the World Amateur Golf Ranking – all the way to 1,455th – to find Delgado. But he’s already won on this iconic course. He took the National Junior Championship two years ago here on the Teeth of the Dog and feels very comfortable on a course that specializes in making players feel uncomfortable.

Delgado, who is playing in his first LAAC, lives roughly two hours away in Santo Domingo and has played multiple other junior events here. He has also been practicing at Casa de Campo since August, when the club opened its doors to participants in advance of this event.

It’s not his home course, but he does call it his “second home course.”

“Casa de Campo has been great to us,” he said after his first round. “We are extremely thankful to be able to come out and practice as much as we want. … I’ve been preparing for this event for a while on this course, trying to know it as much as possible.”

Delgado returned to the Dominican Republic in August after spending two years in Dallas at the Jim McLean Golf School. He wanted to be with his family before he returns to the U.S. to start his college career at UCF next fall.

He’ll be chased over the weekend by two players six years his senior – Ortiz, the Arkansas graduate from Mexico, and Barco, the Purdue grad from Peru. Ortiz was the pre-tournament favorite given his history at this event, and Barco arrived as the highest-ranked player in the field, 24th in the WAGR.

It remains to be seen whether Delgado will be able to ride his local knowledge to the winner’s circle – and later down Magnolia Lane – but he isn’t getting ahead of himself. Just as he made the right play on No. 9, he’s saying all the right things.

That there’s a long way to go.

That it’s an honor just to be here.

“I talked to (UCF coach Bryce Wallor) last night,” Delgado said. “He just said, ‘Great playing today.’ Then the assistant coach texted me and said, ‘Looking forward to seeing you this week on ESPN.’ It was fun receiving that text.” 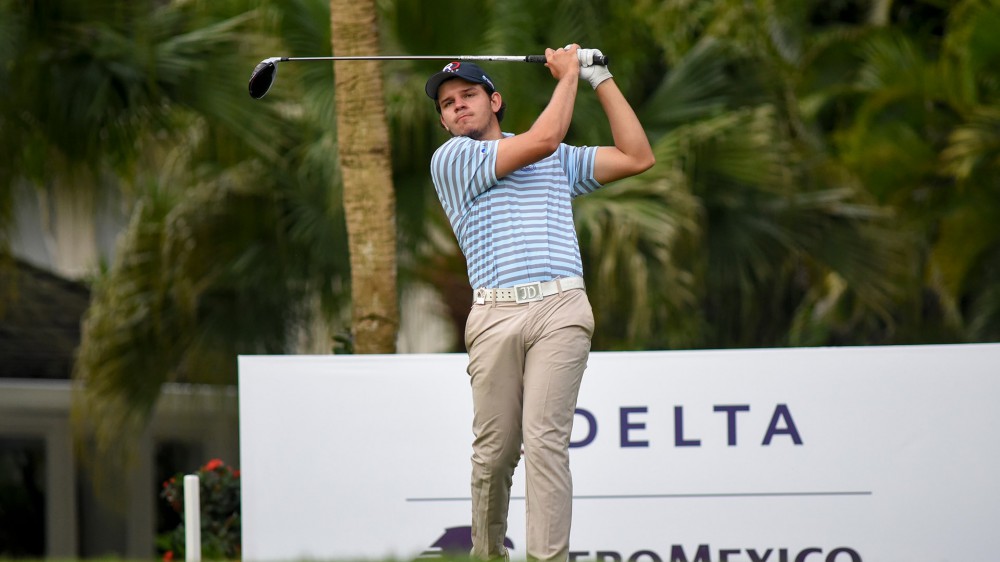