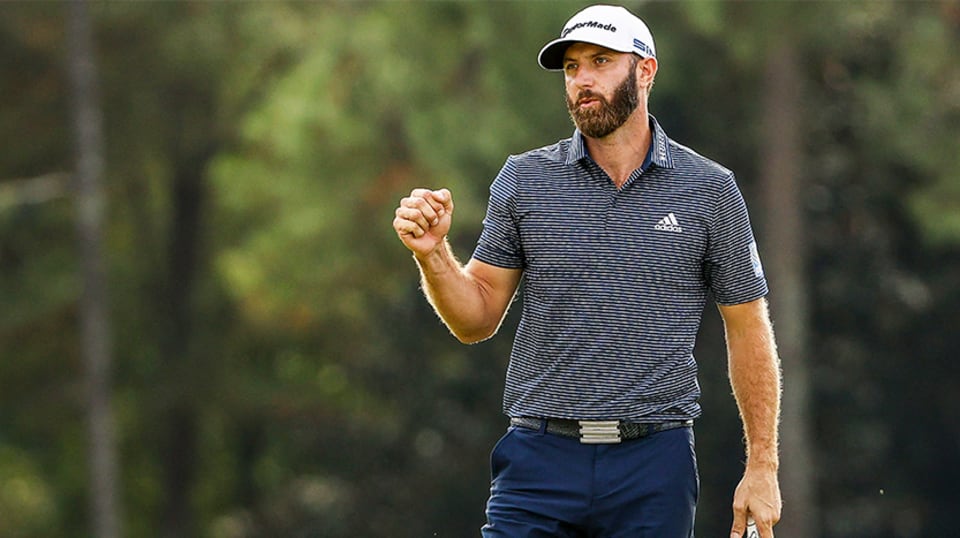 By the time Smith, marching up the 15th fairway, looked back and saw that it was Johnson who was close to the pin on the 14th green, it was all but over. Smith frowned and looked down at the grass, Johnson made the six-foot putt, and the lead was five strokes with four holes remaining.

This rain-delayed, pandemic-delayed Masters was essentially over. Was Johnson’s arrival on this stage, the green jacket ceremony in Butler Cabin, also delayed? Not really. Before Woods, it was widely accepted that golfers peaked in their 30s. By that metric, Johnson is right on time.

This is what he had in mind all those years ago when he honed his game at Weed Hill driving range in Columbia, South Carolina, just an hour or so from Augusta National. Johnson knew of the special tournament just down the road, even if he never had the connections to actually play here until he qualified for his first Masters in 2009.

“Obviously growing up in Columbia, in high school, I hit a lot of golf balls at Weed Hill,” he said in a rare reflective moment. “So definitely remember hitting up there in the dark. They had lights on the range, and most nights I would shut the lights off when I was leaving.”

It paid off. Johnson was twice a first-team All American at Coastal Carolina, where he won seven times, and his immediate success on TOUR was not unexpected. He won the 2008 Turning Stone Resort Championship and kept winning each year like clockwork from there. He had major championship type game, but the majors eluded him, sometimes gruesomely.

All anyone wanted to talk about at Augusta was his 0-for-4 record closing them out when he had at least a share of the 54-hole lead – the gum on his shoe since the 2010 U.S. Open at Pebble Beach, when he lost his three-shot lead with a second-hole triple bogey, shot 82, and finished T8.

He almost atoned for his mistake at the PGA Championship at Whistling Straits two months later, but unintentionally grounded his club in a bunker on the 72nd hole. The ensuing two-stroke penalty kept him out of a playoff with Bubba Watson and eventual champion Martin Kaymer.

Johnson had one hand on the trophy at two other U.S. Opens, but couldn’t keep the lead there, either. A fellow player, of all things, mentioned these lapses when Johnson took the lead into the final round of the PGA Championship at TPC Harding Park in August, and it happened again. The snakebit leader shot a solid 68 only to lose to 23-year-old Collin Morikawa (64) by two.

But good luck asking Johnson to get worked up about any of this.

“That stuff doesn’t bother me,” he has said more than once.

He just keeps on giving himself chances. The Masters marked the fifth time in his last seven TOUR starts that Johnson had held the 54-hole lead/co-lead, a run in which he’d already won THE NORTHERN TRUST and TOUR Championship to take the FedExCup.

He also lost a wild head-to-head showdown with Jon Rahm at the BMW Championship.

“I think I’ve got a good game plan,” Johnson said from the stately, wood-paneled interview room in Augusta’s cavernous press building Saturday night. “I’m not going to change it.”

And he hasn’t. Instead of getting into a war of words over his major letdowns, the Johnson way has been to answer with blistered drives, laser-like approaches, and an improved putting stroke built with input from his caddie/brother Austin, and a lesson from World Golf Hall of Famer Greg Norman. And now he’s gone and converted a 54-hole lead at the major players covet most just three months after his fitness for doing so was questioned more publicly than ever.

Norman, of course, never did win here. He bled away a six-shot advantage and more to lose to Nick Faldo in ’96. Rory McIlroy collapsed on the back nine and carded a final-round 80 in 2011, and Jordan Spieth quadruple-bogeyed the 12th hole to lose in 2016. Both lost four-shot leads.

There are no guarantees at Augusta, or anywhere. At the 2017 World Golf Championships-HSBC Champions, Johnson shot 77 and became the second player in TOUR history to lose a six-shot 54-hole lead. He won the Sentry Tournament of Champions in his next start, five weeks later. Johnson is like the metal man in “Terminator 2” who keeps moving ever forward even as he keeps getting holes blown through him. He forgets quickly. He’s a fast healer.

This was Johnson’s second major (2016 U.S. Open) and 24th TOUR win. He pulls even with Woods for most consecutive seasons with a win to start a career with 14, and moves from 17th to first in the FedExCup, which is where he ended last season. We are seeing the peak years of perhaps the most gifted golfer of his generation; Johnson’s best may be better than anyone else’s.

The Weed Hill driving range closed in 2015, sold for development. But Bobby Weed, who built it when he was in high school to work on his own game, has gone on to a successful golf course design business. Johnson, meanwhile, glides and strides ever forward into the golf history books.

His clubs have never spoken so loudly.