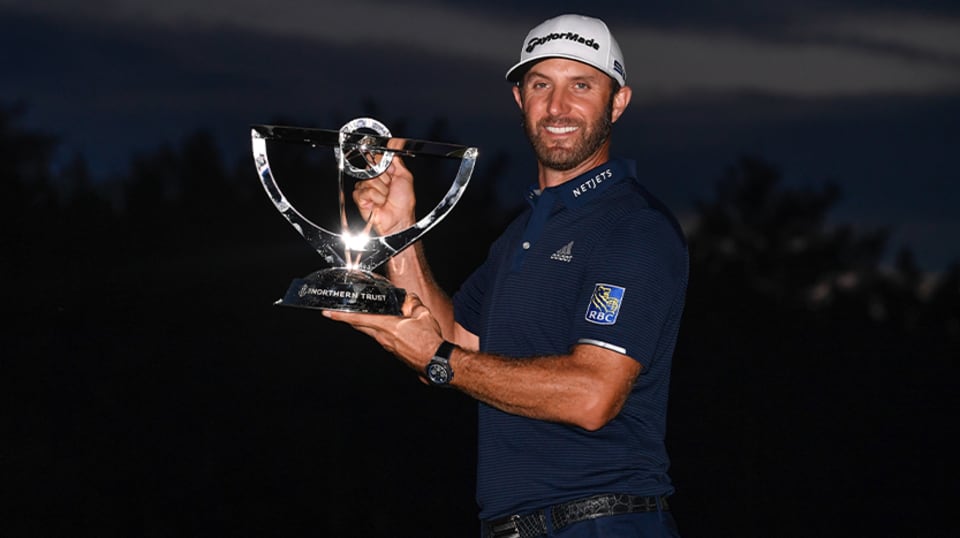 NORTON, Mass. – His laser show of ball-striking prowess utterly overwhelming in THE NORTHERN TRUST, Dustin Johnson was forced from TPC Boston late in Sunday’s final round by the ferocity of Mother Nature.

Impressive as that thunderstorm was, it lasted just 75 minutes and wasn’t about to put a halt to this dominating performance that Johnson had been putting together for four days in the FedExCup Playoffs opener.

So, with the lights out, a light rain falling, and evening upon the TPC Boston stage, Johnson returned to apply seven more strokes to a masterful performance that came close to setting records in a variety of ways.

Closing with a bogey-free 8-under 63, Johnson finished in 254
strokes, one off the 72-hole aggregate record, and at a beefy 30-under,
again one shy of the PGA TOUR record for four rounds. As wonderfully as
Harris English performed (64-66-66-69), he played a role that others
used to have when Tiger Woods was in his 2000 prime.

But regarding
Johnson’s inability to establish the records, no one was offering
condolences. Not when this 36-year-old freak show who is equal parts
power, precision, and uncanny consistency tossed down numbers in an
awe-inspiring performance that even met the man’s approval.

“My
ball-striking was unbelievable,” said Johnson, who at the end of 72
holes was ranked No. 1 in proximity to the flagstick with approaches, an
impressive 28 feet.

When you couple that ball-striking brilliance
with the fact that he hit all 18 greens Sunday after having hit 15, 17
and 15 each of the previous rounds; that he led the field by requiring a
mere 104 putts; that he was No. 1 in Strokes Gained: Tee-to-Green; that
he was tied for third in driving distance; and that he has been
certified as unflappable, well … it didn’t seem to be a fair fight.

And, oh, how his numbers put a polish on his performance.

• He had at least one eagle each round, five in all. Sunday’s came at the
par-5 second as he wasted little time in building upon the five-stroke
lead over Harris English with which he began.

• With his second
win of the year, Johnson is now sitting with 22 career victories, tying a
legend of the previous generation, Raymond Floyd, as well as two
classic names from years gone by, Johnny Farrell and Jim Barnes.

• After a relatively pedestrian start on Thursday left him 4-under and tied for 20th and three off the lead, Johnson played his first 11 holes Friday in
11-under, then the next in 15-under. For the week he had 23 birdies, five eagles, and three bogeys that were like gnats, barely noticeable.

• As
always, it is worth mentioning that Johnson has won at least once in
every one of his 13 PGA TOUR seasons, the sort of remarkable consistency
that is rarely seen in this era of deep fields.

• Given that
there were so many layers of excellence delivered by Johnson, it was
nearly lost in the falling darkness that he returned to No. 1 in the
Official World Golf Ranking.

• And before the critics bemoan the
power game that is pro golf in the year 2020, study a stat that deserves
attention. Johnson beat the field scoring average by 2.328 on Thursday,
then simply went silly. He was 9.529 better than the field average
Friday, 5.329 better Saturday, 6.343 better on Sunday, and 5.882 better
overall. Digest. Marvel. Admire.

All of this coming, by the way, a
few weeks after folks would suggest that Johnson did what he seems to
do frequently – he let a chance to win a major championship get away.
His history at the biggest tournaments has been well-chronicled, but the
2020 PGA Championship at TPC Harding Park should go down as one that
Collin Morikawa won, not that Johnson lost.

And what he did at TPC
Boston should go down as definitive proof that the man’s picture should
be in the dictionary next to the word resilient.

How does he
explain his ability to shake things off, to not let anything bother him?
To pile excellence onto disappointment time and time and time again?

“It’s
pretty easy when we’ve got big tournaments every week,” he said. “I
didn’t feel like I really did anything wrong at the PGA. It wasn’t
something that I was disappointed in.”

If there was one final goal
for him Sunday, it was to reach 30-under, because “I’ve never shot
30-under for four rounds.” So, in the darkness and with only a few dozen
folks watching, Johnson got it up-and-down from in front of the green
at the par-5 18th and reached that magical number.

Only it wasn’t magical enough. The record is 31 under.

Unruffled as ever, Johnson laughed.

There was good laugher on the virtual press conference, but don’t be surprised if he means it.

There will be a next time.