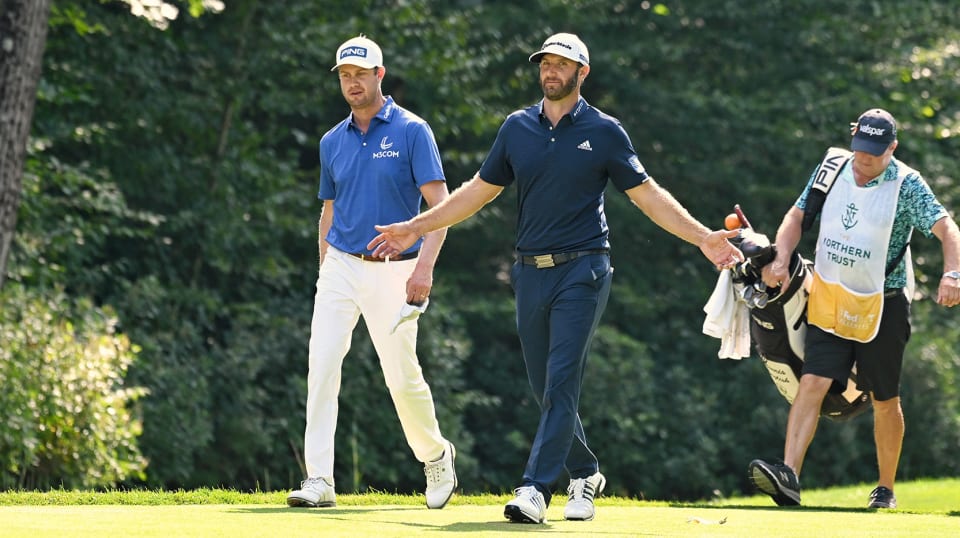 NORTON, Mass. (AP) — Dustin Johnson looked dominant as he ever as, and nothing could stop him Sunday in THE NORTHERN TRUST.

Not even the weather.

Johnson played the final two holes in near darkness after a late storm delay and finished with a birdie for an 8-under 63 and an 11-shot victory over Harris English.

It was the 22nd victory of his PGA TOUR career, and he never made it look easier. Johnson won his fifth FedExCup Playoffs event — tied with Rory McIlroy for most — and now leads the FedExCup standings and also returned to No. 1 in the world. He finished at 30-under 254.

Staked to a five-shot lead over Harris English going into the final round, Johnson sent a towering 7-iron over the water to a front pin on the par-5 second, the ball settling 8 feet next to the pin for an eagle. Two holes later, his 3-wood was placed perfectly in front of the fourth green for a simple up-and-down for birdie.

He led by five and went out in 30, stretching his lead to seven shots at the turn. On the 500-yard 12th hole, where on Saturday he hit a tight draw with a 6-iron to a foot, this time he hit a slight fade with a 6-iron to 3 feet for anther birdie.

The only drama was whether he could set two PGA TOUR scoring records — 31-under par by Ernie Els at Kapalua in 2003, and the 253 by Justin Thomas at the Sony Open in 2017.

But after that birdie on the 12th put him at 29 under, Johnson settled into four straight pars. He is only the third player to finish 30 under, joining Els and Jordan Spieth, also at Kapalua. So he at least owns the record on the mainland.

It was reminiscent of Friday, when he was 11 under through 11 holes and the only question was whether he could become the first player to shoot 57. He made seven straight pars for a 60.

This closing stretch was different. Johnson cares more about trophies than records, and getting his round finished was all that mattered.

It was like that three years ago at Riviera, when he was poised to break Lanny Wadkins’ 72-hole record at Riviera, the longest standing on the PGA TOUR schedule. But he finished with three bogeys over the last 10 holes playing conservatively, and only later said he didn’t know what the record was. Nor did he care.

English tried to hold his own, three times matching birdies with Johnson. He finished with a bogey that didn’t matter, shot 69 and moved to No. 6 in the FedExCup. English started the year without a full card. Now he has locked up a spot in the TOUR Championship.

There’s just no stopping Johnson when he puts all parts of his game together, particularly the irons. Johnson didn’t miss a green in the final round.

Kevin Kisner, who grew up playing junior golf with Johnson in South Carolina, has seen this all before.

“He can absolutely dismantle a golf course when he’s on,” Kisner said. “I’ve been watching it for 25 years. I’m pretty accustomed to it. When he’s on, I just step to the side and try to add to my bank account.”

Kisner did that part well. He closed with a 66, well enough that he is in good shape in his bid to lock up a spot in the TOUR Championship. He had said all week he wanted to take care of that at the TPC Boston instead of having to deliver next week in the BMW Championship at Olympia Fields, a course he has never seen.

The top 70 in the FedExCup advance to the BMW Championship, and there was one shot that mattered when play resumed. Louis Oosthuizen at No. 99 in the standings was in the 18th fairway, easily in range of the green on the par-5 closing hole. He managed a two-putt birdie in the dark to lock up the 70th spot.

Robby Shelton closed with a 63, enough for him to be among six players who moved into the top 70. The others were Oosthuizen, Harry Higgs, Alex Noren, Russell Henley and Jason Kokrak. Five of the six players knocked out missed the cut, including Phil Mickelson. The other was Denny McCarthy, who shot 73 on Sunday.