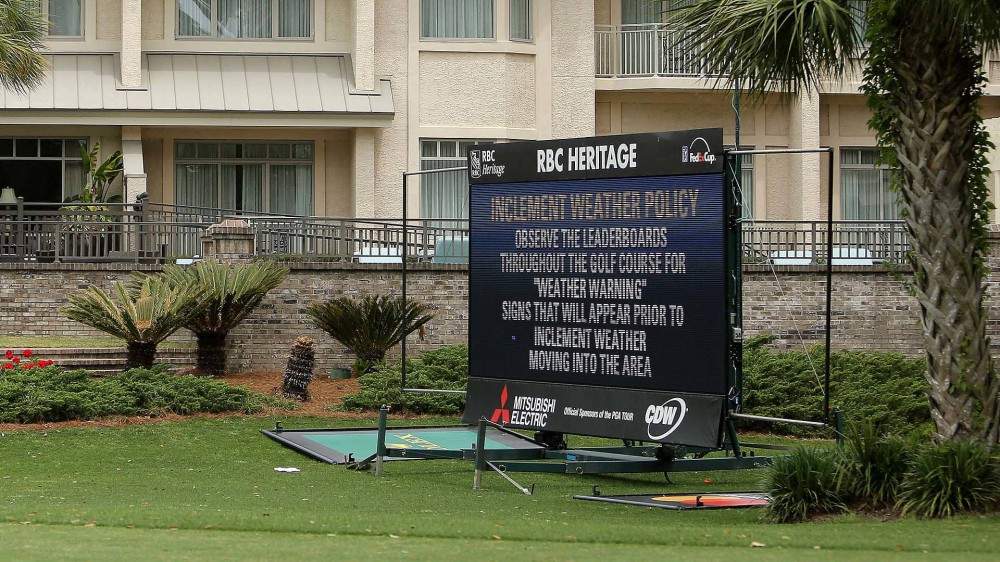 The second round of the RBC Heritage was suspended just before thunderstorms rocked Hilton Head Island on Friday, and while the strong winds and rain will turn the event into a marathon weekend finish for some, others got lucky … and they seemed just fine with that.

As the rain poured down and players and fans cleared out of Harbour Town Golf Links, some players were downright giddy to avoid the bad weather altogether.

“The guys I think will be caught up in the bad weather that’s coming across, looks pretty nasty. I’ll be chilling at home,” said Ian Poulter, who sits at T-4 after a second-round 67. “It’s not an easy afternoon for those guys. I’ve done my bit and now I can relax.”

Matt Kuchar took it a step further, saying not only that he’d be at home, but that he was going to tune in to watch the carnage.

“The afternoon guys, I know it’s tough out there, this is one of those days when you look forward to getting back on the couch and watching the guys deal with it,” Kuchar said after a second-round 69 put him at 4 under for the event. “It’s one of those struggling days where you have gone through your own struggles and fun to watch your friends go through it, as well.”

While play was halted for the worst of the weather moving through the area, the second round is set to resume Friday as soon as tournament organizers deem the course safe for players.

Play @RBC_Heritage will resume at 4:30 p.m. The driving range is currently open. #pgatour

And while a good chunk of the field will try to get as many rain-soaked holes as possible in before dark, a few lucky ones will be watching the action like your average PGA Tour fan – with their feet up and a big smile on their face.