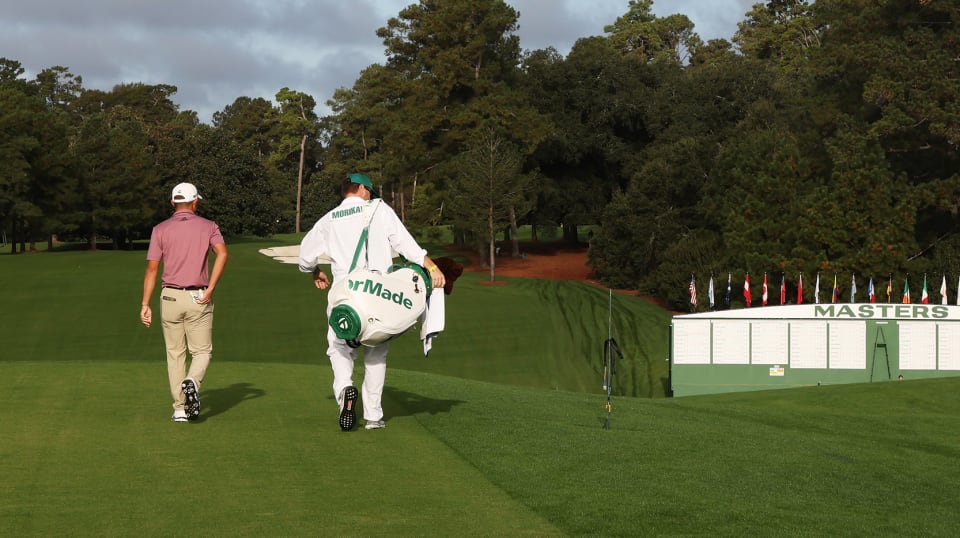 AUGUSTA, Ga. – Each day leading up to the tournament, PGATOUR.COM staff will provide a notebook on what’s happening on the grounds of Augusta National for this unprecedented November Masters. New notes will be added throughout the day. Tiger Woods is the defending champion.

ELDER WILL BE HONORARY STARTER IN 2021

Lee Elder, the first African American to compete in the Masters 45 years ago, will join Gary Player and Jack Nicklaus as an Honorary Starter for the 2021 Masters.

Elder paved the way in 1975 and then played for five consecutive Masters from 1977 through 1981 with a best finish of 17th in 1979. During his first attempt he received racial abuse and even death threats as he crossed the color divide but persevered as he had done throughout his career. The four-time PGA TOUR winner will now return to the first tee.

“The opportunity to earn an invitation to the Masters and stand at that first tee was my dream, and to have it come true in 1975 remains one of the greatest highlights of my career and life,” Elder said. “So to be invited back to the first tee one more time to join Jack and Gary for next year’s Masters means the world to me.”

Augusta National also revealed the creation of the Lee Elder Scholarships at Paine College, a Historically Black College and University located in Augusta. Two scholarships will be awarded annually, one each to a student athlete who competes on the men’s and women’s golf team.

“It also gives me great pride to know that my first Masters appearance continues to make a positive impact on others,” Elder said. “Throughout my career, helping young men and women achieve their dreams through education has been a cause close to my heart. I am deeply honored to share a connection with Paine College and these scholarships, which will provide life-changing opportunities for the deserving recipients.”

Fred Ridley, the Chairman of Augusta National, said these honors were just the start of what they hoped could be done to help the cause of racial injustice in America.

“The courage and commitment of Lee Elder and other trailblazers like him inspired men and women of color to pursue their rightful opportunity to compete and follow their dreams. But in reality, that opportunity is still elusive for many. We have a long way to go, and we can and we must do more,” Ridley said.

“Through this partnership, we look forward to further cultivating our relationship with Paine College, helping the school create its first women’s golf program and celebrating Lee Elder’s distinguished legacy through these scholarships.

“Mr. Elder’s participation in the Honorary Starters Ceremony next April will recognize his courageous life and commemorate all he has done in his career to help eliminate barriers and inspire Black men and women in the  game of golf and beyond.”

The Masters announced a change to the cut rule for the first time since 2013 with players within 10 strokes of the lead no longer automatically afforded weekend play at Augusta National.

Speaking of the weather, here is the Monday morning forecast:

“Dry conditions will continue this morning under partly cloudy skies. Expect a mix of sun and clouds this afternoon with an isolated shower possible after 2 p.m. Tropical Storm Eta is currently centered to the northwest of the Florida Keys and will slowly drift off to the west-southwest over the course of the day. Tropical moisture will spread across the Central Savannah River Area (CSRA) over the next several days as Eta lingers over the eastern Gulf of Mexico.

“An isolated shower will become possible after 10-11 a.m. Tuesday before increasing to a scattered coverage of showers after 1-2pm. A cold front will move into northern Georgia on Wednesday and will approach the CRSA on Thursday, producing areas of rain and the potential for isolated afternoon thunderstorms. There remains considerable differences in the model guidance Friday through the weekend, but at this time it appears the frontal boundary will stall across southern Georgia – keeping the potential for scattered showers in the forecast through the weekend.”

GARCIA, NIEMANN OUT WITH COVID-19

Former Masters champion and recent Sanderson Farms Championship winner Sergio Garcia has withdrawn from the Masters due to a positive COVID-19 test.

It is the first major championship Garcia has missed since the 1999 U.S. Open, ending a run of 84 consecutive major appearances. Adam Scott, due to play his 75th consecutive major this week, now holds the longest current active streak.

Garcia joins Joaquin Niemann as players out of the Masters thanks to COVID-19. “On Saturday night after driving back from the Houston Open, I started feeling a bit of a sore throat and a cough. The symptoms stayed with me on Sunday morning so I decided to get tested for COVID-19 and so did my wife Angela,” Garcia said via statement.

“Thankfully she tested negative, but I didn’t. After 21 years of not missing a Major Championship, I will sadly miss @themasters this week. The important thing is that my family and I are feeling good. We’ll come back stronger and give the green jacket a go next April 👊🏼”